The recent announcement that former Haitian dictator Jean Claude Duvalier will stand trial for corruption charges related to his embezzling of millions of dollars, but not for his role in the murder, disappearance and torture of thousands during his presidency has sparked outrage throughout Haiti and from human rights advocates across the world.
Tweet
Kevin Edmonds 2/8/2012

The recent announcement by Judge Carves Jean that former Haitian dictator Jean Claude Duvalier will stand trial for corruption charges related to his embezzling of millions of dollars, but not for his role in the murder, disappearance and torture of thousands during his presidency has sparked outrage throughout Haiti and from human rights advocates across the world. 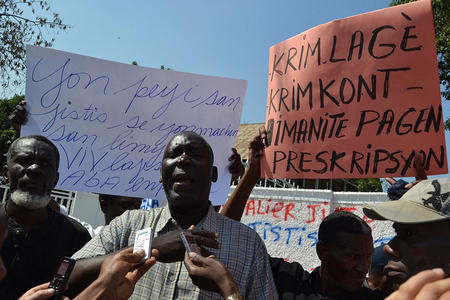 "Photo Credit: Gaetant Guevara/Let Haiti Live"Without question the announcement sends the wrong message to a nation looking to rebuild and restore confidence not only in its public institutions, but also to demonstrate that the rule of law does indeed stand for something, signalling that no individual is beyond justice—no matter how powerful. If Haiti is to move forward, and have a chance to overcome the injustices of history, the prosecution of Duvalier for the many horrific human rights abuses against the Haitian people must occur.

Judge Jean’s decision to drop the most serious charges against Duvalier was based upon his reading of the Haitian constitution, which cited that the abuses fell outside of the 10 year period outlined in the statute of limitations. This has led to a situation whereby both parties are appealing the decision of Judge Jean—the dozens of plaintiffs are protesting the exclusion of their testimony, and the defense is calling for the embezzlement charges to be dismissed as well.

Mario Joseph, an attorney with the Bureaux des Advocates Internationaux challenged the decision on behalf of the victims, reminding Judge Jean that he “cannot decide only on the financial crimes committed by Duvalier. He should also be tried and sentenced for rapes, torture, disappearances, assassinations, and crimes against humanity his regime has been responsible for.” Joseph also criticized the professionalism of the investigating judge, saying that he "made so many errors" and also disregarded the testimony of eight people who wanted to file complaints against Duvalier, and made it clear that “We have witnesses now from when my clients were beaten and tortured, witnesses who saw them being beaten and arrested, who saw what happened in the prisons.”

The sharp criticism by Joseph not only highlights the problematic nature of how Judge Jean came to his decision, but also that international law prohibits charges related to human rights abuses from being dropped. In May 2011, the Inter-American Commission on Human Rights (IACHR) released a statement highlighting that “the tor­ture, extra­ju­di­cial exe­cu­tions and forced dis­ap­pear­ances com­mit­ted dur­ing the regime of Jean-Claude Duva­lier are crimes against human­ity that, as such, are sub­ject nei­ther to a statute of lim­i­ta­tions nor to amnesty laws.” According to Amnesty International, what categorizes the crimes committed by Duvalier as crimes against human­ity and not as routine criminal charges, is that “they were com­mit­ted as part of a sys­tem­atic or wide­spread attack against the civil­ian population.” For a partial chronicle of the extensive human rights abuses linked to the Duvaliers see here.

There are also many actors that are arguing that the reasoning for Judge Jean’s decision is politically motivated, and that a more detailed explanation must be given in order to clarify and justify his reasoning to dismiss the most serious charges. On February 1, the IACHR provided the gov­ern­ment of Haiti a request of infor­ma­tion regarding the judi­cial decision. Brian Concannon of the Institute for Justice and Democracy in Haiti also remarked on the role politics played in Judge Jean’s decision, stating that “When you look at the fact that a prosecutor under President [René] Préval instructed the judge to aggressively investigate the case, after which a mountain of evidence showing Jean-Claude Duvalier's responsibility was introduced, and then a new prosecutor under President [Michel] Martelly ruled without an adequate explanation that there is not a case, it’s a fair assumption that this dismissal was politically motivated.”

A deeper examination of Martelly’s statements reveals that the assumptions of these human rights organizations are well justified, as Martelly has expressed several times his intention to pardon Duvalier. In a pre-inaugural interview with the Montreal daily La Presse on April 18 Martelly proposed a plan of national reconciliation that would include granting amnesty to Duvalier. More recently, when asked about moving forward with the Duvalier case, Martelly told The Washington Post this January that “It is part of the past. We need to learn our lessons and move forward . . . It is time to unite the country, show tolerance, show compassion, show love for everyone . . . [we  need] to reconcile the factions that have been at war.”

Martelly would go on to quickly retract both statements, but clearly revealed himself to be in favour of amnesty. Despite Martelly’s intentions, the established norms of international law make it very clear that no statute of lim­i­ta­tions may apply to crimes against human­ity and the alleged per­pe­tra­tors can­not ben­e­fit from amnesties, even in the case of for­mer heads of state. Regardless of Martelly’s belief that reconciliation instead of a trial will help heal the nation, the experiences of nations as varied as South Korea, Peru, Argentina, and Chad show that the trials of former dictators do more to close wounds than to re-open them.

The present failure on behalf of the Haitian government and the international community to push for more serious charges sets a dangerous precedent for Michel Martelly and all future Haitian heads of state to avoid consequences for abusing their power. The recent statements by Martelly concerning the reestablishment of the Haitian army raise serious concerns about this, as the Haitian army has always been used as a tool of brutal internal repression. It would be naive to assume that the latest reincarnation would be any different. Concannon goes on to explain this more fully, remarking, “The prosecution of Duvalier is a once in the life time opportunity to establish deterrence for political violence and corruption. Passing up this opportunity confirms the precedence of impunity for large scale killings and theft. This is one of the reasons Martelly wants this, he does not want the precedent of consequences for leaders in Haiti.”

Concannon’s remarks confirm that the outcome of this trial weighs heavily upon Haiti’s near future. If the appeals of Duvalier’s victims are not taken into consideration, the maximum penalty under Haitian law for misappropriation of funds is five years. On the other hand, a conviction for human rights abuses could potentially put him away for life. The third alternative of the case being dismissed altogether is too outrageous to imagine. Despite the outcome, it can be assured that the decision would ripple throughout all strata in Haiti, for better or worse. This long term and far reaching impact is precisely why observers like Reed Brody of Human Rights Watch have remarked that “The Duvalier trial could be the most important criminal case in Haitian history.”

The trial of Jean Claude Duvalier carries both significant concrete and symbolic value for Haiti. Looking at the recent history of Haiti, there have been some significant legal trials (Les Cayes Prison trial this year and the Raboteau trial of 2000) which have helped to restore a level of confidence in the justice system. The most serious problem is that the restoration of confidence has not been a continuous process. It has been interrupted too many times, most notably by two coup d’etats, the 2010 earthquake which destroyed most of the government infrastructure, and also the deeply flawed elections that brought Michel Martelly to power.

While the process of strengthening the rule of law and institutions has been violently interrupted many times and in different ways, the conviction of Duvalier would provide an important psychological boost to the country, and show that reconstruction is not simply a bricks and mortar issue. Yes, buildings can be rebuilt, but what is more important is that the ideals and values housed in these institutions are of great importance as well. This is why it is critical for those concerned with justice in Haiti and abroad to demand that the Haitian justice system regard lives taken by Duvalier during his rule as much more valuable than the money he stole. To do otherwise is to deeply insult the Haitian people by letting Jean Claude Duvalier literally get away with rape and murder.