Deconstructing the Colombian Government’s Latest Offensive Against the FARC

During the last week and yesterday the Colombian government carried out a pair of bombing raids on camps of the Revolutionary Armed Forces of Colombia (FARC), killing over 60 guerrillas. The government offensive is strategically significant. The production of the country’s oil is largely concentrated in the region of the raids, where big interests are at stake.
Tweet
Nazih Richani
Cuadernos Colombianos
3/27/2012

During the last week and yesterday morning the Colombian government carried out a pair of bombing raids on camps of the Revolutionary Armed Forces of Colombia (FARC) in the departments of Arauca and Meta. According to Colombian officials, the attacks have killed over 60 guerrillas. The government offensive is strategically significant. The production of the country’s oil is largely concentrated in Arauca and Meta. Since the 1960s, Meta has historically been a FARC hotbed with strong social ties to the local population. Colombia’s largest proven oil reserves are in Meta, and the Canadian multinational corporation Pacific Rubiales is extracting 240,000 barrels a day from its oil fields in Meta. This company has been targeted by the FARC, and the Juan Manuel Santos government has accused the guerrilla of being behind the worker’s strikes last year.

In late February, nine oil workers were kidnapped from a subcontractor of the Italian company SICIM, which is working on the construction of the new Colombian Bicentennial Oil Pipeline, in the Arauca municipality of Tame. There has been a notable increase in the number of attacks on Colombian pipelines. According to the Colombian Ministry of Defense, during January and February 2011 only three attacks on oil pipelines occurred while in 2012 attacks increased to 22. Arauca’s Caño Limón-Coveñas crude oil pipeline has been the main target. Due to sabotage, the pipeline was operational for less than a third of the first 64 days in 2012. All of these acts have alarmed both extractive multinational corporations and the Santos government, which views the destabilization as a national security threat considering that Colombia is more economically dependent than ever on the extraction of oil, coal, and gold—its main sources of revenue.

Alejandro Martinez, president of the Colombian Oil Association, explained in early March that, in light of the insurgents operations, the Santos government has echoed the oil companies’ rising concerns. This, he said, will be translated into “changes in the national security strategy,” including the use of technology to minimize the number of troops on the ground. Currently more than 16,000 soldiers are located in Arauca to protect the oil infrastructure. 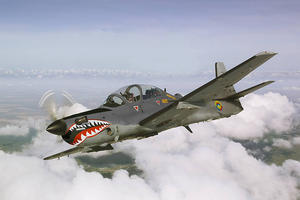 Colombian Super Tucano (defenseindustrydaily.com)Then, a week and a half ago, the FARC attacked the Colombian Army’s Eighth Brigade in the Arauca municipality of Arauquita, killing eleven soldiers. It was the last straw.

Using intelligence and air support from its Super Tucano Brazilian-made bombers, the Colombian government went on the offensive. Two units of the FARC were targeted. According to the Santos government, in an attack on the FARC in Arauca, 31 guerrillas were killed. On Monday, March 26, in a pre-dawn bombing raid on a FARC camp in Meta, officials say that another 36 rebels were killed.

All of this is happening against the backdrop of the FARC plan to release the last 11 soldiers and police on April 2 and 4. The question is whether these attacks could derail the release?

For now the FARC  has not made any signs that it might abort the prisoner release, but there are fears that the government attacks might be endangering the lives of the prisoners. Stay tuned.