March 6 marked the 15th anniversary of the death of Dr. Cheddi Jagan, the former President of Guyana and the hemisphere’s first democratically elected Marxist leader. While that distinction is often mistakenly associated with the election of Chilean President Salvador Allende, Guyana was not only the site of this historic election, but Jagan (not Jacobo Arbenz) was also the first leader in the Americas to fall victim to Cold War military intervention.
Tweet
Kevin Edmonds 3/29/2012 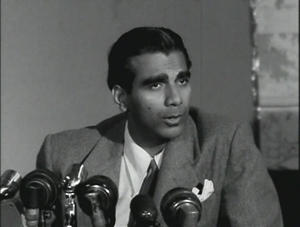 Cheddi Jagan. Photo Credit: Betty MillardMarch 6 marked the 15th anniversary of the death of Dr. Cheddi Jagan, the former President of Guyana and the hemisphere’s first democratically elected Marxist leader. While that distinction is often mistakenly associated with the election of Chilean President Salvador Allende, Guyana was not only the site of this historic election, but Jagan (not Jacobo Arbenz) was also the first leader in the Americas to fall victim to Cold War military intervention—as Iran’s Mosaddegh was overthrown several months earlier on August 19, 1953.

In the wake of widespread labour unrest throughout the Caribbean between 1935-38, the West India Royal Commission was established in order to investigate the socio-economic conditions of the British colonial territories in the Caribbean, and propose reforms to minimize the potential of future unrest. In a response to the Commission’s findings, during 1950-51, the British government agreed to the implementation of political reforms that would allow for universal suffrage and the formation of political parties, essentially allowing for self government in then British Guiana, but not formal independence. The arrangement was similar in most West Indian colonial territories, with power remaining in the hands of the British appointed governor.

That year, Jagan and his associates formed the People’s Progressive Party (PPP), and he was elected as the first Chief Minister in April, 1953. The PPP had been elected upon a pro-independence platform, stressing economic development and the creation of a socialist society. The new government, led by Jagan immediately set out to implement the numerous socio-economic reforms laid out in its popular election manifesto, ranging from the improvement of social services, to the implementation of workers’ rights and land reform. Such reforms were immensely popular amongst the Guyanese people, but stirred unease within more conservative circles, including the British colonial office.

Despite the fact that the British intelligence agency, MI5 concluded that the Jagan and the PPP were "not receiving any financial support from any communist organisation outside the country," the British government remained determined to squash the political movement, seeing it as a foothold for the Soviet Union in the region.

Despite his popularity, Jagan’s first political victory would be short lived, as 133 days later on October 5, the British government grew tired of Jagan’s “disruptive antics,” and were directed by Winston Churchill to go ahead with Operation Windsor. The operation called for the dispatching the HMS Superb and the landing a military force in Guyana, where they suspended the constitution and overthrew the democratically elected Government.

The aftermath of the coup would see the fracturing of the party along ethnic lines, with the PPP and the Indo-Guyanese aligning with Jagan, and the Afro-Guyanese population siding with former PPP Chairman, Forbes Burnham and his People’s National Congress in 1955. This split along racial lines has politically divided Guyana to this very day – and remains a prominent, polarizing feature of national politics.

Despite his arrest and placement under house arrest, Jagan remained the country’s most popular politician, and was re-elected in 1961. The democratic return of Jagan to power drew concern this time from the Kennedy administration, who implemented a covert program to reduce the popularity of Jagan and the PPP. At the time, Burnham was the president of the Guyana Labour Union, which would be used as one of the primary tools in the destabilization of Jagan’s government. The CIA began a destabilization campaign which instigated labor unrest, funding the striking workers, engaging in the dissemination of widespread disinformation and triggered race riots that left 170 people dead and thousands more injured. The head of the CIA operations in Guyana was Agent Frank Wisner, a veteran of the previously mentioned covert actions that overthrew Guatemalan President Jacobo Arbenz and Mohammed Mossedegh of Iran.

In the midst of the struggle, Jagan defended his course of action, remarking that “I believe that my first charge is to raise my people from the mire of poverty in which, for too long, they have suffered. I have never made any secret of my views. I have been thrown out of office. I have been subjected to violence, indignity and jail. I am willing to face these things again, and gladly, in the fight to free my people and aid them. Here I stand. Here I will stand until I die.”

Despite the numerous covert actions against Jagan, he remained in power until 1964, when he was finally defeated by Burnham (in a rigged election), despite winning the plurality of the vote. Once in power, Burnham went on to lead a 20 year dictatorship in which he intensified the racial divide amongst the Indo and Afro-Guyanese populations.

In 1966, while in opposition, Jagan reflected on the period of destabilization and it’s unfortunate outcomes, stating “The violence and disturbances of 1962 and 1963 did not succeed in their immediate objective of bringing about the fall of the government or the suspension of the constitution. But they did result, as we shall see, in the delay of independence and the imposition of a constitutional and electoral formula designed to bring the opposition to power. It was a major tragedy for Guyana that a section of the working class was deluded into forging its own chains by directing its attack not, as previously, against the capitalists and landlords but against a national, pro-working class, socialist-oriented government.”

It was later declassified that in the run up to the 1964 elections, Burnham and the PNC had received significant funding from the U.S. State Department, upwards of $2 million. After spending a total of 28 years in the government opposition, Jagan and the PPP won the 1992 election, finally becoming President of a politically independent Guyana. Once in power, Jagan remained committed to policies of environmental sustainability and human development—but like all previous times it would be cut short, this time with his tragic passing due to a heart attack in March, 1997.

The misconceptions about Allende’s role as the first elected Marxist leader reveals the unfortunate fact that Jagan is often overlooked in many of the discussions of progressive leadership and their contribution to independence, anti-imperialism and genuine development in the hemisphere. Often, the progressive contribution of Dr. Jagan—with his intense commitment to both democracy and socialism, and the immense obstacles faced by him are often lost and overshadowed in contemporary times by the previously mentioned figures like Allende or Arbenz, or his counterparts Michael Manley, Maurice Bishop, and Jean Bertrand Aristide in the Caribbean. The reality is that with the exception of Haiti—Guyana has been the site of some of the most significant military intervention in the Caribbean, with consequences which have impacted the nation’s efforts to break the cycle of dependency and foster cooperation amongst its population. Dr. Jagan should be remembered for both his efforts to make Guyana a truly independent and more equal society, and as a symbol of what could have been and how far the (neo) colonial powers—the United States and the United Kingdom will go to undermine the possibility of democracy in the Caribbean.