According to a recent report, about 40% of Colombian land "has been licensed to, or is being solicited by, multinational corporations in order to develop mineral and crude oil mining projects." The extractive development is at the expense of food production, a profound shift in land use that puts the future of Colombia’s food security in jeopardy.
Tweet
Nazih Richani
Cuadernos Colombianos
4/10/2012

There are three main trends in the international political economy that are currently shaping land use and value. The first is the increasing demand for land from the emerging economies of China and India alongside Korea, Japan, and the petro-dollar states of Saudi Arabia, United Arab Emirates, and Qatar. These countries are buying and renting lands in Africa, Asia, and Latin America, particularly Brazil and Argentina, for bio-fuels and other cash-crops. The second and third trends are the increased use of land for mining and speculation. Land has become the hottest commodity on the global market. It is as if the world capitalist class has only just heard Mark Twain’s advice: “Buy land, they’re not making it anymore.”

Consequently more land is being put to the service of biofuel crops and mining. Over the last decade alone, over 560 million acres in Africa, Latin America, and Southeast Asia, that were previously dedicated to food production, are now catering to biofuels and mineral extraction. Mostly multinational corporations and sovereign funds now own this land, which is equivalent to the size of the combined territories of Britain, France, Germany, Italy, Ireland, Portugal, Spain, and Switzerland. The entire forested area of the United States, including Alaska, is almost 490 million acres. Perhaps with these figures we can appreciate the magnitude of these trends. 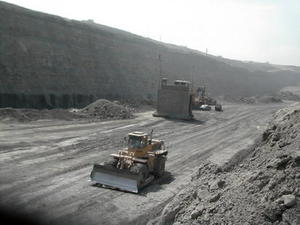 U.S.-based Drummond Co. coal mine in Colombia (Al.com)In February, the Colombian Geological Service issued a report in which it revealed that in Colombia, a mining rich country, 18 multinational mining companies own the rights to mine on over 12 million acres of land. This figure is a partial assessment and does not include the subsidiaries of these corporations. The gold mining companies Anglo Gold Ashanti and Mineros SA have the rights to the largest amount of land, according to the report. Combined they control about 59% of these areas. Other multinationals such Eco Oro (formerly known as Greystar) and Leyhat, both Canadian companies, are not far behind. The latter owns the rights to mine on nearly 100,000 acres in the Colombian departments of Santander and North Santander. Oil multinational corporations, which were not included in the report, were granted over 90 million acres for oil exploration and production across Colombia.

Meanwhile, Cargill, the world’s largest agribusiness, recently bought over 220,000 acres in the Colombian department of Meta where it is already producing grains. The Israeli company Merhav has invested $300 million in buying and preparing nearly 25,000 acres in Magdalena Medio for the production of sugar cane to produce ethanol.

In Colombia over 280,000 acres have been sold to foreign companies for biofuel crop production, as well as nearly 250,000 acres of forest land that is now owned by Timberland Holdings (Swiss-Ecuadorian company), Smurfit-Kappa (Irish), the Chilean-based companies Agrícola de La Sierra and Reforestadora del Sinú, and the Colombian companies Inverbosques and Forest First. According to the November 2011 Peace Brigades International Colombia Newsletter, today, 40% of Colombia's 280 million acres of land "has been licensed to, or is being solicited by, multinational corporations."

The far reaching implications of such a profound shift in land use puts the future of Colombia’s food security in jeopardy, as well as the livelihood of millions of people across the globe. If these trends are not reversed they are a major threat to global peace and security.