On April 19, The Washington Post’s editorial board published a cartoonishly hysterical rant titled “Argentina’s president rejects stepping into the future,” in reaction to the government’s re-nationalization of the Spanish-owned oil company, Repsol YPF.

Providing yet another example of the media's reckless attacks on left-leaning governments in the hemisphere, The Washington Post admonished President Cristina Kirchner for “continuing to pursue the autocratic populism she practiced before the election.” The autocrat, in this case, deigned to participate in last October’s free and fair presidential election, was reelected in an historic landslide, and had the temerity to continue the policies that gave her such strong approval in the first place.

The Post’s concern over the effects of “autocratic” tendencies on Argentine democracy is contradicted by the editorial board’s disdain for, well, Argentine democracy. The editorial doesn’t mention that there are more than 2.5 Argentine citizens who agree with the re-nationalization for every one citizen who disagrees (the company was state-owned for 70 years). The Post considers support for Kirchner’s re-nationalization “cheap domestic applause.”

But the breadth of approval for the nationalization has been remarkable, as The New York Times found:

The nationalization has been so warmly received here that Argentina’s Senate voted 63 to 3 early Thursday to take control of YPF, the country’s leading energy company, during a lengthy special session in which most senators used their allotted time to laud Mrs. Kirchner’s initiative. Some members of the political opposition from oil and gas-producing provinces came close to tears expressing gratitude for the measure. The expropriation bill will be taken up on May 3 by Argentina’s lower house of Congress, where it is also expected to pass by a large margin.

Even Carlos Menem, the former president who oversaw the start of YPF’s privatization in 1992, now supports the takeover. “The scenario has changed,” said Mr. Menem, now a senator.

The Washington Post is not always so scornful of public opinion in Latin American countries. In a 2007 editorial called “Assault on an Ally,” The Post stood up for right-wing Colombian president Álvaro Uribe, calling him “a defender of liberal democracy, not to mention a staunch ally of the United States.” It also rallied against his unscrupulous opponents within the United States—like Human Rights Watch. HRW stoked The Post’s ire when, according to the editorial, it “joined the Democratic [Party’s] campaign against Mr. Uribe” and “claimed that ‘today Colombia presents the worst human rights and humanitarian crisis in the Western hemisphere.’”

The important thing to keep in mind, according to The Post, was Uribe’s domestic popularity:

Colombian President Álvaro Uribe may be the most popular democratic leader in the world. Last week, as he visited Washington, a poll showed his approval rating at 80.4 percent . . . Democrats claim to be concerned — far more so than Colombians, apparently — with "revelations" that the influence of right-wing paramilitary groups extended deep into the military and Congress.

So there you have it: when an overwhelmingly popular (and non-lethal) policy is enacted by a left-of-center government, The Post says its leader is reaping “cheap domestic applause.” When a right-wing ally of the United States presides over a political condition that kills untold numbers of his own citizens, The Post defends him by trotting out his high approval ratings.

This tactic deflects attention away from the grim record of the Colombian state, which Uribe directed with U.S. tax dollars. In 2005, Amnesty International found that “the vast majority of non-combat politically-motivated killings, ‘disappearances,’ and cases of torture have been carried out by army-backed paramilitaries.” In another report, Amnesty estimated that in 2007 alone, at least 1,400 civilians were killed and as many as 305,000 Colombians were displaced—an increase in both deaths and displacements from the previous year. “Of the cases where the perpetrator is known,” Amnesty noted, state security forces “were responsible for at least 330 [extrajudicial executions], the paramilitaries for around 300 and guerrillas for about 260.”

Yes, this is where much of the $5 billion in economic and military aid from the Clinton and Bush administrations went. But if The Post’s selective use of poll numbers is to be believed, Colombians are far less concerned about it than you are.

Aside from The Post’s dismissal of Argentine public opinion, the YPF re-nationalization has prompted the newspaper to inveigh much more broadly against the Argentine government, and in the process, showcase the editorial board’s ignorance of basic economic trends. According to the editorial, Argentina has crossed the Rubicon, away from “global markets and the democratic world.” The authors predict that “Argentina’s isolation from the world, and from the economic progress of its neighbors, will continue to grow.” They conclude by warning of disaster, and suggest that rich countries should exact petty punishment on Argentina:

The curse that shadows this once-rich country is the inability of its political class to learn from its blunders — or from its neighbors. While Brazil and Mexico power ahead, integrating with the world economy and consolidating stable democracies, Argentina under Ms. Fernandez is headed inexorably toward another crash. While there is little the rest of the world can do to prevent it, one way to send a wake-up call would be to remove Argentina from the Group of 20, the supposedly elite club of nations that gathers to weigh world economic problems. Neighboring Chile, which has far surpassed Argentina in economic and political development, would be the ideal replacement.

It seems The Washington Post’s editorial board was unable to review the International Monetary Fund’s Regional Economic Outlook, which also came out in late April, before publishing the statement above. The report’s data (on page 31) basically disprove every substantive assertion in the editorial’s conclusion:

According to the IMF, Argentina is the wealthiest country in South and Central America, based on purchasing power parity. As Argentina’s current account, or trade surplus, shows, the country has engaged with the world economy on favorable terms (and much more regionally, due in part to being locked out of international credit markets). Argentina has also enjoyed far more equal growth than its neighbors, as its Gini coefficient indicates (the lower the number, the lower a country’s income inequality). The data also make it impossible to honestly state that Chile “has far surpassed” Argentina—or that Argentina has been left behind as Brazil and Mexico “power ahead.” That is, at least, if income, growth, and inequality are relevant factors. For The Post, apparently, they are not. 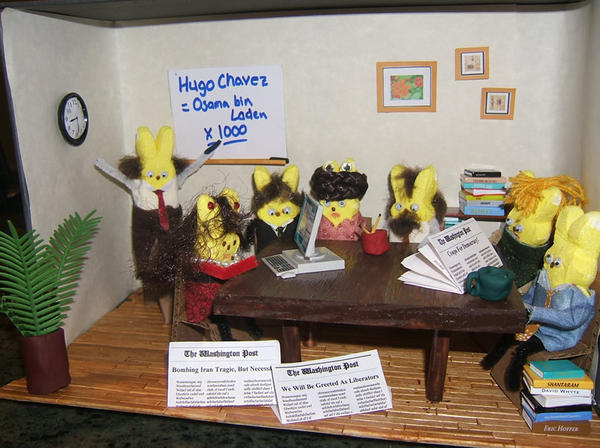 An artist's rendition of a Washington Post Editorial Board meeting (borev.net/2009/03/omg_its_a_washington_peeps_ed.html)

Keane Bhatt is an activist in Washington, D.C. He has worked in the United States and Latin America on a variety of campaigns related to community development and social justice. His analyses and opinions have appeared in a range of outlets, including NPR, The Nation, The St. Petersburg Times, CNN En Español, Truthout, and Upside Down World. This is the first post of his NACLA new blog titled “Manufacturing Contempt,” which takes a critical look at the U.S. press and its portrayal of the hemisphere.