Reportero: An Interview with Sergio Haro

Sergio Haro is a veteran reporter for Zeta, an independent newsweekly in Tijuana, Mexico. Haro has reported widely on organized crime and violence on Mexico’s northern border, and for his efforts, has worked under constant credible threats. He is the central figure in Reportero a new film directed by Bernardo Ruiz, which will be shown this Wednesday, July 18, at 7:30 PM at the Spanish Benevolent Society, 239 West 14th Street in Manhattan. The screening is a benefit for NACLA. Tickets are $20 and will be available at the door. What follows is a brief interview with Haro conducted this week by Fred Rosen.
Tweet
Fred Rosen 7/17/2012

Sergio Haro is a veteran reporter for Zeta, an independent newsweekly in Tijuana, Mexico. Haro has reported widely on organized crime and violence on Mexico’s northern border, and for his efforts, has worked under constant credible threats. He is the central figure in Reportero a new film directed by Bernardo Ruiz, which will be shown this Wednesday, July 18, at 7:30 PM at the Spanish Benevolent Society, 239 West 14th Street in Manhattan. The screening is a benefit for NACLA. Tickets are $20 and will be available at the door. What follows is a brief interview with Haro conducted this week by Fred Rosen. 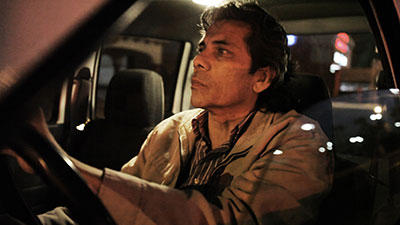 FR: One of the messages of Reportero is that one has to be very brave to work as a reporter in Mexico, especially on the organized crime beat. Do you think the constant threats and attacks—including murder—against reporters and editors has had the silencing effect desired by narco traffickers and organized crime?

SH: Yes, unfortunately they have had that effect but I wouldn’t say they are winning. Especially in the cases of Chihuahua, Sonora, and other northern states, yes, the attacks have had their effects, and there is less coverage of violence and trafficking, as I said in the documentary. So it’s like we are looking at a partial journalism. So I think we have to face the situation honestly and acknowledge that for us, the communicators, our responsibility is to inform. And for the authorities, their responsibility, in addition to solving crimes, is to provide safety for the population. I don’t think it’s viable for us to do nothing and for the authorities to do nothing.

There have been attacks, for example, the recent attack on the offices of a paper in Nuevo Laredo, and for example in Monterrey, in Tamaulipas, in Chihuhaua. Things have gotten so bad that a newspaper in Tamaulipas publicly asked the attackers what they wanted, what they wanted the paper to cover and not to cover. So all these attacks and killings of journalists have had their effects, but I think our responsibility is to report and analyze. We can’t sit back with our arms crossed and do nothing. We all have to confront the situation in an organized manner.

FR: Is there a significant difference in the coverage of the independent media and the big media monopolies?

SH: I think so. Obviously in the case of the monopoly media, I think you have to refer to the economic interests, commitments, the interests of politicians, in short to the question of power. The power that forms the political interests of these big groups is nothing strange. But our job is to inform our readers of the reality. We can’t have segmented reporting. We have to cover everything.

One of the cases that gives resonance to this question is the kidnapping of Diego Fernández de Ceballos [a former presidential candidate of the National Action Party (PAN)] about a year and a half ago, which led to Televisa’s announcement that it would not give the case any coverage until it was resolved. So what happens to those viewers who want to find out about the case? For several months they knew nothing about the case because the news media were not covering it, because Televisa, the principal source of news in the country had unilaterally decided not to cover it. But this was not a journalistic decision. It was a political decision. There were documents and letters in their possession that they chose not to make public. This was due to the arrangements that Televisa had with groups in power, perhaps with the party in power. I can’t say for sure but it was a political decision. The viewers and readers were entitled to that information.

Q: As I remember, the decision not to publish was made at the request of Jefe Diego’s family.

SH: Yes, but why in this case, when it involved a prominent person, did they obey those requests? What happens with the dozens of ordinary citizens who have been kidnapped over the past year? Their families don’t get the same treatment as the powerful. So the readers, listeners and viewers are only partially informed.

FR: Speaking of the powerful, in your opinion, how might the questions of violence and organized crime and violence be effected by the recent presidential elections in which the PRI [Institutional Revolutionary Party] seems once again to have come to presidential power?

SH: On the one hand, what I have seen as a reporter is that the powerful political and economic groups are happy with the so-called alternation of political power that has brought the PRI to the presidency. But there is very little hope that that the victory of the PRI represents a step forward. The PRI governments have generally been characterized as repressive, vertical, corrupt, but now people speak of a political change I think the new government of Enrique Peña Nieto is likely to be just like the past PRI governments.

And now that we hear that he plans to bring in advisors who have experience with crime and violence, for example in Colombia, but remembering the governance of the PRI in this country, this is not likely to change anything. I think it’s important that the civil groups and citizens keep on pressuring the government to act against the violence. In this regard I think that the way this question relates to journalists is that the attacks against us have motivated us to organize ourselves to report on the situation of crime and violence. We have to organize a strong national response, because if we leave it to the government, whether it’s the PRI or the PAN or even the PRD [the leftist Party of the Democratic Revolution], I don’t think they will have to ability or the motivation to get anything done.

FR: What do you think of the recently formed movements within civil society, like the one led by Javier Sicilia?

SH: Well, I think it is a good response, but it’s not sufficient given the situation in Mexico. I think it’s important to organize more groups like Sicilia’s Movement for Peace but now it’s a small percentage of the population that is organized in what has so far been an ineffectual response to organized crime.