Women In the Forefront of Bolivia’s TIPNIS Conflict

In the ongoing struggle against the Bolivian government’s plan to build a highway through the Isiboro Sécure Indigenous Territory and National Park (TIPNIS), lowland indigenous women have been on the front lines. Their protagonism has sparked controversy in a society where patriarchal traditions and attitudes still run deep, despite important recent advances.
Tweet
Emily Achtenberg
Rebel Currents
8/16/2012

In the ongoing struggle against the Bolivian government’s plan to build a highway through the Isiboro Sécure Indigenous Territory and National Park (TIPNIS), lowland indigenous women have been on the front lines. Their protagonism has sparked controversy in a society where patriarchal traditions and attitudes still run deep—despite recent advances, including the election of women to almost half of all local government posts, as mandated by Bolivia’s new constitution.

While media attention during the recent TIPNIS march focused on Fernando Vargas, president of the TIPNIS Subcentral, and Adolfo Chávez, ex-president of the lowland indigenous federation CIDOB, TIPNIS march president Bertha Bejarano was increasingly thrust into the spotlight. A 47-year old moxeño activist and single mother, she was joined on the 360-mile trek from the Amazonian lowlands to La Paz by six of her 10 children. 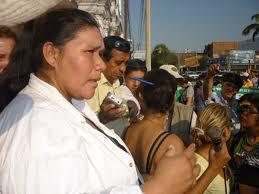 To some, Bejarano is a heroine. To others, she is a criminal.

In 2007, Bejarano was detained, along with her then-husband, in a Brazilian airport and accused of transporting 16 capsules of cocaine in her stomach. Sentenced to 6 months, she was released due to extenuating family circumstances and indigence. She has acknowledged and regretted the error of a desperate act undertaken, she says, to “gain a few pennies for my children.”

Citing this transgression, the government of President Evo Morales refused to negotiate with Bejarano in La Paz and consistently sought to discredit her, despite her repeated ratification by the TIPNIS marchers as their spokesperson.

Ironically, notes Bolivian feminist activist María Galindo, it was the insurgent cocalero movement of the 1990s—led by Morales himself—that taught Bolivians the difference between a narcotrafficker and a coca farmer, or a drug “mule.”  Bejarano, she says, is a victim of poverty, desperation, and naïveté. “What more revolutionary image could there be,” she wonders, “than a woman who was a former drug mule, now converted into a social activist with the trust of her people?” By criminalizing and dismissing Bejarano, she argues, Morales government officials are repeating the same repugnant practices followed by neoliberal ex-president Sánchez de Lozada, who refused to negotiate with cocalero and cocalera “narcotraffickers.” 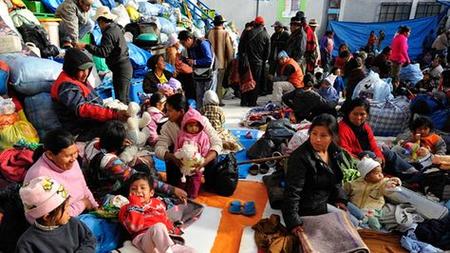 Children on the TIPNIS march. Credit: Pedro Laguna, La Razón.During both the 2011 and 2012 TIPNIS marches, the presence of children has been a contentious issue. At the culmination of the most recent march in La Paz, some 300 children were camping out with their marching families, many suffering from illness due to inadequate food and clothing, and harsh weather conditions. A 6-month old baby died from a respiratory infection, while a child on the first march was killed in an accident and several pregnant women suffered miscarriages.

These events escalated into a political firestorm, with Minister of Communications Amanda Dávila accusing the marchers of using their children as “human shields.” UNICEF also condemned the involvement of children in the protracted mobilization. The marchers blamed the government for failing to attend to their needs and prolonging their stay in La Paz by refusing to negotiate with their designated representatives.

March leaders acknowledge the political benefit of grooming a new generation of lowland indigenous activists, just as many of today’s adult marchers participated as children in the historic 1990 March for Dignity and Territory. More importantly, says María Galindo, “asking women not to bring their babies is like asking them not to participate in social struggles.” TIPNIS women bring their children to marches, she argues, just as cocalera activists did in 1990s, because no one else—including their husbands—is available to care for them.

In a related development, the Peruvian government last June threatened to arrest pregnant women who marched against the U.S.-based Newmont Company’s proposed Conga gold mine, for putting their unborn babies at risk. Ana Jara, Peru’s Minister of Women and Vulnerable Populations, accused protest organizers of exploiting the women and their fetuses to prevent police intervention. In response, protest leaders circulated a video of Nadine Heredia, Peruvian President Humala’s wife, speaking at political rally during her husband’s campaign while six months pregnant. 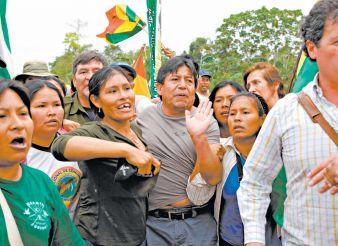 Lowland indigenous women were also in the forefront of a controversial episode during the first TIPNIS march, when Foreign Minister David Choquehuanca was forced to lead the marchers through a police barricade. The event was used to justify the violent police repression of the march the following day at Chaparina. The government labeled the incident a kidnapping and sought to press charges against six indigenous women (which were subsequently dropped for lack of substantiation).

María Galindo herself became a subject of controversy last July, when she and several indigenous leaders led a solidarity march of 500 women and children to support the TIPNIS protesters during their 2-week vigil in La Paz. The “March of the Berthas” carried posters depicting Bejarano, later affixed by participants to the shields of watchful police officers. As they allegedly sought to gain access to the Plaza Murillo (seat of government) from which the TIPNIS protesters had been barred, the marchers were tear-gassed and pepper-sprayed by police, leading some to label the event a “second Chaparina.” 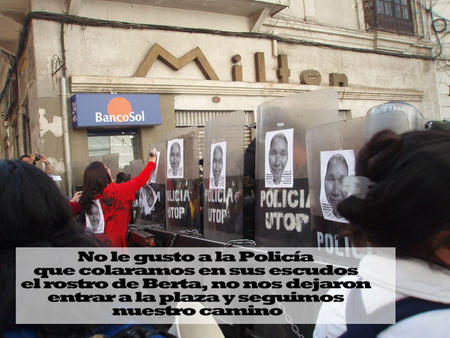 March of the Berthas. Credit: Mujeres CreandoCritics have accused Galindo of deliberately provoking violence, in a desperate attempt to mobilize public sympathy for the TIPNIS marchers in the wake of the government’s victorious pact with 45 indigenous TIPNIS authorities who agreed to support the road (none of whom were women, Galindo notes). Galindo responds that access to the Plaza Murillo is a highly symbolic right and a matter of dignity for indigenous Bolivians—especially women—after centuries of being barred from the site. (Morales frequently tells the story of how his indigenous mother could not enter the Plaza.)

From another perspective, social commentator Fabiola López Uriarte compares the militant indigenous TIPNIS women to the wives of striking police officers, who sparked the recent police revolt with a hunger strike and several building takeovers. Although women appear to be major protagonists in both these struggles, she argues, they have little power within their respective popular movements and are largely relegated to traditional roles (such as childcare and cooking on the TIPNIS march), which legitimize the patriarchal social structure. Rather than articulating their own demands, women are exploited by male leaders to advance their political agendas. 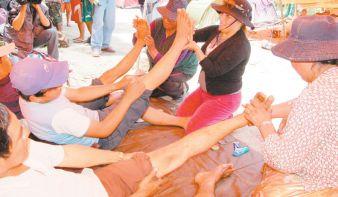 Still, at times the line between self-determination and manipulation may be difficult to determine. A case in point is an incident that occurred during the first TIPNIS march, after the brutal police repression at Chaparina, when a delegation of police officers’ wives showed up along the route of the revived march to offer sympathies and foot massages to the beleaguered indigenous protesters. Was this a courageous, independent act of solidarity by the wives? or a calculated political strategy by the police to cast themselves as victims, unfairly blamed for following a misguided government order. Or perhaps a little of both.