Honduran Charter Cities Are a Symptom of, Not a Solution to, Instability

The mainstream media have falsely portrayed the exploration of the neoliberal charter cities idea—privately owned municipalities dedicated to producing exports—as if a sovereign, democratic government were undertaking the project with the consent of the population.
Tweet
KeaneBhatt
Manufacturing Contempt
9/21/2012

On September 4, a group of international investors signed a memorandum of understanding with the government of Honduras to move forward with the development of three “charter cities”—privately owned municipalities that would be managed autonomously, complete with their own police forces, tax codes, and legal systems. These cities would develop industries for export-oriented growth, like textile manufacturing; they would also sign onto international trade agreements independently, and manage their own immigration policies. 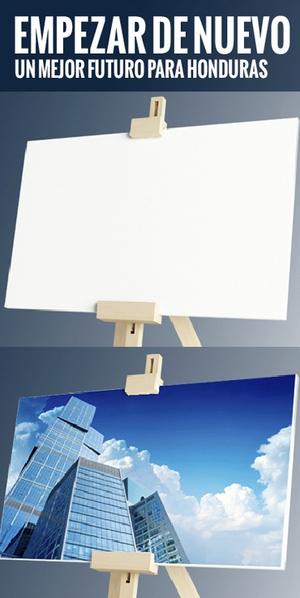 The memorandum paved the way for construction to start in six months. The MGK Group, a consortium of financiers formed specifically to advance this project, will invest $15 million for basic infrastructure on the first charter city, while the government of South Korea was reported to have given Honduras $4 million to perform a feasibility study for the initiative.

This blog has previously noted the drastic deterioration of Honduran sovereignty as a result of the 2009 overthrow of the country’s elected president, Manuel Zelaya. Under a democratic government answerable to the Honduran people, the neoliberal dream of an investor-owned city operating outside of Honduran law would have remained just that—a dream. So a coup d’etat of the left-leaning president was a precondition to implementing this messianic vision. And the sham elections that were carried out under the de facto regime have provided a semblance of legitimacy for Honduran President Porfirio Lobo, a charter city advocate, despite his administration’s striking continuity with the dictatorship that preceded it.

One journalist who took advantage of the cover afforded by the fraudulent elections is Adam Davidson, who in a May 8 article for the New York Times Magazine, wrote a gushing tribute to the “ridiculously big idea” of charter cities. Davidson’s “Who Wants to Buy Honduras?” relates the story of Octavio Sánchez, a “young aide” to Lobo, who came across a video lecture by University of Chicago-trained economist Paul Romer, the originator of the concept. After meeting with each other at the end of 2010, “the two hurriedly persuaded President Lobo to make Honduras the site of an economic experiment,” wrote Davidson. “The country quickly passed a constitutional amendment that allowed for the creation of a separately ruled Special Development Region.”

The impetus for the initiative, according to Davidson, was Lobo’s guileless concern over inequality: “he asked his aides to think big, really big. How could Honduras, the original banana republic, reform a political and economic system that kept nearly two-thirds of its people in grim poverty?” Readers of Davidson’s article would have no clue that Lobo, supposedly intent on reforming this banana republic, owed his presidency to elections acceptable only within a banana republic.

But even if Davidson ignored the violence and illegitimacy that marred Lobo’s ascent to power, his article at least acknowledged that a coup had taken place in 2009. However, Davidson didn’t bother reconciling his account with that of his interviewee, Sánchez, who is Lobo’s chief of staff. Currently playing a key role in the development of charter cities, Sánchez published an op-ed in The Christian Science Monitor days after Zelaya’s 2009 overthrow, urging readers not to “believe the coup myth,” as it was “nonsense.” After the military kidnapped Zelaya at gunpoint in the middle of the night, Sánchez applauded the event as “nothing short of the triumph of the rule of law.” 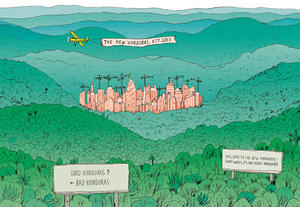 Davidson also contended that the Lobo administration wanted to “undo the entrenched power networks” of a country “dominated by a handful of wealthy families” and “American conglomerates” like Dole and Chiquita. This is a surprising claim, considering that Lobo—a wealthy rancher and a beneficiary of the elite-backed coup—was recently feted in Washington, D.C., by powerful Republicans at a gala underwritten by some of the largest corporations in the United States. And by framing charter cities as Honduras’s remedy to investors’ fears of “corrupt political cronyism or the occasional coup,” Davidson flipped the facts on their head—Lobo’s government, staffed by a coup-backing charter-city evangelist, has a brutal track record of criminality and corruption.

The mainstream media have invariably portrayed the exploration of charter cities as if a sovereign, democratic government were undertaking the project with the consent of the population. Nothing else has worked for Honduras’s myriad afflictions, according to this misleading depiction, and charter cities—while quixotic—might generate some stability in the wake of a disruptive putsch.

The recent signing of the memorandum of agreement demonstrates the media’s default usage of this dishonest framing. A September 5 Associated Press report by Alberto Arce took the liberty of divining the motives behind the push for charter cities: “The project’s aim is to strengthen Honduras’ weak government and failing infrastructure, overwhelmed by corruption, drug-related crime and lingering political instability after a 2009 coup.”

An unanswered question in Arce’s reporting is how the project will strengthen the “weak government” by ceding enormous swaths of territory to a panel of “international leaders” that will appoint governors to administer the cities “in conjunction with the developers.” And like Davidson, Arce parrots the idea that charter cities are a way for the Lobo administration to resolve post-coup instability (even if Sánchez publicly denied the coup’s existence).

The United Kingdom’s left-leaning Independent and Guardian newspapers, like the New York Times Magazine and the AP, excluded the issue of Lobo’s illegitimacy from their coverage of the memorandum of agreement earlier this month. In addition, The Independent’s article, “Can Private Cities Save a Nation with World’s Worst Murder Rate?,” referred to crime in Honduras caused by “drug cartels and savage street gangs,” but did not provide information on credible reports that Honduran government forces are implicated in recurrent murders and violence.

The Guardian, for its part, repeated the deceptive account of charter cities being conceived “partly to make Honduras more attractive to foreign investors who fear crime…and political instability (Lobo was elected following a coup d'etat in 2009).” The newspaper even lent its concluding paragraph to Michael Strong, the head of the MGK Group, who provided the piece’s final word: “The main goal of our project is to create the basis for a safe and prosperous future for Hondurans.” Profits, the reader is left to gather, must be a more distant concern.

A year prior to being hailed by Foreign Policy magazine as one of the “Top 100 Global Thinkers of 2010” for “developing the world’s quickest shortcut to economic development,” Romer participated in a Q&A at Freakonomics.com, a website co-created by University of Chicago economist Steven Levitt. In that 2009 interview, Romer inadvertently highlighted the necessity of a coup d’etat to realize his utopian goal of a privatized city. Romer related the skepticism of his colleagues, who “say that for political reasons, it will never happen. They tell me that you can’t change politics; you can’t overcome nationalism.”

The obstacles of politics and nationalism would melt away just one month later with the U.S.-backed “election” of Lobo. The ever-resourceful Romer would not let concerns for democracy get in the way of winning over the coup government’s successor with his idea the following year. Nor would such concerns prevent him from presenting at the U.S.-endorsed 2011 conference, “Honduras is Open for Business,” whose participants included the richest man in the world, Carlos Slim. “Many times,” concluded Romer in 2009, “all that holds us back is a failure of imagination.”

What hasn’t held them back? A probing, diligent press corps.

Keane Bhatt is an activist in Washington, D.C. He has worked in the United States and Latin America on a variety of campaigns related to community development and social justice. His analyses and opinions have appeared in a range of outlets, including NPR The Nation, The St. Petersburg Times and CNN En Español. He is the author of the NACLA blog “Manufacturing Contempt,” which critically analyzes the U.S. press and its portrayal of the hemisphere. Follow his blog on Twitter @KeaneBhatt