2013: A Brighter Year Ahead for the Caribbean?

In 2012, the Caribbean was the site of many positive developments—but overall the region as a whole is desperately trying to keep its head above water. While last year marked 50 years since the end of formal British colonialism in both Jamaica and Trinidad, it also highlighted that new and perhaps more powerful structures of control have arisen in the region such as the International Monetary Fund, the World Trade Organization, and the international drug trade.
Tweet
Kevin Edmonds 1/10/2013 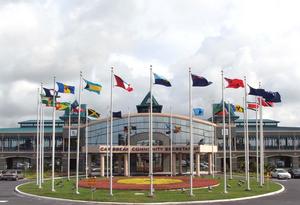 In 2012, the Caribbean was the site of many positive developments—but overall the region as a whole is desperately trying to keep its head above water. An example of this could be seen in both Jamaica and Trinidad’s 50th anniversary of political independence. While last year marked half a century since the end of formal British colonialism, it also highlighted that new and perhaps more powerful structures of control have arisen in the region such as the International Monetary Fund, the World Trade Organization and the international drug trade. The continued advance of all three of these influences has been relatively unimpeded in the politically fractured Caribbean of today. What one can only hope is that from the lack of progress following prescriptions handed down from Washington, Geneva and Brussels, will lead to a reorientation towards discussing new alternatives for the region. The ugly reality of austerity has rolled back much of the region’s social progress in healthcare and education—and we are witnessing an unparalleled spike of inequality, poverty, and crime. The majority of the spending for such services now is predominately debt driven and as such are unsustainable.

Jamaica has come to symbolize how problematic a relationship with the IMF can become. Since the late 1970’s Jamaica has been stuck on a treadmill of debt, running at full speed, engaging in continuous borrowing, and repaying with massive amounts of interest while never getting ahead. In the 35 years the IMF has been in Jamaica, the country has devalued its currency numerous times, liberalized its tariffs, lowered taxes for corporations, created export-processing zones, slashed social spending, and privatized state enterprises. This has all resulted in higher levels of debt, less social services, little to no economic growth, and the collapse of Jamaica’s productive economy.

While this may not be news to many in the region, an article in the Chicago Tribune recently stated that Jamaica’s ongoing debt crisis is in fact worse than that of Greece—and also that Jamaica has more debt in relation to the size of its economy than any other country. Jamaica is currently in the midst of deciding whether or not to negotiate a further round of payment restructuring. Instead of flying advisors from Washington to Kingston to provide advice on how to handle the crisis, perhaps the PNP government should be looking south towards Buenos Aries for ideas on how to deal with such unsustainable levels of debt.

The Westminster institutions of government inherited from colonialism have also showed that it is due for an upgrade. The two party system of much of the English speaking Caribbean has left a legacy of partisan infighting, and in most cases the population has the choice between two flavors of neoliberal policy orientation. Lloyd Best rightly challenged the wholesale acceptance of British cultural and political institutions in a region so diverse and different in regards to size, population, resources, history, and power relations. There is no real third option to challenge the ineffectiveness of the traditional parties and break beyond the isolationist politics of underdeveloped micro-states and think in terms of a regional political alternative. While this will not happen overnight, there is a serious need for democratic renewal in the region. As Tennyson Joseph of the University of the West Indies has written, there is a serious need for a second independence revolution to take place if the region is to develop meaningful solutions to its unique problems.

The year 2012 also saw the publication of the first Human Development Report focused specifically on the Caribbean.  The report was heavily focused on how crime has impacted human development in the region. Lead writer Helen Clark argued along the lines of what has more or less become common sense stating that “This report stresses the need to rethink our approaches to tackling crime and violence and providing security on the ground. We need to follow approaches that are centered on citizen security and address the causes of this recent increase in violent crime, including social, economic, and political exclusion.”

The problem is, given the situation whereby most governments are limited economically—how can such resources materialize? Additionally, the problem of crime in the Caribbean cannot be solved simply by throwing more money towards security forces and the police—this is simply a way to try to contain it. The sharp increase of crime across the Caribbean has coincided with the implementation of trade liberalization and an erosion of basic social welfare programs. In a society where opportunity is a scarce commodity, the lure of quick cash in the drug trade is not a question of morality—it is a matter of survival for most. According to many domestic police reports, this can be seen by the increase of marijuana plantations by former banana farmers in their late 50s and early 60s in both St. Lucia and St. Vincent, where they have gone so far as establishing a marijuana growers association in the latter.

The orientation of the region has led to a fracturing of both the domestic and regional economies. What is proposed is not an easy task, and it will take a collective effort. What Caribbean leaders need to do is establish a series of plans to tackle to most serious problems facing the region. In regards to food security, the Caribbean is one of the most fertile regions on the planet but is vastly underutilized when it comes to the production of locally consumed food. While CARICOM countries enjoy duty free access to each other’s markets, we have only begun to see the implementation of a partnership which will see Trinidad fund a food security initiative which will hopefully turn Guyana into the breadbasket of the region. It should not stop there however, as Belize, Haiti, Suriname and Jamaica all have the potential to significantly boost the production of local agricultural production. Such initiatives will not only reduce the skyrocketing food import bills, it will also act as a sponge for the large number of unemployed and underemployed in the region.

While tourism is now the largest contributor of income in the Caribbean, an effort must be made to make the industry more sustainable in addition to mandating that it form much needed links to other industries such as agriculture. A 2011 World Bank report on Jamaica revealed that as much as 80% of tourism earnings do not stay in the Caribbean region, one of the highest "leakage" rates in the world. According to Victor Bulmer-Thomas of London University, "In all-inclusive Caribbean hotels it is common for only 20% of revenue to be returned to the local economy. In the case of cruise ships it will be much less, probably no more than 5%." In addition, the majority of the food which is served in the hotels comes straight out of the container port from Miami. It is not unusual to see bowls of apples and grapes sit in Caribbean hotel restaurants while fruit vendors selling local fruit like mangoes or papayas struggle to get by. As a result, the income derived from these food imports are also exported outside the region.

While the region is in no way fighting from a position of strength, the weakness of the United States should be taken as an opportunity to reorient the Caribbean towards meeting domestic, rather than international needs. While the population of the region certainly knows that change must occur—and soon—how much further does the region need to fall for politicians to change their course of action? Hopefully 2013 will be an unlucky year for those who benefit from and are determined to keep the Caribbean locked into outdated and inappropriate policies which do nothing to improve the condition of the majority of the people.