Puerto Rico has a complicated and oftentimes contradictory history regarding gender and sexuality. In the second posting of NACLA-Global Voices' new series, Angel Carrión lays out an initial framework for understanding the LGBT movement in Puerto Rico today. 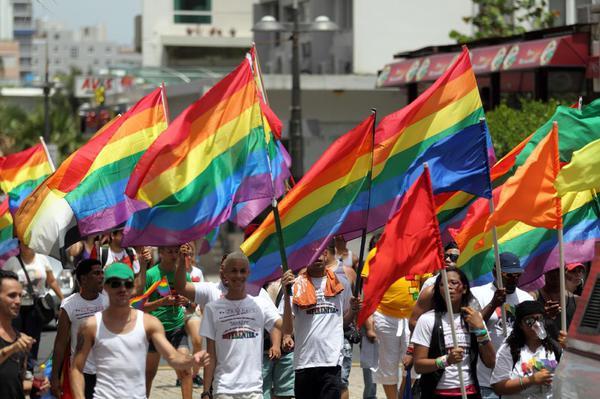 Puerto Rico has a complicated and oftentimes contradictory history regarding gender and sexuality. Even though recent initiatives—such as the passing of a bill that prohibits denying someone a job based on gender or sexual orientation, and the inclusion of same sex couples under the protection of the Law Against Domestic Violence—are definitely steps in the right direction, much work still needs to be done to ensure equality.

The anti-discrimination bill mentioned above was originally meant to offer broad protection against discrimination not only in the workplace, but also in applying for and receiving government services. While many have criticized the watered-down version of the anti-discrimination bill that was ultimately made into law, it is still very significant, considering that it was only in 2005 that same-sex relations between consenting adults were decriminalized due to the U.S. Supreme Court's ruling in 2003 that all state and territorial statutes penalizing same-sex relations are unconstitutional, thus forcing a revision of the Penal Code. Puerto Rico's own Supreme Court had ruled in 2002 that the island's ban on "sodomy" was not unconstitutional.

Earlier this year, however, this same Supreme Court ruled that adoption by same-sex couples is unconstitutional. Ángeles Acosta and Carmen Milagros Vélez, two Puerto Rican mothers who have raised their daughter together since her birth, have been struggling for years to have their family legally recognized. The only way for Ángeles Acosta to adopt her daughter is for Carmen Milagros Vélez, the child's biological mother, to give up all of her rights as a mother to her partner.

Acosta and Vélez have now exhausted every possible legal course of action and can only hope that Senate Bill 437, which eliminates gender distinction as an obstacle for adoption, is signed into law. Theirs is but one of many more Puerto Rican families in similar situations.

These examples are symptomatic of a strong institutionalized reluctance to recognize sexual diversity. This stems partly from politicians' fear of a very vocal conservative sector, and partly from politicians like the previous President of the Senate, Thomas Rivera Schatz, who has repeatedly expressed unconcealed bigotry towards the LGBT community.

Bisexuals are one of the least-mentioned groups whenever a discussion on LGBT issues arises, rendering them practically invisible. This is, in part, due to the widespread misunderstanding about bisexuality in general.

In order to help remedy this, a Facebook page called B es de Bisexual (B is for Bisexual) was created last year. The page aims to educate people about bisexuality and to serve as a way to reach out to other bisexuals and share resources, information, stories, and ideas. Even though it still has barely over 100 followers, it is one of the few resources on the web that focuses specifically on the bisexual community of Puerto Rico.

While it its true that some progress has been made towards fostering acceptance of gays and lesbians, the same cannot be said yet of attitudes towards transexual and transgender persons. In general, trans people endure much more discrimination and marginalization than gays and lesbians do.

Trans people are pressured to conform to societal expectations of gender and sexuality; those who are deemed too visible will invariably be ridiculed and, in the worst cases, exposed to real danger of physical harm. Many have been victims of hate crimes.

Efforts are being made, however, to create change. Last year, the documentary film "La aguja" ("The Needle"), directed by Carmen Oquendo-Villar and José Correa Vigier, was released at the Puerto Rico Queer Filmfest to positive reviews. It has enjoyed numerous screenings, both locally and in the United States, most recently in New York’s Venezuelan Art Festival in November of this year.

The film gives viewers a glimpse into the everyday life of José Quiñones, a trans artist who gives inexpensive collagen treatments and advice to all who come to see him in the improvised cosmetic clinic that he runs out of his modest home. See here for a teaser trailer of the film.

It is in the realm of culture and citizen media, however, where the strongest voices of support for the LGBT community can be found. The Puerto Rico Queer Filmfest, which is celebrating its fifth year this month, is more than just a film festival; it seeks to educate the general public about gender and sexual diversity and forge alliances with other LGBT organizations.

The Facebook page LGBT Puerto Rico is dedicated to creating awareness about LGBT issues and promoting rallies, festivals, and other activities related to LGBT advocacy.

These are only brief examples of the ongoing struggle for visibility and recognition of LGBT rights in Puerto Rico. Many more projects and online resources meant to help the LGBT community and to educate the general public will be explored in future posts of this series.

Angel Carrión is a musician and blogger from Caguas, Puerto Rico. He holds a Bachelor's Degree in Music from the Puerto Rico Conservatory of Music and is currently working on a Master's Degree in the History of Puerto Rico and the Caribbean at the Centro de Estudios Avanzados de Puerto Rico y el Caribe. He is passionate about music, books, and the right to free speech. Ángel blogs at dialogolibre.blogspot.com.