Last month, Bolivians marked the tenth anniversary of "Black October," a watershed moment in a popular uprising that culminated with the election of Evo Morales. Today, both Morales and popular sectors view the legacy of Black October through the lens of their own political agendas.
Tweet
Emily Achtenberg
Rebel Currents
11/8/2013

Last month, Bolivians marked the tenth anniversary of “Black October,” when the government of then-president Gonzalo Sánchez de Lozada (“Goni”) violently repressed indigenous citizens who were protesting his plan to export cheap natural gas to the United States through Chilean ports.  The episode sparked a popular uprising known as the “Gas War” that led to Goni’s ouster, followed by a chain of events culminating with the election of Evo Morales in 2005 as Bolivia’s first indigenous president. 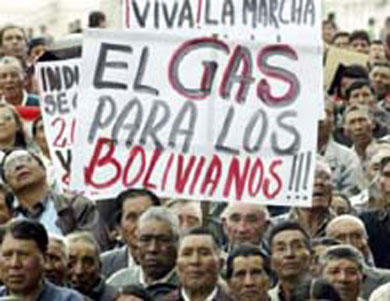 Protest during the Gas War.

Ten years later, the anniversary of this watershed moment in Bolivian history has spawned its own controversies, as both Morales and popular sectors view the legacy of Black October through the lens of their own political agendas.

On October 17—the day of Goni’s official resignation—the government sponsored a massive rally and commemoration of Black October in El Alto, the indigenous city overlooking La Paz that was the epicenter of the 2003 conflict. Morales proclaimed a “Day of National Dignity.” It was a day of mourning, he said—paying tribute to the 71 dead and 400 wounded heroes of the Gas War—but also a day of hope, marking the end of Bolivia’s neoliberal era and the start of a new revolutionary cycle.

Looking back on the last ten years, Morales declared that his government has largely fulfilled the “October Agenda,” the demands of the campesino and indigenous movements that brought him to power. These include the adoption of a new Constitution to refound the Bolivian state, and the nationalization of gas and other strategic resources. Major steps have also been taken towards the industrialization of gas, such as the liquids separation plant in Santa Cruz.

Today’s task, said Morales, is for the government “to ensure that the right never again returns to power.” Leaders of pro-government campesino organizations invoked the legacy of Black October to urge popular sectors to unite behind Morales in the 2014 presidential campaign, in which he is seeking a third term. 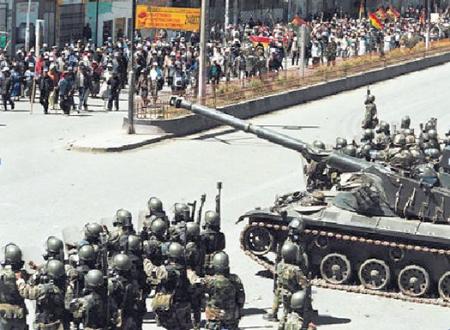 El Alto, October 2003. Credit: Gonzalo Sanjinés Portugal.Responding to another demand of the October Agenda, the Morales government last month revived its attempts to extradite Goni and two ex-ministers from the United States. The first extradition request, filed in 2008, was rejected by the U.S. State Department in 2012. The 3 subjects are among 17 former military and government officials charged with serious crimes—including homicide, torture, and “genocide in the form of a bloody massacre”—in conjunction with the violent events of Black October, which were carried out under a declaration of martial law. Of the 17, 7 have stood trial in Bolivia, receiving prison sentences of 3-15 years in a landmark 2011 case. The remaining 10 who fled into exile (including Goni) cannot be held legally accountable in Bolivia unless the government succeeds in extraditing them.

In its second extradition request, which Morales says will be filed by the end of the year, the government has eliminated some of the charges that lack equivalency in U.S. law—a major reason given by the United States for denying the original petition. Still, the obstacles to success are formidable—including Goni’s long-standing dual citizenship, advanced age (83), and strong connections in U.S. political and business circles. (Goni’s close ties with Democratic political operatives James Carville, Stan Greenberg, and Bob Shrum, who helped him win Bolivia's 2002 presidential election despite his deeply unpopular economic policies, are detailed in the excellent documentary Our Brand Is Crisis.)

Conservative critics of Morales charge that the extradition quest is a fruitless, but costly, political charade, revving up only during pre-election years. But groups like the association representing family members, victims, and survivors of the Gas War want Morales to push even harder, bringing pressure to bear on the United States through international tribunals and political channels. 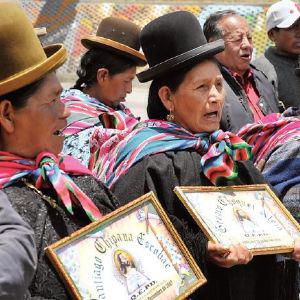 For the families, who shunned the Day of National Dignity in favor of their own march to protest “10 Years of Impunity,” the legacy of Black October is symbolized by the failed promises of the Morales government. Beyond tributes, they say, what’s needed is true compensation for the families in the form of pensions, health care, and jobs. The families have also filed lawsuits in 3 Bolivian courts, demanding that the assets of ex-ministers and military personnel convicted or accused of Black October crimes—in the form of real estate, land, cars, stocks, and bank accounts—should be auctioned off and paid to them as reparations.

Another group that has exploited the anniversary of Black October to its political advantage is FEJUVE-El Alto, the federation of neighborhood organizations (now numbering more than 700) that was the chief protagonist of the Gas War.  While El Alto is one of the fastest growing cities in Latin America, whose population (now 1.1 million) has virtually doubled since 2003, FEJUVE leaders say conditions haven’t improved much since that time. Sixty percent of the population still lacks sewer service, and 10% has no potable water.

While their struggles in 2003 benefited all of Bolivia, Alteños claim they have not received a fair share of the resulting benefits. According to FEJUVE ex-president Mauricio Cori, there has been a “neglect of this City that has been the vanguard of [Bolivia’s] process of change.” 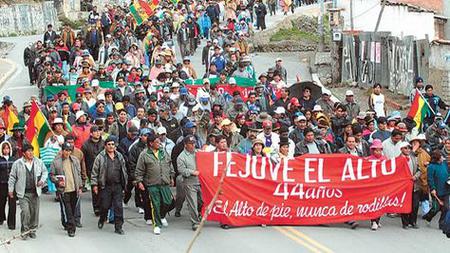 Credit: La Rázon.To commemorate Black October, FEJUVE launched a 24-hour civic strike and announced that its members would boycott the Day of National Dignity unless the government addressed its demands. These include specific infrastructure and transportation projects, a compensatory fund, and the industrialization of gas in El Alto to provide stable jobs for workers now consigned to the rapidly expanding informal sector. FEJUVE also wants El Alto to have a direct share of national hydrocarbons revenues.  (Currently these revenues are channeled primarily to the nine departments by a statutory formula that yields anomalous results. For example, Tarija—which produces 60% of Bolivia’s natural gas but has only 5% of its population—gets 30% of all hydrocarbons revenues.)

On the Day of National Dignity, with FEJUVE leaders and members in attendance, Morales reminded Alteños that they have received 50% of the country’s new domestic gas connections and announced a $70 million loan for construction of a new dam benefiting El Alto’s dwindling water supply. He later committed $1 billion for infrastructure, transportation, water, sewer, and gas network improvements, and promised a new computer assembly plant.

For some leftist critics of Morales, the anniversary of Black October has provided an occasion to reflect on and denounce the government’s perceived structural failures. “Ten years after the Gas War,” editorializes the bulletin La Protesta, “the October Agenda is still pending.” In this view, there has been no true nationalization of gas, with transnational corporations still calling the shots (as evidenced by the Gasolinazo). According to La Protesta, the TIPNIS struggle and subsequent conflicts with militant mineworkers have revealed the government’s anti-indigenous, anti-union proclivities, while new alliances with agrobusiness have betrayed even its core peasant constituency. La Protesta calls for sectors to re-engage in the popular struggle through the new Workers Party that will likely contest Morales in the upcoming election.

Still another perspective is offered by the daily Página Siete, which suggests that the roots of the Gas War can be found in the 1990 march of lowland indigenous people for dignity, land, and territory—an event that first put the demand for a new constitutional order on the national agenda. In this view, the anniversary of Black October offers an opportunity for campesino- and indigenous-identified movements to transcend their differences, highlighted by the TIPNIS conflict. National dignity will be achieved, the daily suggests, not only when those responsible for Black October are brought to justice, but when of the rights of both highland and lowland indigenous groups are equally recognized, along with their common aspirations for a better life.