Imperialist Musical Chairs: the U.S. and Brazil in Morales’s Bolivia

Evo Morales’s 2005 election brought an end to a long period of U.S.-Bolivia relations. Since at least 1952, the United States held Bolivia under its sway as a client state. Although it is important to acknowledge Morales’s push-back against U.S. imperialism, other forms of imperialism loom large.
Tweet
mpa291
NACLA-CLACS Student Blog
12/24/2013 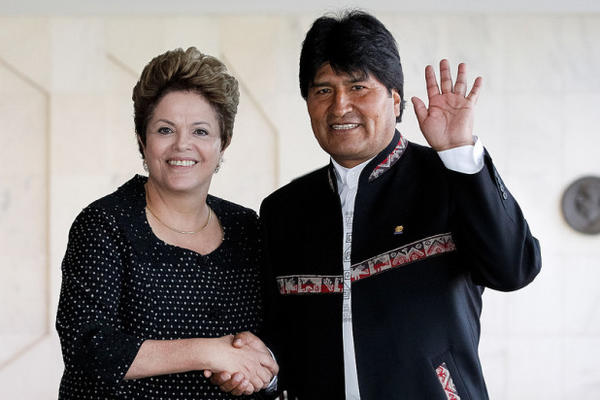 Evo Morales’s 2005 election brought an end to a long period of U.S.-Bolivia relations. Since at least 1952, the United States held Bolivia under its sway as a client state. The end of U.S. imperialism through an insidious client-patron relationship that traded large sums of U.S. money for Bolivian adherence to capitalist development and democratic principles was a momentous occasion. Although it is important to acknowledge Morales’s push-back against U.S. imperialism, other forms of imperialism not only loom large, but also happen to coincide with Morales’s interests. No longer is imperialism a cultural and political project shepherded by one nation-state that becomes the patron for client states; to the contrary, it is becoming a reflection of the messiness and instability of our transnational and globalized era. A look at the TIPNIS road controversy in the heart of Bolivia, a country always on the receiving end of imperialist projects, illustrates the emergence of one particular form of new imperialism: Brazilian subimperialism.

In 2011, 700 Amazonian peoples began an 800 km trek from the TIPNIS to the Bolivian capital La Paz. The TIPNIS is a national park and indigenous territory home to three indigenous nations—moxeño, yuracaré, and tsimané. The indigenous marchers protested the government’s plan to construct a road across their territory. Evo Morales, Bolivia’s first indigenous president, in the face of mounting opposition to the road, quipped that it would be built regardless—“quieran o no quieran.” Morales labeled the marchers “pawns” of foreign NGOs and the United States whose goal was to stunt Bolivia’s economic growth by blocking the road’s construction.

Instead of taking these accusations lying down, road opponents turned the tables on Morales, claiming that Morales, and not them, was the pawn of foreign interests. Road opponents used three key facts to illustrate this acquiescence: 1) the road was financed by another country’s development bank, 2) the road was part of this other country’s long-term regional infrastructure plans, and 3) major corporations in the other country were preparing to access the TIPNIS’ natural resources through the road. What was this mysterious other country? For road opponents, the imperial menace was no longer the United States, as Morales claimed, but rather the Brazilian behemoth next door.

From 1952-2005, U.S.-Bolivia relations have been structured in terms of three discourses emanating from Washington DC: the War on Communism, the War on Drugs, and neoliberalism. Bolivian political elites, eager to gain the favor of U.S. officials in exchange for aid, trade, and support, became clients of a dynamic that the Argentine author Martín Sivak characterizes as “Americanized” U.S.-Bolivia relations. With Morales now in power, this is no longer the case; U.S.-Bolivia relations have been “Bolivianized.” Having expelled the U.S. Ambassador along with the DEA and USAID, ignored the neoliberal prescriptions of the Washington Consensus, and denounced the United States as a threat to democracy and stability in the world, Morales is turning U.S.-Bolivia relations on its head. No longer does Washington call the shots with Bolivian political elites scrambling to implement or act on the basis of U.S. orders. Instead, Bolivia is asserting itself alongside other progressive governments. Bolivia is finally saying “no” to what it perceives as the U.S. views of the region—a place the United States derisively refers to as its “backyard.” The Morales government has characterized the U.S.’ diminished influence in Bolivia in very positive terms: greater state control over the economy, “social control” of coca production over eradication measures, and sovereignty in forging an independent foreign policy. For Morales, the United States is the antithesis of his agenda: “we are anti-imperialist, anti-capitalist and anti-neoliberals” Morales declared this year in the same speech in which he threatened to definitively expel the U.S. Embassy operations (and not only its Ambassador).

However, the dependence of Bolivia political elites on client-patron relations, such as the one the United States maintained for many years with Bolivia, is something that continues still with the Morales government. Although Bolivia’s weak international presence makes it subject to global economic and political dynamics far from its control, Bolivia’s political elites have historically leveraged their position as clients vis-à-vis larger world powers, or patrons, to gain support at home and perpetuate themselves in power. This is still the case with Morales, where Bolivia remains the client state of its next-door Brazilian patron.

Curiously, the transition from U.S. to Brazilian influence in Bolivia is in no way fortuitous. Rather this transition is an example of how Brazil’s regional power and U.S. world power actually work together in a situation termed “subimperialism,” as the scholar Ruy Mauro Marini described decades ago. Subimperialism was coined by Marini to explain the contradiction between both his nation’s regional power and its continued global dependency. Subimperialism supposes the existence of a “center from which imperialist expansion [would] radiate,” meaning that Brazil is nothing more than a clog, or a lubricant as some describe it, of a broader world system of capitalism. The tenets of subimperialism argue that regional powers such as Brazil—and South Africa for the Africa continent—owe their recent development to a continued dependency on regional imperialist forces and practices.

If anything, Brazilian subimperialism has adapted all too well to the new geographies of political power in neighboring countries such as Bolivia. Even with leadership characterized by anti-imperialist such as Morales, Bolivia does manage to fit into subimperialist calculations. Emphasizing strong South-South relations, regionalism, and integration of infrastructure and communications, Brazil’s subimperialist maneuvers are cloaked in agreeable terms for leaders like Morales eager to begin a new chapter of autonomous development free from U.S. control.

For instance, take the Initiative for Integration of the Regional Infrastructure of South America (IIRSA) that Brazil has proposed. IIRSA is a series of long-term infrastructure projects that include the contentious TIPNIS road across Bolivia. Morales lauded IIRSA as a way “to seek a regional integration beneficial to our people,” yet IIRSA exemplifies the link between Brazilian government backing/finance and private corporations. In the TIPNIS case alone, Brazilian government support along with Brazilian Development Bank financing and the use of a Brazilian construction company OAS reveals the intricate webs of subimperialist development. Add to this mix the interest of Petrobras and other Brazilian corporations to extract the TIPNIS’s natural resources for export overseas, and it’s easy to see the subimperialist roots of the issue.

Still, with Morales bewitched by Bolivia’s strong economic performance—resulting almost exclusively from the high price of the natural resources it exports—and convinced, at least in his rhetoric, of the benefits of regional integration, Brazilian subimperialism stands unchallenged. Political elites in other countries, notably Correa in Ecuador, also capitulate to Brazilian interest, but always in the language of development and sovereignty to stake out national policies without U.S. interference. Removing the specter of U.S. imperialism has not done away with imperialism, but rather heightened other more subtle forms of imperialism—forms that must be recognized and confronted if Bolivia’s proceso de cambio is to be a long-term project rather than a quixotic anomaly.

Michael Abbott is a masters student in NYU's Center for Latin American and Caribbean Studies.