The Petro Purge and Political Cleansing in Colombia

Bogotá has been rocked by indignados protesting the past two weeks due to a possibly unconstitutional removal of the city's Mayor Gustavo Petro. The Procurador Alejandro Ordoñez was behind the move, banning him from holding public office for 15 years. But the institutional force behind Ordoñez, and the consequences the removal will have in the new year, remain to be seen.
Tweet
Luke Finn
Red Hot Burning Peace
12/24/2013

Who needs sicarios when there’s a man like Ordoñez about? 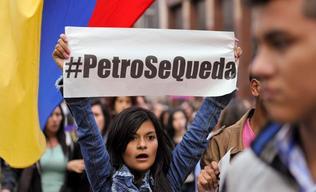 The pretext for the hit on Petro was what the weekly magazine Semana calls “the garbage catastrophe.” In December 2012, Petro attempted to overhaul the garbage collection system in Bogotá, firing private contractors and creating a single public operator for waste collection. The hasty and poorly managed move ended up with the importation and rental of second-hand waste collection trucks from the United States, with disastrous results: the trucks were not up to standard, leaving refuse piled around the city. Furthermore, Petro decreed that dump trucks could be used to collect the rubbish—recourse that is explicitly forbidden by Colombian law—and an operator on one of these trucks died attempting to do his job.

The Procurador has overarching powers to investigate and punish public servants for not only corruption and party-political activities, but also poor management and dereliction of duty—including officials elected by popular vote. While Petro’s waste management crisis may have constituted poor management, the sanctions meted out by Ordoñez are disproportionate to the crime. Ordoñez had a number of other options, including suspending Petro for a year pending investigation, or issuing a public admonishment. Instead, Ordoñez opted to sign a political death sentence.

Ordoñez is ultra-right wing, a member of Colombia’s Conservative Party, devoutly Catholic, opposed to same-sex marriages, and allied to ex-President Uribe’s hard-right Centro Democrático (though Ordoñez was voted for in Congress by both Petro and President Santos in his 2012 election). Petro, in contrast, is a former member of the M-19 guerrilla group that demobilized in 1990, strong in his support for LGBTI rights, and vocal about the malign influence of paramilitaries in Colombian politics.

Ordoñez has in the past fired and barred right-wing politicians, most notably Congressional Representatives Eleonora Pineda and Rocío Arias, for their links with paramilitaries. He has also in the past condemned mayors of major cities, most notably Alonso Salazar, former mayor of Medellin. In the case of Salazar, Ordoñez fired and barred him from office for 12 years for interfering in politics when he publicized clear evidence that one of his potential successors was in league with paramilitary groups (although some believe this move was motivated by Salazar's support for a Woman's Clinic that conservatives claimed would become an abortion clinic).

Even with a controversial past, Ordoñez has overstepped the mark more than ever imagined in his removal of Petro. The move sends a clear signal to the Colombian people, as the mayor of Bogotá is in theory the second-most powerful politian in Colombia following the president. It is now clearer than ever that Ordoñez is pursuing a political cleansing of those he disagrees with, namely the populist left.

The issue has already spurred a further polarization within Bogotá politics. With regards to the Peace Process, FARC leader Pablo Catatumbo commented that the issues raised “serious doubts, and increased mistrust” at the negotiations—unsurprising, given that one of the points of discussion is the ability of FARC leaders to enter formal politics. If an ex-guerrilla like Petro can be arbitrarily and summarily dismissed for what appear to be nakedly partisan reasons, the FARC has little reason to believe negotiation agreements are gaurantees.

What can we surmise from Ordoñez's actions? A fanatical desire on the Procurador's part to apply the letter of the law to its fullest degree, regardless of any sense of proportion? A political move to disrupt the peace process and weaken opposition to the Uribistas campaign prior to 2014?   It is all these things. As highlighted earlier, the extent and lack of oversight of the Procurador's powers, combined with the reality of Colombia’s municipal politics, put essentially all Colombian public officials at risk of political banishment. Even discounting wide-spread corruption at local levels, occasional mismanagement and political maneuvering are regular occurrences and unfortunate facts of life in Colombia. Subjecting any and all public servants to a politically motivated Sword of Damocles is extremely damaging to political plurality in Colombia, and it raises serious questions regarding institutional commitment to constitutional democracy—a situation not incomparable to recent experiences in Paraguay and Honduras.

Furthermore, the move, if Petro loses his appeal, sets up the first six months of 2014 to be a political war on all fronts. Not only will there be the presidential elections in May, but also the congressional elections in March—more crucial than ever, as it will be Congress that ratifies the agreements, if any, that come out of the Peace Process—and now an election for the mayor of Bogotá. Each of these arenas will be fiercely contested between Santos’s center-right and the Uribista/Centro Democrático’s far right, the latter of whom are bitterly opposed to any negotiations with the FARC. Francisco Santos, cousin of the President and star in the Centro Democrático, is expected to compete in the mayoral contest.

The intractable differences that will define these six months have clear consequences for Colombia’s chance at peace. Ordoñez's purge highlights not only the institutional crises in municipal administration in Colombia, but also the growing gulf in Colombia's national politics, and, perhaps most sadly of all, the precarity of the Peace Process.