Raul Burbano is the Program Director for Common Frontiers Canada, a multi-sectoral working group based in Toronto that organizes research, educational campaigns, and political action on issues related to hemispheric economic, social, and climate justice. He shares his thoughts and experiences after returning from Honduras as an official member of Canada's electoral observer delegation.
Tweet
Kevin Edmonds 12/4/2013 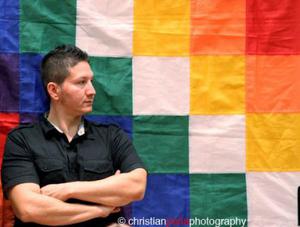 Upon his return to Toronto, I had the opportunity to catch up with Raul Burbano, Program Director of Common Frontiers. Common Frontiers is a multi-sectoral working group based in Toronto that organizes research, educational campaigns, and political action on issues related to hemispheric economic, social, and climate justice. Raul reported from Honduras during the election and was gracious enough to take the time to talk about his experiences and provide some analysis of the current electoral crisis.

Kevin Edmonds: When you were on the ground in the days before the election, what was the general attitude of the public? Were they hopeful or did they see this coming?

Raul Burbano: We were on the ground from the 17-27th in Tegucigalpa, San Pedro Sula, Choloma, El Triunfo de la Cruz, Arizona, and Valle de Siria. The mood was contradictory because in general people had high expectations for change, but at the same time expressed a lack of confidence in the process and in fair and transparent elections. As the elections drew closer, this became more apparent with people like cab drivers, vendors, and LIBRE activists sharing their personal stories about the irregularities within the voter registry. Stories of voters showing to be dead on the registry list and dead people registered to vote, names associated with pictures of other people, all disqualifying them from voting…this was the first sign that many pointed to as fraud.

KE: The Canadian delegation was the first to report and denounce the elections. What were some of the irregularities that caused your group to make this decision?

RB: Our delegation was part of the larger group, the Honduran Solidarity Network (HSN), and together we were the largest delegation of observers (190) spread across the country in 10 districts.

The atmosphere of fear and violence leading up to the elections must also be taken into account when considering fair elections. There were numerous reports of pre-election intimidation, violence, and murder of opposition candidates with as many as 18 from the LIBRE party murdered just 6 months prior to the elections. Two days prior to the elections masked men with guns, presumed to be military police, surrounded the LIBRE party headquarters in Tegucigalpa. Members of our delegation were present and observed the fear and anger of LIBRE sympathizers. The day before the elections Maria Amparo Pineda, LIBRE party’s Cantarranas polling station president, and other member, Julio Ramón Araujo Maradiaga, were assassinated after leaving a polling station training.

Speaking to our own experience on the ground, the scare tactics started from when we arrived in Honduras. There was a strong atmosphere of intimidation on the part of the government toward independent observers. After our pre-election press conference, armed immigration officials raided the hotels where our northern delegation was staying, asking for their passports and documentation, threatening to expel observers. This was a clear attempt to intimidate our group.

At numerous voting centers there was no “custodio”—the person in charge of the voting center. This means that in some cases the military police had to take responsibility for all the material. In the municipality of Ojojona, rather than being able to speak to a “custodio,” we were greeted by a TSE official who identified himself as being in charge of the voting centre, despite the fact that was only a “vocale”—a support person at a voting table. He spoke to us in English, describing himself as a U.S. citizen and former navy seal with considerable land holdings in the area. He made no effort to hide his disdain for the LIBRE party, stating, “we don’t want those commies here.” He expressed his and everyone’s “strong support” for the ruling National party.

We visited areas where there was no electricity or an internet connection to transmit the results. In many cases the technical person in charge was not aware of the correct protocol to follow, and in some cases they asked us what they should do. In one voting center in the municipality of Santa Ana, military police demanded our personal information even though we were clearly identified as accredited observers. At one voting station in the barrio of La Joya in Tegucigalpa, I was pulled out in the middle of observing the vote count by TSE and military police and asked to leave. So I had to ask myself: if they can do this with international observers, what can they do with local observers and electoral participants?

Not to mention that we received numerous reports of vote buying and the refusal of access to opposition members at various voting centers across the country.

So when we compared our experience with the rest of our delegation who had also observed and documented serious and undeniable fraud in all 10 districts in which they observed, we came to the conclusion that our experience was not an exception, but rather the standard. We felt this opened up the elections to serious issues of fraud.

What also caught my attention was on Sunday night. We were sitting around the TV watching the vote count when David Matamoros, president of Honduras' electoral court and member of the governing National Party, announced the preliminary results. Despite only 54% of the votes counted, he announced the National party with 34.9% of the vote and LIBRE with 28.36%. Not to mention that he provided no details to back up the number that was given, like where that data was coming from, or that about 500 of the voting centers lack electricity or an internet connection, clearly meaning that those numbers would be outstanding until later that week. With such high stakes on the line, why would the TSE be so irresponsible as to give out results that were not substantiated or irreversible at that early point? What his announcement triggered was that all major news networks, locally and internationally, proclaimed Juan Orlando Hernández as the new president—in essence laying the ground work for the pre-determined outcome.

KE: There have been comments since the discovery of widespread fraud that the democratic path has failed, and that now it is time to step up the offensive against the oligarchy. What are your thoughts on this movement? Do you think it is a minority opinion or a real possibility?

There’s a significant movement that argues for the need to strengthen the resistance movement with a focus on social and political struggle through mass mobilization from below—local struggles in communities and barrios that build an inclusive and participatory process that focuses on transformative solutions as opposed to reforms. Many of these groups are already involved in struggles for territory, indigenous culture, anti-patriarchy, etc—groups like the Civic Council of Popular and Indigenous Organizations of Honduras (COPINH), Garifina communities, and women’s organizations.

In retrospect one can say the biggest losers in these elections are the social movements. This is because much of the energy has gone into the electoral process and into building the LIBRE party at the expense of strengthening the social movements. The results can be seen in the weak response on the streets by the LIBRE party and the movements that support them. It took a week for people to take to the streets to protest the fraud, and it was not as significant a turn-out as we saw in the past against the coup.

KE: While your delegation released its denunciation of the election results, Canada has remained silent—with its silence working as acceptance. Can you discuss some of the reasons why Canada is so supportive of the national party?

RB: The Canadian government is recklessly focused on trade and investment at any costs, even at the expense of human and labor rights abroad. In Honduras it’s the mining, sweatshop, and tourism sectors that Canadian corporations covet. It was no coincidence that the Canada-Honduras free trade agreement was signed just weeks before the Presidential election in Honduras. This was, in my opinion, a quid pro quo where Canadian corporations will benefit from the investment protection measures contained in the Chapter 10 of the bilateral free trade agreement, and in return Canada bestows further legitimacy to an electoral process that is largely illegitimate.

KE: Can you comment on the breakaway member of the EU delegation that has denounced the Honduran election as a fraud? How do delegations work? Can you provide some insight as to how the decision making process unfolds?

RB: I can’t really comment as to the inner workings of the EU delegation or process. In terms of Leo Gabriel, the European delegate who has come out questioning his own EU report, I think it does make some things clearer in terms of the ulterior motives behind the EU and its need to whitewash Honduras’ image. Much like our government, they, too, are willing to turn a blind eye to corruption, fraud, violence, murder, and human rights violations, all to safeguard their corporate profit. Therefore, presenting a clean and transparent electoral process helps the European Union to clean up Honduras’s image around the world and set this commercial project into motion. [Raul directed my attention to an agreement signed by the European Union and the Central American region (EU-CA AA).]

KE: What can those of us outside of Honduras do?

RB: Solidarity is the key tool to help the Honduran people in their struggle. But just as important for those of us who live here in Canada is to join the local struggles against things like the pipelines, so-called trade agreements, anti-fracking, mining, indigenous sovereignty, and so on, that challenge the status quo. For its our Conservative government in collusion with transnational corporations that seeks to impose a model that priorities profit over human life, the environment, democracy, etc—in Honduras, but here in Canada as well.