What if The New York Times Covered the United States Like Venezuela?

On Sunday, February 10, The New York Times published a slight, 500-word dispatch on Venezuela from reporter William Neuman titled, “Venezuela, Despite Troubles, Proudly Seizes On a Hat.” The article’s headline, like Neuman’s content, was designed to illustrate that in Venezuela, “political theater of the absurd is commonplace.”

A “great cap kerfuffle” is underway, reported Neuman, in which leaders of Chávez’s political party are now donning the same tricolor hat they once denounced opposition candidate Henrique Capriles for wearing. Such melodrama, Neumann seemed to argue, serves as a distraction from the problems that beset Venezuelan society. 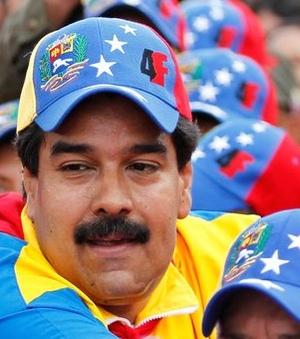 The breadth of those problems, as conveyed in Neuman’s previous coverage, is immense. As insight into the economy, he has provided vignettes of botched Christmas tree shipments and a government ice cream factory that closed down. Among other maladies, he points to a “stagnant” oil sector in need of increased production levels. Neuman’s reporting thus poses a paradox for the reader: despite “economic problems, widespread corruption, rampant crime and daily hassles”—suffered by “rich and poor alike”—Chávez has retained his “ability to convince Venezuelans that the Socialist revolution he envisions will make their lives better.”

In point of fact, Venezuelans’ lives are already better in many ways. Like countless other journalists, Neuman prefers relating anecdotes, shying away from simply reporting Venezuela’s socioeconomic trends, which are hardly in dispute among economists. Over the past 10 years, since Chávez gained control of the country’s oil revenues, Venezuela’s per capita income has grown by 2.5% a year, its unemployment has been cut in half, and free health care has been expanded to many millions as a human right—little wonder, then, that poverty has declined by 50%, absolute poverty by 70%, and infant mortality by a third. It would therefore be impossible for Neuman to relate these figures to the Times’s readership while maintaining his misleading claim that Chávez has presided over many years of “stubborn poverty.” So he just excludes them.

Even more skewed is his portrayal of Venezuela as a uniquely coercive and menacing state. Leading up to Venezuela’s elections last October, he presented as fact the unverified allegation that “[g]overnment workers are frequently required to attend pro-Chávez rallies.” His article, “Fears Persist Among Venezuelan Voters Ahead of Election,” also focused on “anxiety” over “a new electronic voting system that many Venezuelans fear might be used by the government to track those who vote against the president.” Neuman did not even hint at the findings of international observers like the Organization of American States, which have for years vouched for the integrity and security of Venezuela’s electoral procedures. In fact, the Carter Center’s report on the electronic system’s technical features concluded that “[t]he software of the voting machines guarantees the secrecy of the vote.” 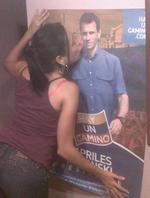 In his zeal to uncover the government’s “especially potent weapon”—the “fear factor”—Neuman committed perhaps his most blatant journalistic oversight, by including the remarks by Fabiana Osteicoechea, a 22-year-old Caracas law student.  “I’m not going to take the risk [of voting for opposition leader Henrique Capriles]” she said, despite being described as his “enthusiastic supporter.” She added, “I want to get a job with the government so, obviously I have to vote for Chávez.” As a quick search revealed, however, her fear of Chávez loyalists sabotaging her career had not dissuaded her from posting a photo of herself kissing a poster of Capriles on her public Twitter account.

Reassuringly, Neuman’s two most recent pieces have demonstrated his newfound ability to perform Twitter searches—the cap controversy “has given rise to plenty of jokes,” he wrote, and he included a quip from “one wag on Twitter” as an example. For his article on Friday, February 15, Neuman simply reposted two tweets from Capriles as his conclusion.

Neuman’s inconsistent Twitter proficiency is a minor fault compared to his newspaper’s biased presentation of the political environment in Venezuela as compared with the United States. Neuman depicts a public whose attention is diverted from deep crises by trivial posturing, like the administration’s attempt to appropriate its opponents’ symbols. Meanwhile, the government maintains a “strident foreign policy” and its leadership is populated by “yes men.”

Yet that exact portrayal could be equally applied to the United States. When the introduction to Neuman’s piece on Venezuela’s hat scandal is modified to substitute U.S. current events for Venezuelan ones, the Times’s double standards become obvious. It would be impossible for such an excoriating lead to appear in the paper:

WASHINGTON — The United States seems to lurch from one crisis to another. A recently leaked memo shows that the Obama administration has granted itself the legal authority to perform extrajudicial assassinations of U.S. citizens. Last week, a study found that over a quarter of the world's countries participated in a CIA-led program of global kidnapping, torture, and detention. On February 9, the First Lady attended the funeral of shooting victim Hadiya Pendleton, 15, as the government struggles to address the over 11,000 gun-related homicides a year. The unemployment rate has stubbornly hovered near 8%, and lurid murders are the stuff of daily headlines.

But high on the list of government priorities was an unexpected item: skeet shooting. 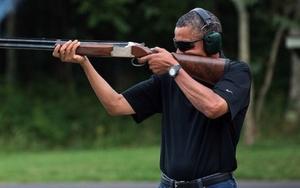 This final item, of course, refers to Obama’s recent comments about shooting clay pigeons “all the time” in the midst of his effort to ban assault rifles. Five days later, responding to press requests, the White House disseminated a photo of the president firing a shotgun.The effort nevertheless failed to curry favor with gun owners who opposed his legislative proposals.

It is obvious there is little substantive difference between a politician wearing a cap styled like his opponent’s, and a politician posturing as a shooting enthusiast, given each country’s context. But, as it did with Venezuelan cap wearing, would the Times treat as a distraction Obama’s unsuccessful bid to insinuate himself into the good graces of opponents to gun control? Of course not.

Rather than write a short, bemused piece on the “absurdity” of this “political theater,” Times reporters instead conducted scrupulous “database searches of Mr. Obama’s speeches and interviews,” finding “no mention” of Obama’s use of Camp David’s skeet-shooting range in their 1,000-word story on the issue. Other newspapers covered it with even greater fervor. The Washington Post dedicated 950 words on page A2 of its newspaper, and another 1,700-word fact-check piece on its website; USA Today printed six different pundits’ views on the matter. 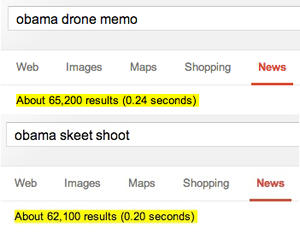 The major news outlets’ frenzy over this nonissue contributed to its heightened public profile—to such an extent that it attained a similar level of newsworthiness as the Obama administration’s legal justifications for killing its own citizens. On February 10, the date on which Neuman’s “cap kerfuffle” article appeared, Google News searches showed that Obama’s shooting of clay pigeons had prompted 95% as many news results as his Justice Department’s memo authorizing drone killings. [The phrase "obama drone memo" returned the highest number of news results out of a pool of related search terms, as did "obama skeet shoot."]

Setting aside the media’s general obsession over drivel, the Times’s differing treatment of Venezuela and the United States conforms to its pattern of criticizing the governance of countries deemed enemies of the United States, while providing much more docile coverage of domestic leadership. Thus, New York Times contributors, as well as its editorial board, have railed against the “authoritarian” behavior of Chávez (and of Ecuador’s president, Rafael Correa). But the newspaper is guaranteed never to describe Obama as a “strongman,” an “autocrat” or an “authoritarian” as he arrogates to himself the radical power to secretly kill any U.S. citizen without due process—even, possibly, on U.S. soil.

Similarly, Neuman’s news stories in the Times characterize Venezuelan foreign policy as “strident” and “contentious,” but the paper does not use such language when reporting on U.S. foreign policy—even as South African Nobel Peace Prize winner Desmond Tutu, in a letter to the Times, speaks on behalf of “those of us who live in the rest of the world” in condemning Washington’s international drone-assassination program.

Finally, the headline to an article by Neuman described Chávez’s vice president as a “yes man,” and the piece reported critics’ claims that new government employees are judged “by their loyalty” to Chávez. But the Times included no derogatory words in its reporting toward Obama’s Justice Department, which drafted the leaked assassination memo. Such language would be warranted, however. As constitutional law expert Glenn Greenwald argues, this secret memo is obviously “the by-product of obsequious lawyers telling their Party's leader that he is (of course) free to do exactly that which he wants to do.”

The newspaper's reporting reinforces attitudes that Latin American politics can be little more than a primitive charade, starring authoritarian leaders and a hoodwinked public, punctuated by risible distractions. Thankfully—at least within the world of New York Times coverage—the “political theater of the absurd” isn’t “commonplace” here at home.

Keane Bhatt is an activist in Washington, D.C. He has worked in the United States and Latin America on a variety of campaigns related to community development and social justice. His analyses and opinions have appeared in a range of outlets, including NPR, The Nation, The St. Petersburg Times, and CNN En Español. He is the author of the NACLA blog “Manufacturing Contempt,” which critically analyzes the U.S. press and its portrayal of the hemisphere. Connect with him on Twitter: @KeaneBhatt