White smoke is rising in Havana, Cuba where the negotiators of the Juan Manuel Santos and the insurgents of the Armed Revolutionary Forces of Colombia (FARC) have been negotiating since early last year. The two sides have almost agreed on the most important issue on the agenda: the agrarian question.
Tweet
Nazih Richani
Cuadernos Colombianos
3/19/2013

White smoke is rising in Havana, Cuba where the negotiators of the Juan Manuel Santos and the insurgents of the Armed Revolutionary Forces of Colombia (FARC) have been negotiating since early last year. The two sides have almost agreed on the most important issue on the agenda: the agrarian question. I said almost because of the FARC’s insistence on the expansion of Peasant Zones.

So far, the FARC has clearly demonstrated its commitment to a peaceful compromise provided that the state commits to find a solution of the enduring institutional legacies of Spanish colonialism: the encomienda, which was succeeded by the hacienda system, which in turn gave grounds to the emergence of latifundios (large land ownership)—all of which were sustained by the mita (tribute) system in which the indigenous population were forced to sell their labor of 15 or more days per year to the latifundistas and to the mine owners. The mita system was supplanted by sharecropping which remained an important form of labor exploitation well into the 20th century. 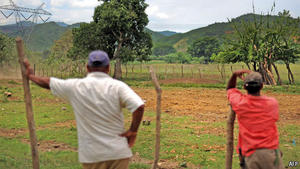 In Colombia, the outcome of these institutions was one of the most skewed land distributions in Latin America, alongside Brazil and Guatemala, where large landowners retained significant political power. The Colombian recalcitrant large landowning elite hindered two previous attempts (1936 and 1968) of land reforms that would have allowed the creation of economies of scale fomenting capitalist development based on large-scale agribusiness and industry. The process was derailed and the peasantry paid the heavy price on top of centuries of exploitation, dispossession, and brutal oppression.

The last attempt at land reform coincided with the emergence of the narcotraffickers in the 1970s through the marijuana “Golden of Santa Marta,” which created the first bonanza of narco-dollars, most of which being invested in land and real estate. This was followed by the second and more significant influx of billions of dollars in the 1980s, 1990s, and 2000s, which was invested in land put to use through cattle ranching. This boosted the landed elite ranks, furthering the concentration of land ownership from 0.80 to 0.85 (where zero is perfect equality and the value 1 indicates that all properties are owned by one person). According to the Geographic Institute Agustín Codazzi (Igag), this translates into a mere 1.62% of landowners owning 43% of the lands.

More important, the emergence of the narcobourgeoisie faction gave a boost to the landowning elite, allowing them to reassert their political and economic power. The narcobourgeoisie invested heavily in land due to the relative ease in using property as a money-laundering scheme, which conflicted with the interests of the peasants and the rebels. This in turn created a class affinity between the narco-bourgeoisie and the traditional landed oligarchy.

The inequitable distribution of land and power cemented class interests and allowed the narcobourgeoisie the economic capacity to build private armies capable of safeguarding the class interests of the entire landed elite. This may explain their success in exercising influence and political power in an economy where the agrarian sector contributes to only (a diminishing) 7% of the GDP, while the service sector contributes 55% and manufacturing 38%.

This is the paradox that Colombia presents to insurgents, academia, and policy makers. It is an interesting case in which pre-capitalist modes of production, as the ones mentioned above, were embedded in new modes and relations of production only to become entangled with a contingency such as narcotrafficking. To this paradox add that Colombia is today the fourth largest economy in Latin America, after Brazil, Mexico, and Argentina.

The FARC, for example, acknowledging the contradictions and mutations of the country’s economic history— colonial and post-colonial—that produced it as a rebel movement, is bringing into the forefront the expansion of “Peasant Zones” to safeguard the peasant economy. The idea is not new. The creation of Peasant Zones was promulgated in Law 160 of 1994, but was never seriously pursued or implemented by the state. Since the introduction of this Law, only 830,000 hectares were redistributed and benefited only 75,000 people. This was while millions of subsistence peasants were exposed to violence, increasing dispossession, and aggressive encroachments of large landowners, narcobourgeoisie, speculators, bio-fuels industries, multinational mining corporations, and oil companies.

The FARC is calling for the expansion of the protection of “Peasant Zones” to include 9,5 million hectares and provide these peasant communities autonomy similar to the ones that the 1991 constitution granted the Afro-Colombian and indigenous groups. This sparked the ire of the reactionary faction of the landed elite, led by the cattle ranchers and political conservatives such as the Minister of Agriculture a descendant of the Antioquia dominant class and coffee elite. Statistics are showing that the peasant economy is more efficient and productive than the so-called capitalist large-scale farming.

Currently the small-scale peasant economy produces more than 60% of the country’s food needs which are cultivated in only 4.9 million hectares. If the peasant zones were to expand on the magnitude suggested by FARC, Colombia will not only secure its food supply, but it will generate enough surpluses improving the standards of livelihood of almost 35% of its population and create a multiplying effect on the overall economy. This may lay down solid foundations for a durable peace and a sustainable development. This is a proposal that merits serious attention.

Friday March 22, two thousand peasants are gathered for their third national meeting in San Vicente del Caguan to push forward the initiative to expand the Peasant Zones. This meeting represents the historical affinity and organic links between the peasantry and the FARC.