Recent data on land titling and redistribution in Bolivia provide a useful picture of what the Morales government has accomplished to date, as well as the unfinished business that lies ahead.
Tweet
Emily Achtenberg
Rebel Currents
3/31/2013

Land reform in Bolivia, and the promise of land redistribution from wealthy latifundistas and agrobusiness elites to poor farmers and indigenous communities, has been a hallmark of President Evo Morales’s administration. Recent data from the National Agrarian Reform Institute (INRA) provide a useful picture of what the Morales government has accomplished to date, as well as the unfinished business that lies ahead. 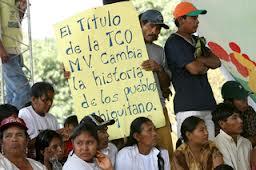 Credit: anbolivia.blogspot.comAccording to INRA, 157 million acres of land have been surveyed and titled since 1996 under Bolivia’s land regularization laws, benefiting more than 1 million people. Some 134 million acres, or 85%, have been titled during the last seven years under Morales, compared to just 23 million between 1996 and 2005 under past neoliberal governments.

One-third of all regularized land is now held collectively by indigenous and peasant organizations in the form of self-governing Native Community Lands (TCOs or TIOCs)—primarily, but by no means exclusively, in Bolivia’s eastern lowlands. Another 22% is owned in the form of individual or family plots by small farmers and “colonizers” (western highland farmers who have resettled in the lowlands). Together, peasants and indigenous communities hold 88 million acres of titled land (55%), more than double the amount they controlled in 1992, according to INRA.

Another 57 million acres (37%) of regularized land is now titled to the Bolivian government—a virtually non-existent category pre-INRA. Of this total, some 3.5 million acres has been redistributed to peasant and indigenous groups, benefiting 11,373 families and 271 communities—virtually all under Morales. Another 11.6 million acres is potentially available for redistribution (most state lands, protected as forests and national parks, are not available). The remaining 7% of titled land is owned by large and medium-sized owners.

Of the 290,000 land titles issued, more than 90% have been issued under Morales. Almost one-quarter have been granted to women, and another 37% to men and women jointly. This marks an historic shift for Bolivia, where women have long been excluded from land ownership. 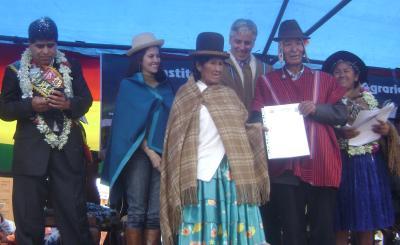 Still, the pace of land titling has fallen short of legal requirements and popular expectations. The amount of land regularized to date represents only 60% of the total 262 million acres in Bolivia that is legally required to be titled by October 2013. INRA officials say they will need another five years to complete the process, with the most complicated and conflicted ownership situations yet to be addressed.

Critics, including Juan Carlos Rojas, former director of INRA under Morales, charge that the land titling and redistribution process has slowed considerably in the last couple of years. The data shows between June 2011 and October 2012, only 11 million acres were titled—less than half the average annual rate achieved under the first five years of the Morales government (based on Rojas's statistics). Additionally, in 2012 only 136,000 acres of government land were redistributed (to peasant and indigenous communities), compared to an annual average of 222,000 acres over the previous 6 years.

Growing pressures for land redistribution and conflicts between social sectors over land have posed major challenges for the Morales government. Western highlands campesinos, representing 70% of Bolivia’s rural population, are increasingly land-poor, as their “minifundios” (small parcels) secured in the 1952 Revolution have been compromised by subdivision over successive generations—and more recently, by climate change. Many have migrated to the eastern lowlands and settled on the fringes of protected areas, clashing with indigenous groups who regard these territories as their ancestral lands. A case in point is the ongoing TIPNIS highway controversy, fueled in large part by a conflict over land. 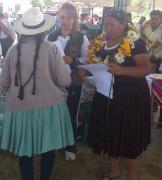 Rural Cochabamba. Credit: inra.gob.boIncreasingly, peasant and settler organizations view lowland indigenous groups as the “new latifundistas,” controlling vast tracts of seemingly idle land (through their TCOs and TIOCs) while they themselves have little. In part, this reflects a contrast in worldviews and economies between nomadic lowland peoples, who regard their territory as a collective resource to support fishing, hunting, and other subsistence activities, and highland campesinos, who see land as belonging to those who use it productively. Campesino groups also resent the current legal prohibition against redistributing state lands through individual and family titles, their traditional form of ownership.

According to the NGO Fundación Tierra, much of the 11.6 million acres of state land that could be made available for redistribution is compromised and not suitable for productive use. Still, vast tracts of desirable agricultural land in the eastern lowlands continue to be held by agrobusiness and ranching elites (including many foreigners)—dating back to the 1970s, when military dictators awarded patronage land grants to their political cronies to promote export agriculture. While holdings that predate the 2009 Constitution are exempt from the legal limit of 12,350 acres, critics argue that much of this land is speculatively held, not serving a socioeconomic purpose as required by law, and could be reclaimed by the government through an aggressive land titling process.

By some estimates, the Morales government has seized around 25 million acres from owners who have failed to demonstrate a productive or legal use of their land, including several high profile cases involving debt servitude, fraudulent deeds, or obvious lack of investment by conservative political opponents. Still, there is growing concern that the government's new focus on agroindustrial productivity has compromised its willingness to confront large estate holders, and its commitment to land redistribution in general. 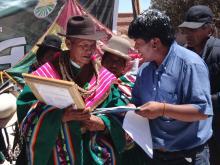 In an effort to promote food security and expand the agricultural frontier, Morales has recently sought to forge alliances with the agro-business sector. A new law could exempt more than 12 million acres of illegally deforested land (outside the national parks) from reverting to the state, if owners pay a small fine and commit to agricultural reuse.  To facilitate owners’ access to credit, the government has also agreed to suspend until 2018 the verification process required to determine whether land holdings are serving a socioeconomic purpose (it’s currently unclear whether this controversial proposal has been modified to exclude the largest estate holders).

For Rojas, such measures suggest “not only [that] the process of agricultural transformation [has] stalled, but that there is the risk of it being reversed.” In any case, they will serve to intensify the current conflict between highland  campesinos and lowland indigenous groups over Bolivia’s land policy. A law proposed by the national peasant organizations would legitimize illegal settlements in protected areas such as the TIPNIS, allow the reversion of indigenous lands, and permit private ownership of redistributed state lands—confirming the worst fears of lowland indigenous groups.

Unless the Morales government is willing to confront the twin challenges of the minifundio and the latifiundio through a more aggressive and strategic land redistribution policy, the growing controversy over land could shape up to be even more powerful than the TIPNIS conflict.