As a result of many dozens—possibly hundreds—of messages from readers over the past few weeks that criticized The New Yorker’s inaccurate coverage of Venezuela, reporter Jon Lee Anderson issued a response in an April 23 online post. This marks the first time the magazine has publicly addressed its controversial and erroneous labeling of Venezuela as one of the world’s most “socially unequal” countries.
Tweet
KeaneBhatt
Manufacturing Contempt
4/24/2013

As a result of many dozens—possibly hundreds—of messages from readers over the past few weeks that criticized The New Yorker’s inaccurate coverage of Venezuela, reporter Jon Lee Anderson issued a response in an online post on April 23. This marks the first time the magazine has publicly addressed its controversial and erroneous labeling of Venezuela as one of the world’s most “socially unequal” countries (I highlighted the error in mid-March).

Although Anderson deprives his readers of the opportunity to evaluate his critics’ arguments (he offered no hyperlinks to either of my two articles on the subject, nor to posts by Corey Robin, Jim Naureckas, and others), he is clearly writing in response to those assertions.

To his credit, Anderson unequivocally admits two of his three errors: regarding Venezuela’s homicides, he acknowledges that he falsely wrote “that Venezuela had the highest homicide rate in Latin America. Actually, Honduras has the top rate.” Anderson proceeds to explain why Venezuela’s high homicide rate is nevertheless a grave problem—a position none of his critics, myself included, dispute.

The importance of this error rests instead in its revelation of a media culture under the influence of the consistent demonization of a country deemed an official U.S. enemy. This culture certainly played a role in allowing Anderson’s obvious falsehood to remain uncorrected for five months—five months after I first wrote about it, one month after I directly and publicly confronted Anderson about the error, and even then, days after I wrote another article urging readers to demand a correction.

While The New Yorker has dedicated literally no articles to U.S. ally Honduras since its current leader Porfirio Lobo came to power in repressive, sham elections held under a military dictatorship, Anderson was allowed to assert that Venezuela—a country with half the per capita homicides of Honduras—was Latin America’s leader in murders. One might reasonably suspect that a claim on The New Yorker’s website asserting that the United States had a higher homicide rate than Bolivia (Bolivia’s rate is actually over two times as high), would be retracted more expeditiously.

Anderson’s explanation for his second error—claiming that Chávez came to office through a coup d’etat rather than a free and fair election—further lays bare the corrupting effects of the generalized vilification of Chávez on basic journalistic standards of accuracy.

Anderson writes that despite his gaffe, he obviously knew Chávez “gained the Presidency by winning an election in 1998,” as he had “interviewed Chávez a number of times, travelled with him, and came to know him fairly well.” For Anderson to write such an egregious misstatement, then, and have it pass through what is likely the most rigorous fact-checking process in the industry, exposes a pervasive ideology under which he and his many editors and fact-checkers operate. As Jim Naureckas of Fairness & Accuracy in Reporting wrote, “It's like writing a long profile on Gerald Ford that refers to that time when he was elected president.”

A number of letters I’ve received dispute, out of context, my reference to “the same Venezuela as ever: one of the world’s most oil-rich but socially unequal countries”; several cite an economic statistic known as the Gini coefficient—a measure of income inequality.

Notice that Anderson never tells his readers what Venezuela’s Gini coefficient actually is. According to the United Nations, Venezuela’s Gini, at 0.397, makes it the least unequal country in Latin America and squarely in the middle range of the rest of the world. Only by sidestepping this brutal empirical obstacle can Anderson attempt to lay out his case. He carries on by reposting three paragraphs of his original essay, which in no way mitigate the falsity of his original claim, for “context.” Anderson finally concludes by offering a novel justification for his error:

In terms of some of the components of social inequality, notably income and education, Chávez had some real achievements. (Income is what’s captured by the Gini coefficient, although that statistic has its own limitations, some particular to Venezuela.) But in housing and violence, his record was woefully insufficient. Those social factors are intimately related, to each other and to the question of equality.

A quick recap is in order before unpacking Anderson’s argument. Readers may remember that he first responded to evidence on income inequality by proclaiming, on Twitter, his agnosticism toward empirical data. Next, a senior editor at the magazine justified Anderson’s contention by arguing that Venezuela was one of the most unequal amongst other oil-rich countries—a point I debunked. Now, Anderson has settled on a definition of social inequality that minimizes Venezuela’s high educational and income equality in favor of high homicide rates and unequal housing.

But simply saying that Chávez’s record “was woefully insufficient” on housing and violence does not naturally equate to Venezuela’s standing as a world leader in social inequality. Anderson must rely on comparative international statistics to justify his position, but fails to do so.

While Venezuela’s homicide rate is high by international standards and a significant social ill, this alone does not necessarily make the country more socially unequal than another country with a lower homicide rate. Are Venezuelan homicides more skewed toward low-income residents than those in Costa Rica? Or Haiti? Are Venezuelan murders more targeted at women or ethnic minorities than those in Mexico or Guatemala? And given that the high homicide rate directly affects far fewer than one in a thousand Venezuelans annually, how could this statistic possibly outweigh the effect of massive income-inequality and poverty reductions? If he is solely basing his argument on murder rates, Anderson has no credible explanation as to why Venezuela is one of the world’s most socially unequal countries.

Anderson also doesn't offer statistics showing that housing is more unequal in Venezuela than anywhere else. That’s because it’s not.

Out of the 91 countries for which the United Nations has available data, Venezuela is 61st in terms of the percentage of its urban population living in slums.  That is to say, two-thirds of the world’s countries with available data have larger percentages of their urban citizens living as slum dwellers. In the Western Hemisphere, this includes Guayana, Honduras, Peru, Anguilla, Guatemala, Nicaragua, Belize, Bolivia, Jamaica, and Haiti. 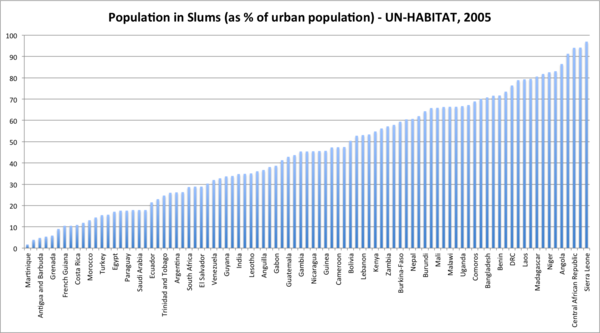 click to enlargeIt is also worth mentioning that this data was taken from 2005, when the percentage of Venezuela’s urban population living in poverty and extreme poverty was at 37%. By 2010, according to the United Nations, it had been cut by a quarter, to 28% (p. 43). Furthermore, 2005 predates a massive governmental push in 2011 to build affordable housing. Earlier this year, Venezuela’s Housing Commission chair asserted that “in the years 2011 and 2012, the Bolivarian government together with the people reached the goal of building 350,000 homes.”

It appears, then, that Anderson has discovered a new definition of “social inequality” that has eluded economists and sociologists worldwide—one that systematically downplays Venezuela’s educational and income equality while emphasizing a high frequency of murders and a rate of slum-dwelling that is low by international standards.

While one can applaud Jon Lee Anderson for finally acknowledging the value of social indicators and statistical data, he and his magazine cannot be allowed to define “social inequality” any way they see fit. No social scientist analyzing the available data could argue, like Anderson, that Venezuela is one of the world’s most socially unequal countries. While semantics games may be expedient in avoiding a necessary correction, readers should let The New Yorker’s editor David Remnick (david_remnick@newyorker.com) know that a retraction of Anderson’s claim is long overdue.

Update (4/24): FAIR's Jim Naureckas also offers sharp criticism of Jon Lee Anderson and his fact-checkers for a transparently inadequate attempt to justify his error regarding Venezuela's social inequality. Read more, at "Jon Lee Anderson Explains: Because I Said So." 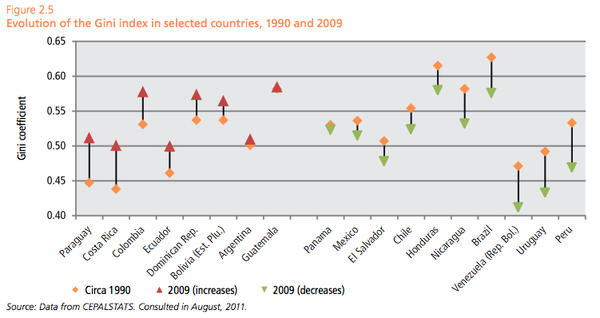 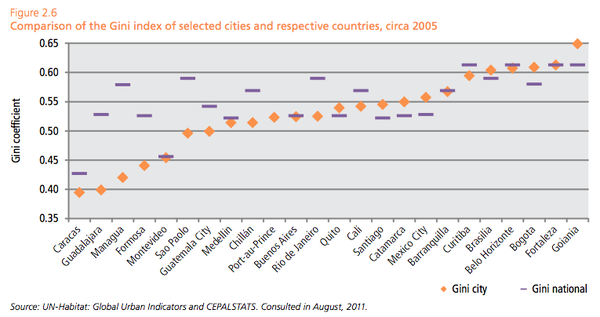 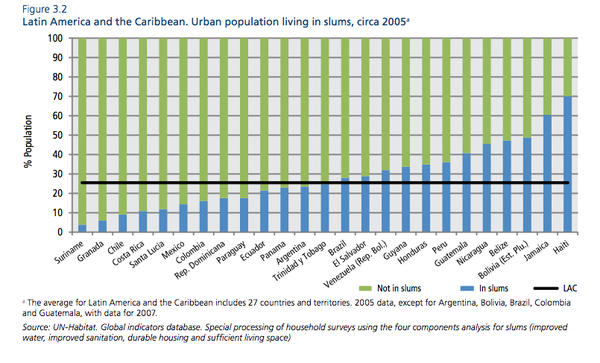 Keane Bhatt is an activist in Washington, D.C. He has worked in the United States and Latin America on a variety of campaigns related to community development and social justice. His analyses and opinions have appeared in a range of outlets, including NPR, The Nation, The St. Petersburg Times, and CNN En Español. He is the author of the NACLA blog “Manufacturing Contempt,” which critically analyzes the U.S. press and its portrayal of the hemisphere. Connect with his blog on Twitter: @KeaneBhatt