While the relationship between China and Guyana was initially established in order to foster mutual cooperation and development, the past decade has witnessed a surge of Chinese interest in Guyana’s natural resources, leading many Guyanese citizens to question the value of this supposedly equal and beneficial partnership.
Tweet
Kevin Edmonds 6/26/2013

The relationship between China and Guyana goes back over 40 years. During the height of the Cold War, and in contrast to the policy of most of the hemisphere which was under the influence of the United States at the time, Guyana and China established relations on June 27, 1972. While the relationship was initially established in order to foster mutual cooperation and development, the past decade has witnessed a surge of Chinese interest in Guyana’s natural resources, leading many Guyanese citizens to question the value of this supposedly equal and beneficial partnership. 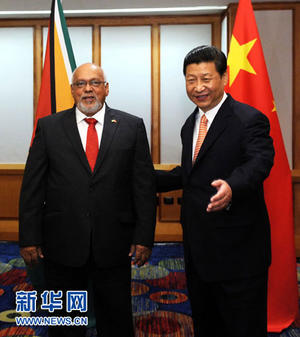 An important case in point comes from the controversial Bai Shan Lin investment plans for Guyana. The Bai Shan Lin company was granted a forestry concession which consists of nearly one million hectares of rainforest, from which it will harvest logs and ship them out of Guyana. In addition to the acquisition of significant land holdings, the company has announced the creation of a very large “Guyana-China Timber Industry Economic & Trading Cooperation Park” and a 400-acre “Bai Shan Lin Real Estate Development Project.”

While the investment is indeed large, it is more likely that the benefit to the people of Guyana will be quite small outside of political circles given the nature of Chinese companies to import their own labor to staff operations in Guyana. While many Guyanese people are underemployed or in need of work, Chinese laborers were brought into Guyana for the construction of the new Marriott Hotel in the capital of Georgetown earlier this year. With the growing amount of criticism over the surge of recent Chinese investment in Guyana's growing forestry and mining sectors, the political opposition has called for investment agreements between the Guyanese government and Bai Shan Lin to be made public—but so far little headway has been made. However, the details which have emerged paint a troubling picture for any attempt for Guyana to establish a model of sustainable and equitable development.

Some of these investment policy “advantages” of doing business in Guyana were highlighted in a PowerPoint presentation created by Bai Shan Lin. The presentation reveals that Guyanese trade agreements with China allows for “machinery, equipment, raw material, transportation means and office supplies for production use are exempted from import duty and excise tax.” Furthermore, under the agreement, new enterprises benefit from tax exemptions, custom duties on exports, and have no regulations on the foreign transfer of their profits.

A recent article in the Guyana Chronicle stated that “Guyana is open for business” when perhaps a more appropriate slogan would be that the Guyanese politicians are instead selling the country out to business. Guyana’s President Donald Ramotar sought to defend China’s growing presence in Guyana against the rising criticism, stating that “History will show you that China has not exploited and colonised any country. In fact, the record of China… it has been helping to build societies in Africa and other parts of the world, and we must stand up and make the voice of the majority heard because there seems to be people financed from somewhere, dedicating themselves to slander and attack.”

Assuming that models of economic development or trade are static is unrealistic and of little value when trying to understand what is really happening on the ground. The term “Capitalism with Chinese Characteristics” was adopted as an easy way to describe and distinguish the uniquely regulated nature of the Chinese economy. It seems that a similar term could be adopted for China’s resource based foreign investment policy.

While the Guyanese government is a willing partner in these new investment agreements, it is important to realize that it is an incredibly unbalanced relationship that maintains the essence of colonialism—the exportation of raw materials and the increasing dependence on Chinese manufactured goods, capital, technology, and knowledge. While it is true that China has not followed the European or North American model of instituting a formal model of colonialism via violent invasion and occupation, it does not mean that China is not engaging in a modern form of colonialism with Chinese characteristics.

While countries all over the world are scrambling for investment, it should be done in a manner that will protect the long-term interests of the recipient nation’s population and environment. To jumpstart an economy dependent on short-term resource extraction without ensuring that necessary regulations in place is a recipe for disaster. The strong interest of China in Guyana provides a real opportunity for the government to establish policies which will generate value and public benefits from their responsible and regulated extraction of their natural resources.

According to the most recent World Bank statistics, an estimated 43% of the Guyanese population falls below the poverty line, with 29% living in what is categorized as extreme poverty. In order to address the longstanding roots of poverty and inequality in Guyana, revenue from resource extraction to fund state investments in healthcare, education, and social services is needed. However, China and Guyana both share a similar feature—on paper they are both committed to socialism and serving the people. Yet, with a government selling off incredible quantities of land to Chinese companies, without any real change it is hard to imagine that the current acceptance of “colonialism with Chinese Characteristics” as the status quo will bring any tangible or visible return for the people of Guyana.