Immigrants: Much More Than an Abstract Number (Part II)

In the second part of this interview, Mexican journalist and author Eileen Truax offers her insights on the immigration bill that the U.S. Senate recently passed, and she explains why “the DREAMers” offer an example of the contributions of immigrants to the United States.
Tweet
Robert Valencia
NACLA-Global Voices
7/30/2013

This is the second part of an interview with Eileen Truax, Mexican journalist and author of Huffington Post Voces who recently released her book Dreamers: The Fight of a Generation for its American Dream. Migrant Journeys talked to Truax, who offered her insights on the immigration bill that the U.S. Senate recently passed, and explained why “the DREAMers”—more than 65,000 youth brought to the United States as children by their migrant parents and who remain classified as “undocumented”—offer an example of the contributions of immigrants to the United States. Read the first part of the interview here.

Robert Valencia: Let’s talk about the role of the media, especially the English-speaking media. We always hear about stories that concern Latinos but in the sections solely dedicated to Latinos, such as NBC Latino or FOX Latino. Do you think that the fact that mainstream media have exclusive platforms for Latinos may have a counterproductive effect since the point is to share the story of immigrants with those who are not connected to this issue or who are not close to the Latino community?

Eileen Truax: I share the same inquiry, however, this doesn’t mean these alternatives should disappear. It is important that these platforms address the topics of a community. The problem is that these platforms become the only places that talk about this community. Mainstream media still see immigrants (or what they call “ethnic” groups) as foreign bodies that invade this country. When you read Los Angeles Times or The New York Times or you watch TV, the discourse is still “them,” or “the Salvadoreans,” or “the Asians”, but there is never an inclusive language or something like “we as an American society.” But we, immigrants and citizens alike, share the same problems. When the housing market crashes or there’s a change in the healthcare system, it affects us all. If our education system suffers another blow, your kids and mine are being affected. That is to say we have problems not just related to Latinos or Asians, but we have issues as an American society because we’re one country. Whoever thinks that just because a person is not named Gonzalez is not affected by what occurs in the Latino community has no common sense and is not familiarized with the reality of our country. The big problem is that mainstream media are in denial, that is, they haven’t accepted that diversity is a reality in this country. 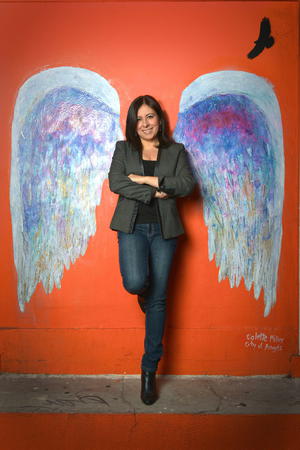 RV: Undocumented immigrants also pay taxes that have amounted to 1 billion dollars, but these stories don’t make it to the national spotlight. What should we do as journalists or communicators to take these stories get to the general public and counterattack the “amnesty” rhetoric?

ET: What we need to do is to give [these stories] a human face all the time. I think that we should stop chasing the news that stirs controversy. Unfortunately, the rhythm in which we see ourselves immersed in as a result of the surge of the Internet, despite being positive, has forced us to become “slaves of a click button.” There are three myths since the onset of Internet for those who are involved in journalism. First, that we have to be the first in delivering news before anybody else because then we lose. The second myth is that the more clicks we receive for our story then it becomes more important, and the third one is that people don’t read in full, so we have to give information piecemeal because people don’t like to read online. I believe these three myths are ruining in-depth journalism, which precisely has the function to make reality understandable to society. We are becoming people who just announce stories and we don’t take time to understand what’s happening. Case in point: “A truck crashed. A human trafficker was detained. Four were abducted. Two were killed.” This reads like an ad, but we don’t go in depth into these stories. We don’t know who the person who went to jail was or what happened to the immigrant who just arrived or the person who went to jail. We are not seeing stories in the long term; we just care about who publishes the story on the web first and how many clicks we receive. We even forget about our own mission and we have the moral obligation to tell stories we learn about. If you’re a reporter and have the privilege to discover stories first hand, we have the obligation to tell them and find the way to do so.

RV: Do you think it’s necessary to deploy more border security officers even if immigration to the United States has decreased considerably and thus this could represent an unnecessary expenditure to taxpayers?

ET: One thing is that the bill enacts a program that will allocate human and material resources to border security, and another is that a budget will be approved for this end. We had a similar experience in 2007 with the creation of a virtual wall on the border. Recession came and there were no funds to finance what the law approved. Now, budgets are approved each year, so just because the law says we can earmark millions and millions of dollars to the border doesn’t mean each year when budgets are approved the money will be there. I don’t believe this is the most important factor; the problem is that we’re losing the focus of what immigration reform is. The very same initiative is founded on its name; it starts by determining the element of security to later talk about immigration. Determining the well-being or the recognition of rights of more than 11 million people based on how the government can successfully protect the border is purposeless. Again, from my viewpoint, the failure of it all is that we are not understanding immigration reform as a human rights and social justice matter, but rather as an issue of state security and partisanship.

RV: Anything else you’d like to add that was not discussed in this interview?

ET: We must stop thinking about immigration as a partisan matter and a negotiating prize come Election Day. We must think of people, and I believe that in order to achieve this end a fundamental tool is to have a close approach to the DREAMer story. I return to the beginning of this interview, because I still believe that the DREAMer generation is the most generous face of undocumented immigration and what this country can be. These youth seek to legalize their status and give back to this country. By definition, the DREAMers are people who want to continue their higher education studies and become doctors, lawyers, nurses, etc. They are young people who will become the labor force in this country, the ones who will be paying retirement for those who are now seating in Capitol Hill and the “baby boomers” who know they don’t have a generation below them that is wide enough to sustain their social security and retirement funds. We’re not talking about just doing a favor to a handful of youth; we’re talking about keeping this country buoyant if these are the youth that will become the working force while we’re retired. So the question is, where do we want them? Do we want them to work in the shadows at a restaurant or do we want them becoming successful professionals who spur economic growth and stability? Let’s answer these questions and then we’ll understand the need for an immigration reform.