Decisive Moment for the Pro-Immigration Movement in the United States

It has been almost 30 years since the U.S. pro-immigration movement has gotten so close to witnessing the passage of comprehensive legislation. This post is part of our series on Latin America: Migrant Journeys in collaboration with Global Voices.
Tweet
Robert Valencia
NACLA-Global Voices
7/9/2013 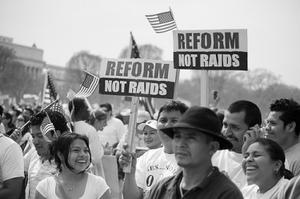 It has been almost 30 years since the U.S. pro-immigration movement has gotten so close to witnessing the passage of comprehensive legislation. The immigration bill that has been circling the Senate since the start of 2013 cleared a hurdle when the border security amendment passed with a vote of 67-27 on June 24.

On June 27, a vote of 68-32 in the Senate backed immigration reform, a level of support that has not been seen since the 1986 law that legalized three million people. Now, the House of Representatives must decide whether it supports the Senate’s decision.

The 2013 immigration bill seeks to create a roadmap for citizenship while strengthening border security and raising the cap on visas for high-skilled workers. It also intends to establish a new visa program for low-skilled workers on America's farms and elsewhere.

In 1986, then-President Ronald Reagan signed an immigration law that very much resembles that of the "Gang of Eight's": tighter security border, strict rules over hiring undocumented workers, and the opportunity for those who entered the country without authorization to regularize their status.

A major difference between the two immigration proposals is that President Reagan considered the 1986 measure an "amnesty" to millions of undocumented people. Twenty-seven years later, "amnesty" is the term immigration advocates want to avoid at all costs, given the negative connotation Republicans have given the word. Rather, the word "legalization" seems to be accepted.

Nevertheless, one of the most controversial parts of the immigration bill also managed to be passed on June 26, when the Senate agreed to double the number of officers on the United States’ border with Mexico, despite the fact that the flow of immigrants to the United States has dropped considerably as a result of economic problems that the country has faced since the recession of 2008.

In fact, Speaker of the House of Representatives John Boehner (R-OH) has promised that the immigration issue will not be resolved quickly and explained that said reform could be prolonged until next year.

InmigranteTV [es] says that despite the obstacle that the House of Representatives could present, it does not downplay the Senate’s approval:

It is not that the Senate vote lacks importance. For starters, as it passed with a vote of 68 in favor and 32 against, the Group of 8—four Republican and four Democratic senators—proposal managed to go further down the intricate legislative path than any immigration initiative since the one that Ronald Reagan turned to law in 1986. And he did it, furthermore, with far from negligible Republican support: 14 conservative senators who, with their vote in favor, sent an important bipartisan message to their legislator colleagues in the Lower House.

For immigrants, the week of June 27 was full of important moments. Specifically, the U.S. Supreme Court voted to send the case of Fisher v. University of Texas back to the Fifth Circuit Court for further review. The case had challenged affirmative action in acceptance policies that allow universities to consider racial and ethnic diversity as one factor for admission. While the court did encourage further scrutiny of these policies, their decision does maintain these programs for increasing diversity in higher education.

On Twitter, members of Congress as well as ordinary people and media personalities share their opinions before Washington’s decision.

@RosLehtinen: Our immigration system does not work. The #reform will support families and create jobs. http://1.usa.gov/14duCQo

Still, some are skeptical of the Republicans’ intentions to improve immigration reform, like Alonso Credes (@alcredes), who responded to Ros-Lehtinen with the following tweet:

@alcredes: @RosLehtinen then convince the members of your party not everyone else...

According to an article published in Politico, Representative Filemon Vela (D-TX) resigned from the Congressional Hispanic Caucus on July 2 in an apparent protest over the coalition’s embrace of the Senate’s immigration bill, which includes an unprecedented increase in security measures, including about 20,000 in new agents to patrol the U.S.-Mexico border. A day later, he wrote the following in his Twitter account:

@RepFilemonVela: I am committed to immigration reform. I believe it is the primary domestic issue facing this nation http://tl.gd/n_1rl5gno

Representative Vela linked to his statement on the reform bill in which he outlines his opposition to the legislation. He explains that the border security measures only increase the environment of fear between nations, and is an irresponsible use of government funds, especially following sequestrations that have cut so many valuable services.

@lcvelez: The #US Senate approves change to immigration laws, which opens the door to citizenship for millions of undocumented immigrants

Undoubtedly, the pro-immigration movement has come very far to bring a broken immigration system to the glaring national spotlight while calling on legislators to take action. Despite clearing a hurdle on the Senate floor, it is likely that the bill will die on the House of Representatives at the hands of Republicans. This, in turn, will spark an ongoing fight to regularize millions of immigrants who want to call the United States home.