FARC negotiators Iván Marquez and Pablo Catatumbo have both been unsatisfied with the adamant refusal of the Santos government to tackle tough points in the peace negotiations. This is especially the case with disagreements having to do with the agrarian question.
Tweet
Nazih Richani
Cuadernos Colombianos
9/25/2013 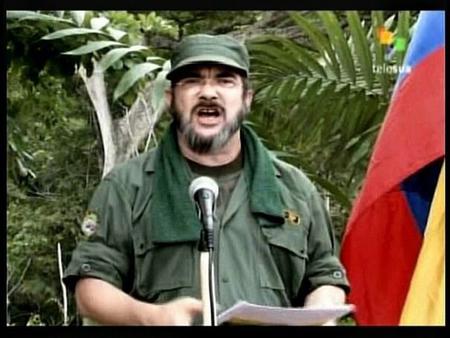 The peace process between the Armed Revolutionary Forces of Colombia (FARC) and the government of Juan Manuel Santos is in crisis. The FARC’s general commander Timoleón Jiménez, "Timochenko," said on Wednesday September 25, that he is instructing the FARC negotiators to reveal where the negotiations are taking place, and what agreements had been reached. This is in direct violation of what the FARC and the government had agreed to at the outset of the process—that nothing would be disclosed until the process was concluded. Since I have been following this process closely, I am sharing with my readers some important information and an analysis of what has led Timochenko to lash out.

An Informant who met with the FARC’s top negotiators a few weeks ago told me that negotiators Iván Marquez and Pablo Catatumbo were both unsatisfied with the adamant refusal of the Santos government to tackle tough points, especially those having to do with the agrarian question. This presumably involves discussions that have already been concluded. But what has happened is that the government has decided to leave the unresolved issues in the agrarian question to future discussions while presenting the case as though a conclusive agreement has been reached. All this while the FARC remained silent due to its commitment to wait until the talks concluded before announcing anything. Well, until now.

Santos in his attempt to outmaneuver the FARC and his political opponents—including his archival, former president Alvaro Uribe Velez—pushed the envelop by advancing two resolutions through Congress, both upsetting the FARC. One called for a referendum on the agreement when reached, rather than accepting the FARC´s call for a constituent assembly. Second, he offered a judicial framework for transitional justice without consulting the FARC. At the same time he presented to the general public an image of a government that was serious about peace. But the last straw for Timochenko was his speech at the United Nations and his embrace of the International Criminal Court (ICC), claiming that the court would support the peace process without addressing the question of "crimes against humanity" committed by the state and its proxies over the past five decades.

For the record, over the course of the conflict, the state and its paramilitary groups have committed more than 70% of the massacres, selective killings, disappearances, and almost all of the forceful displacements. That is to say that state agents with their paramilitary instruments and their death-squad allies committed most of the crimes against humanity. This raises the question of whether the ICC is going to hold the different presidents of Colombia (including the deceased) accountable, along with the Colombian public forces(military, police, and intelligence services) for all their crimes against humanity. If this is the case then the rebels must also pay their dues before the world court of justice, but what we seem to have here is selective justice where most of the state actors remain protected by official impunity or ommission while the rebels are held accountable.

This takes us to a lesson from history that says that the winners end up writing the historical narrative and punishing the losers. But President Santos: you have not won this war and the rebels are still standing. This is what Timochenko is trying to tell you in his letter. This is his attempt to retake the political initiative.

My guess is that Santos will reconsider his strategy if he wants to stay in the game. He must provide some seriousness in tackling the tough issues of land distribution, meaningful political reform, reforming the military, and revisiting the ruling rentier economic model. None of which the Santos team thus far is willing to negotiate.