This October will mark the 25th anniversary of the battle of Cuito Cuanavale – what Isaac Saney has called “Africa’s Stalingrad” due to its central role in striking a fatal blow against the occupation of South West Africa (now Namibia) and kick-starting negotiations with the African National Congress which would soon put an end to the rule of the racist apartheid system in South Africa.
Tweet
Kevin Edmonds 9/27/2013 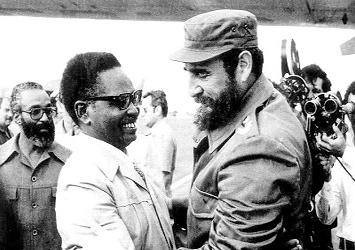 Cuba is rightly known worldwide for its many acts of humanitarian internationalism, exemplified by its numerous medical missions across the world.  However, one of Cuba’s greatest accomplishments has often been neglected in most corners of the mainstream press and academia due to a combination of the ongoing efforts to undermine and marginalize revolutionary Cuba and the ongoing legacy of the Cold War imperialist intervention that has largely influenced our collective understanding of history.

This October will mark the 25th anniversary of the battle of Cuito Cuanavale – what Isaac Saney has called “Africa’s Stalingrad” due to its central role in striking a fatal blow against the occupation of South West Africa (now Namibia) and kick-starting negotiations with the African National Congress which would soon put an end to the rule of the racist apartheid system in South Africa.  Writing from prison, Nelson Mandela stressed that the battle of Cuito Cuanvalae "was the turning point for the liberation of our continent—and of my people—from the scourge of apartheid."

From the eve of Angola’s independence in November 1975, South African Defense Forces, supported by the CIA, sought to assist UNITA (Union for the Total Liberation of Angola) in their attempt to seize power from the revolutionary government of the MLPA (People’s Movement for the Liberation of Angola) by carrying out numerous invasions, incursions and sabotages within Angolan territory.  Given the prospect of potentially “losing” Angola, Secretary of Defense James Schlesinger bluntly proposed that “We might wish to encourage the disintegration of Angola.”  Using Zaire’s (now Congo) Mobutu as a channel for the aid, President Gerald Ford and Secretary of State Henry Kissinger approved Operation IA-FEATURE, which consisted of $40 million in funding and U.S. military trainers which sought to support UNITA and other anti-MPLA groups.

The victory of Angola and Mozambique gaining independence was regarded as a destabilizing force – as the respective revolutionary governments instantly became important allies of anti-apartheid groups operating within South Africa.  Because of this, the apartheid government in South Africa viewed the newly independent countries of Angola and Mozambique as a threat to their hegemony in the region and regarded the United States as a welcome ally.

Responding to the requests of the newly independent Angolan government in 1975, the first contingent of Cuban troops arrived on Angolan soil.  They would be the first of many.  In addition to the deployment of troops and military equipment, Cuban military advice was central in defeating the South Africans at Cuito Cuanavale.

Cutio Cuanavale was a small town in the southeast of Angola located on the Cuito River – but became the site of the most intense fighting during the war. The battle for Cuito Cuanavale lasted roughly six months and at the time was the largest battle on African soil since World War 2.  The fighting took place on both the ground and in the sky, with Cuban pilots taking to the air in combat against the South African air force.  The stakes were so high for the South Africans that it has been revealed that the apartheid government was considering the use of nuclear weapons in an attack against Angola’s capital city of Luanda in order to prevent their own defeat.

Overall, the number of Cuban volunteers (including troops, educators and doctors) who served in Angola from 1975 to 1991 is officially estimated at over 300,000 – 2,000 of which whom lost their lives.

This is primarily the reason why Cuba was the first non-African country visited by Nelson Mandela following his release from prision in 1991.  Later at the 1995 Southern Africa Cuba Solidarity Conference, Mandela remarked that “Cubans came to our region as doctors, teachers, soldiers, agricultural experts, but never as colonizers.  They have shared the same trenches with us in the struggle against colonialism, underdevelopment, and apartheid.  Hundreds of Cubans have given their lives, literally, in a struggle that was, first and foremost, not theirs but ours. As Southern Africans we salute them. We vow never to forget this unparalleled example of selfless internationalism.”

Reflecting on the role of the Cubans in Angola, Ronnie Kasrils remarked that “Those patriots and internationalists were motivated by a single goal—the end of racial rule and genuine African independence.  After thirteen years defending Angolan sovereignty, the Cubans took nothing home except the bones of their fallen and Africa’s gratitude.”