Uruguay has earned a reputation as a democratic country, and the recent passage of laws implementing gay marriage and the legalization of cannabis confirmed its progressive stance. But becoming a top global exporter of iron ore could be a difficult test for this thriving democracy.
Tweet
Luis Manuel Claps
Extractives in Latin America
1/17/2014 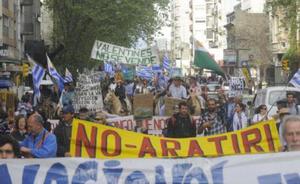 Picked by The Economist as country of the year and celebrated by Nobel Prize winner Mario Vargas Llosa in an El País op-ed, Uruguay is one of the most popular countries these days. Vargas Llosa’s "The Uruguayan Example” (El ejemplo uruguayo), reminds us that "unlike many Latin American countries, Uruguay has a long and strong democratic tradition." New laws legalizing gay marriage and cannabis confirmed its progressive stance. But this rosy image is challenged by the single largest private investment in the country's history. Resistance to a large-scale mining project could show the limits of democracy in Uruguay—or perhaps expand them further.

The Valentines project is proposed by Minera Aratirí, a subsidiary of Indian group Zamin Resources. A 12-page summary of the project posted on Aratirí’s website affirms that, once in operation, the mines would make Uruguay a global exporter of iron ore, the main raw material used in steel for construction and urban infrastructure development. The Valentines project would consist of mines, waste dumps, areas for maneuvering and logistics, a tailings dam, and a processing plant, spread throughout the provinces of Durazno, Florida, Treinta y Tres, Lavalleja, and Rocha. The mining area itself would be located approximately 155 miles from both the coast and from Montevideo. The project’s total output is estimated to be 4-5 billion tons with a total investment of more than US$3 billion. Two 130-mile-long slurry and return water pipelines will be built underground to connect the mines to the port. A deep-water terminal to export the minerals to Asia will receive one large container ship every three days.

In October 2013, thousands rallied in downtown Montevideo to protest against mining development. "They want to dig the open-pit mine in an area with some of the most fertile lands in Latin America" says Víctor Bacchetta, a mining critic with the Movement for a Sustainable Uruguay (Movus). The Associated Press reported that two days before the demonstration, the Department of Lavalleja passed a law prohibiting any kind of open-pit mineral extraction in its territory. According to Rome's Agenzia Fides, the Commission for Life and Water of the Diocese of Tacuarembó helped collect thousands of signatures to stop large scale mining.

According to Montevideo-based news agency Merco Press, President Mujica stated in 2011 that the Valentines mining project will be submitted to a referendum: “I won’t, nor will they (Zamin Ferrous) solve the issue; it’s the people who will decide, and you’ll have to vote.” Also Pier Rossi, National Director of Mining, stated that he is in favor of the referendum. However, Uruguay legalized large-scale mining with the passing of Law 19,126 in September, 2013, and the referendum has not yet been officially announced. "Congress passed a new set of mining rules that regulate large-scale mining projects, imposing significant taxes as well as environmental standards," reported Mining.com. A Senator from the opposition National Party told Tierramérica: “This law has a first and a last name: Aratirí." 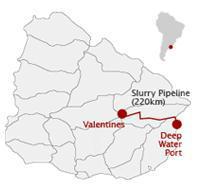 The Uruguay Libre Campaign promotes holding a national referendum on the passage of a constitutional amendment to ban large-scale open-pit mining. They need 260,000 signatures to propose the referendum for a constitutional amendment on Article 47. Ana Filippini, an activist from Uruguay Libre, told El País that "the Government is putting a lot of pressure on the Dinama [the Environmental Authority evaluating Valentines environmental impact study] trying to force approval of Aratirí in January. There is no political will to push for public participation." This pressure proved successful, as El País reported that the government has announced its intention to grant a permit to Minera Aratirí this month.

Conflicts over iron ore development are not new in Uruguay. In 2008, the residents of Colonia Agraciada and Nueva Palmira joined forces to reject the construction of a massive mineral port proposed by multinational mining company Rio Tinto. The journalist and author Eduardo Galeano supported the local groups in their struggle against the new port, which would have loaded iron ore from the British–owned Corumba mine in Brazil and sent the ore down the Paraguay and Parana rivers. The US$205 million project was later canceled for economic reasons after the financial crisis in 2009.

The future of the Minera Aratirí will test the true depth of Uruguay's left. If the social movements that have gained ground throughout the most recent electoral gains can pose a threat to the project, other countries in the region, plagued with mining conflicts, will be following Uruguay's lead once again.