Lessons From a Peace Community and the Political Economy of Conflict

One of the emblemetic organizations resisting violence in Colombia provides insight into deeper truths about the political economy of conflict in the country.
Tweet
Luke Finn
Red Hot Burning Peace
1/28/2014 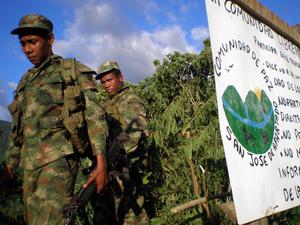 The Comunidad de Paz de San José de Apartadó is located in the mountainous zones that define the borders between the departments of Antioquia and Cordoba, in the region of Urabá, infamous even within Colombia for its violence. It was formed in 1997 along strict internal regulations: not to take any part in the armed conflict, not to pass information to or aid any belligerent groups, not to grow coca; a commitment to engage in communal work, a refusal to take any sort of “reparation” money offered by the Colombian state. There are other Peace Communities in Colombia, but the San Jose community has the highest profile.

In part its emblematic status is due to the level of brutality and hostility it has faced from both paramilitaries and state forces over its 17-year history. It has been subject to repeated massacres, most infamously in 2005, when members of the National Army’s 17th Brigade, together with members of the paramilitary group the AUC (United Self-Defense Forces), murdered and mutilated 3 men, 2 women, an 11-year-old boy, a 6-year-old girl, and a boy of just 18 months. (In the testimony that came out in the later court cases, the Army's reasoning for the murder of the children was that refrain that beats like a drum through human history to justify such atrocities: “they will grow up to be our enemies.”)

In the aftermath, Colombian military officers repeatedly claimed the massacre had been committed by FARC guerrillas to stop people from leaving the Comunidad. They then used false testimonies to back up this claim. Then-President Uribe made the further accusation that the Comunidad de Paz, its leaders and allies (including the organization I work for, that lives with and accompanies the Comunidad), were in fact protecting the FARC and giving them refuge. On December 10th, current President Santos issued a Constitutional Court-ordered apology, but this is scant recompense for the deaths of over 250 community members who have made themselves a target of reactionary forces by making a stand.

Why such hostility toward what is in essence a small farming community attempting to remove itself from violence? What does this hostility reveal about the aggressors and the state of Colombia (in every sense of the word “state”)?

The Comunidad’s refutation of violence as a means to power is at the heart of it. The rule of not aiding in any way any armed actor implicitly connects the violence of the Colombian state with that of illegal armed actors; it reflects the rhetoric of “terrorists” and “criminals” back on the state, proclaiming all violence to be illegitimate. If we follow Weber’s identification of the nation state by its monopoly on “the legitimate use of force” (i.e. a monopoly on violence), then the Comunidad’s stance calls into question the very foundations of the Colombian state. More so, it draws attention to the fact that the Colombian state does not have complete control of its national territory—its struggle to achieve such control has been its defining characteristic since the Colombian Declaration of Independence in 1810.

The internal rules of the Comunidad, whether consciously or not, are a rejection of the basic political economy of a peripheral conflict zone like Urabá, a political economy jealously protected and enforced by those it has raised to power. It rejects the use of violence as a legitimate mode of power; it rejects coca; it embraces communal work as an economic model. It is a representative democracy. It emphasizes localism, self-sustainability, and community organization, connection to the land and rejection of displacement. Its members stand and all to often die on their principals.

Many indigenous cultures of pre-Hispanic Colombia have a dualist worldview, seeing the universe made up of oppositional properties: light and dark, wet and dry, male and female. It is somewhat fitting then, that out of the same valleys, and indeed families, that have produced the Comunidad, this rejection of the political economy of conflict, have also produced the most powerful paramilitary/criminal organization active today in Colombia, if not in the Americas: Los Urabeños. The dark to the Comunidad’s light.

The leader of los Urabeños, Dario Usuga David, alias Otoniel, is from the corregimiento (town) of San José, and shares his second names with many of the Comunidad's leaders. It is an open secret his family finca (farm) is located on the borders of the Comunidad's communal properties. Los Urabeños define and are defined by the conflicts of the political economy: violent, corrupting, materialistic, international, narcotic. Powerful. They exemplify the sea in which the Comunidad attempts to swim, attempts to keep its head above the polluted water of the Golfo de Urabá.

The binary duality of these organizations highlights the eternal struggle in Urabá and Colombia more generally, the geminate conflict between violence and resistance, between colonization and independence. Colombia is a land of contrasts not only in its landscapes or socio-economic inequality, but in its underlying compulsions: recurrent violence coupled with inspirational social movements.