Election Day in the Bolivian Highlands: Local Democracy, Amidst the Contradictions

A report from Bolivia's highland provincial capital of Achacachi, on the elections and the continuing contradictions of Bolivia’s “process of change.” 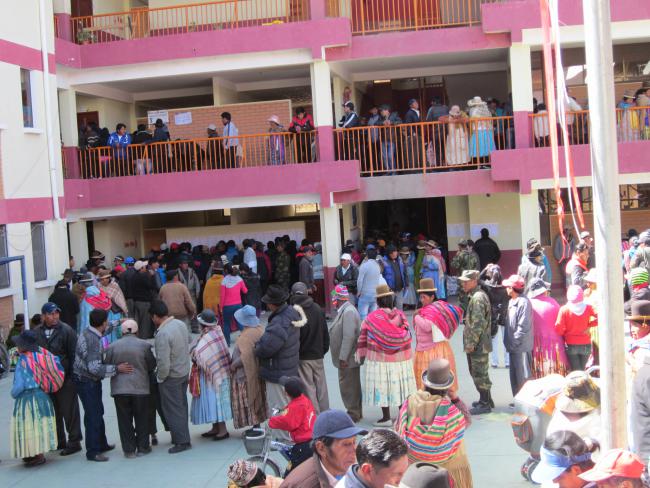 On October 12, Election Day in Bolivia, I traveled to the highland provincial capital of Achacachi—60 miles north of La Paz, and 12,600 feet above sea level—as an official observer with the National Lawyers Guild. From this traditional bastion of support for President Evo Morales and his ruling Movement Towards Socialism (MAS) party, we gained a unique view of the elections and their potential impact on what Bolivians call their “process of change,” including its many contradictions.

Steeped in the lore of Aymara insurgency, Achacachi is famously known as the epicenter of Túpac Katari’s 18th century indigenous revolt against Spanish colonial rule and the birthplace of the 1970s EGTK Katarista guerrilla army—which included among its members Bolivia’s current vice president, Alvaro García Linera. It is also the home of the legendary Ponchos Rojos (Red Ponchos), an indigenous peasant militia that confronted Bolivian troops during the 2003 Gas Wars and continues to play a key role in highland communities.

In the La Paz department where Achacachi is located, Morales prevailed with 69% of the vote, boosting his 61% total nationwide.  In the congressional district that includes Achacachi, the MAS candidate won 78% of the vote, contributing to the party’s two-thirds “super-majority” in the Plurinational Legislative Assembly and its increasingly hegemonic control over Bolivian politics. 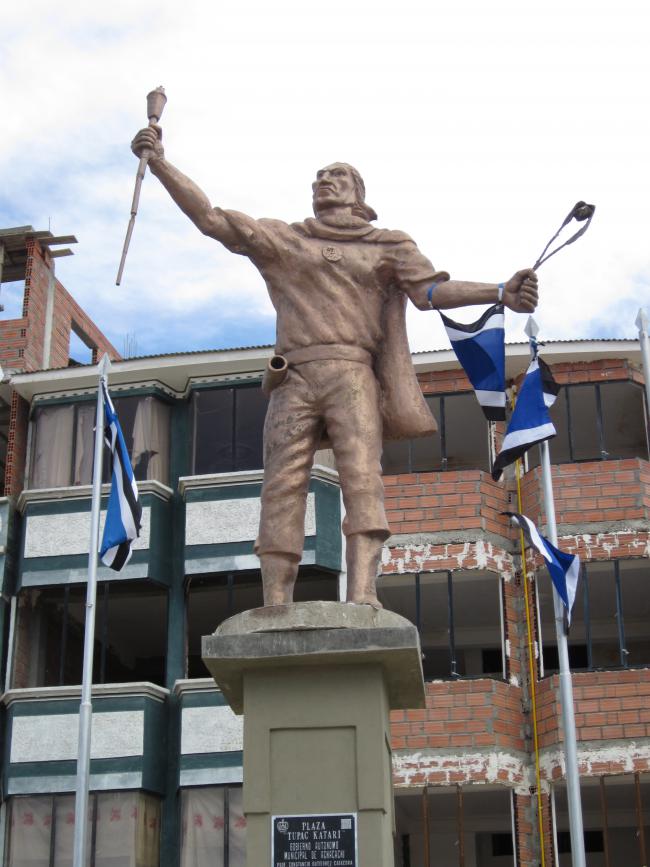 Election Day in Achacachi, as elsewhere in Bolivia, looked a lot different than in the United States. For starters, it was a national holiday (and a Sunday), with all regular business shut down to encourage voter turnout.

Voting is compulsory—with non-excused abstention punishable by a hefty fine—as well as highly participatory. To encourage unbiased reflection, campaigning is prohibited for 72 hours ahead of the election, and the consumption of alcoholic beverages is outlawed for 48 hours.

With a ban on motorized transportation and domestic flights—designed to prevent double voting, especially by those who maintain dual residency in the city and in the campo—La Paz and other major cities experienced a mass exodus on Saturday as many returned to vote in their rural communities of origin. At dawn on Sunday, the road to Achacachi was eerily devoid of vehicles, but clogged with groups of pedestrians and bicyclists, some traveling for several hours to reach their voting destinations. While the advent of Bolivia’s national biometric voting registry (which includes voters’ photos and fingerprints) would seem to make such onerous travel restrictions unnecessary, most voters appeared to take them in stride.

In many respects, Election Day in Achacachi—run by the Supreme Electoral Tribunal (TSE), whose members are appointed by the MAS-controlled Congress and the President—was a model of local democracy in action. A panel of 3 to 6 citizen jurors, randomly selected from the local voting registry, oversaw the voting process and publicly counted the votes at each table. Service on the electoral jury panel is open to all voters and is obligatory, unless the voter has a good excuse (not including illiteracy, although two-thirds of the members of each panel must be literate and non-elderly).

Thanks to the new Constitutional mandate for gender parity in the electoral system, women appeared to be equally represented on Achacachi’s jury panels, with many carrying babies on their backs in Bolivia’s ubiquitous aguayos. In this election, women gained an unprecedented 48% of the seats in the Plurinational Assembly, placing Bolivia in the vanguard among Latin American countries.

Still, women are a long way from achieving real equality and security in Bolivia. Despite a law passed last year making femicide a crime punishable by 30 years in prison, Bolivia has one of the highest rates of violence against women in Latin America. So far this year, 155 women have been murdered.

The elections spawned a new feminist movement, Machista Fuera de la Lista! (“male chauvinists off the ballot!”), that forced 2 candidates accused of domestic violence—including one would-be MAS senator—to withdraw from the campaign. After the election, Morales issued a decree authorizing the operation of safe houses for domestic violence victims, to be financed by hydrocarbons revenues redistributed to the departments. 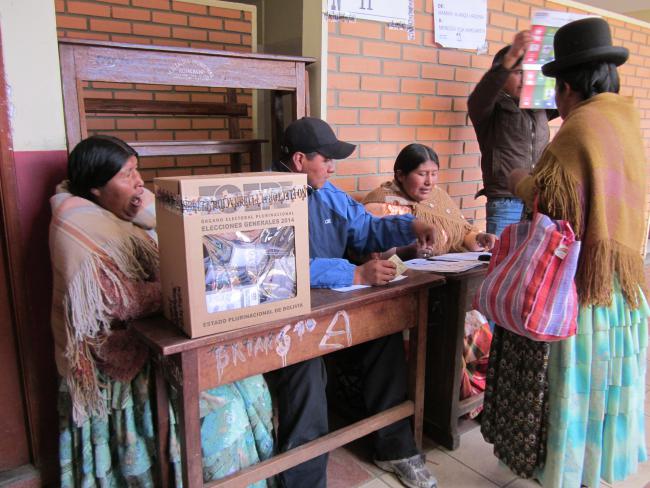 The elections also served to highlight contradictions between the ideals of Western representative democracy and the communitarian decision-making traditions that remain entrenched among peasant unions in the Andean highlands. When the Ponchos Rojos publicly threatened to “whip” opposition candidates, and decreed that voters must vote “in line” for the MAS presidential and congressional ticket, according to the consensus of their community assemblies, the TSE was quick to respond that voter coercion is a criminal offense.

This did not prevent some western media outlets from misrepresenting and maligning the Bolivian voting process. For example, the Washington Post initially reported that “in some traditional highland communities, villagers vote collectively and in public, with no dissenting ballots allowed, often delivering 100 percent margins for Morales.” (The statement was criticized and later retracted, without explanation.)

The reality, we learned from talking to Bolivian experts, is more complex. According to Dr. Liberio Uño, who teaches in the new community justice program at the University of San Andres, most rural communities have learned to reconcile individual and collective decision-making principles when it comes to elections, and most voters understand their right to a secret ballot. Still, according to anthropologist Xavier Albó, the tradition of linear party voting in the campo, encouraged by the ruling party, dates back to the 1952 Revolution. While retaliatory threats from peasant leaders are mostly rhetorical, he argues, punitive measures against individuals or communities that engage in “cross-voting” can take a variety of subtle forms, and are extremely difficult to police.

In Achacachi, we were surprised at the virtual absence of official MAS observers at the voting tables, although identifiable party militants (wearing inside-out party hats and jackets over MAS T-shirts, which are not permitted to be displayed in the voting centers) congregated in the courtyards for much of the day. Whether or not their presence was intimidating, Achacachi voters had plenty of reasons to support the Morales government.  These include a recent seed distribution program for local farmers, a new sports stadium, hospital and school, and domestic gas connections visibly in progress—among the 400,000 installed throughout the country by Morales since 2006 (with a goal of one million by 2020). In nearby Warisata, the new Túpac Katari Aymara University is one of three indigenous universities funded by a special tax on gas profits. 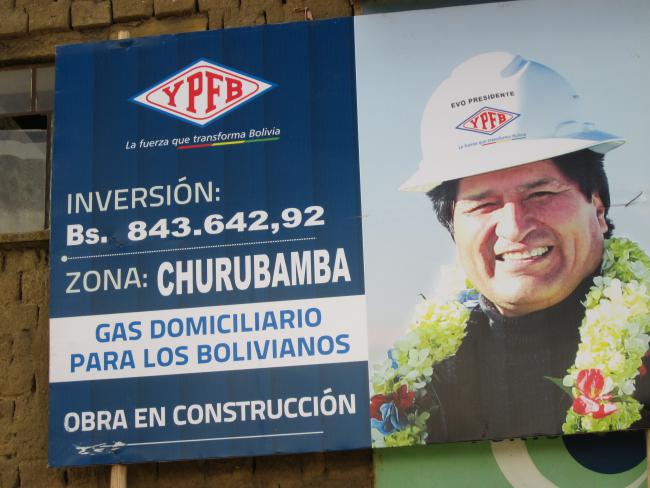 Still, the TSE vote count reveals that more than 30% of voters in the Congressional district that includes Achacachi cast a blank vote for deputy, instead of voting “in line” for the MAS as instructed by the Ponchos Rojos (or for any other candidate). By comparison, only 1.5% of voters in the region failed to indicate a presidential choice. A similar pattern can be seen throughout the La Paz department’s rural districts.

Albó interprets this result as a form of protest—not quite a split ticket, but evidence of a residual voter reluctance to grant the MAS a blank check across the board. The same spirit was evident in the 2010 municipal elections—where, for example, the MAS mayoral candidate in Achacachi placed third, due to local resentment against an unpopular nominee imposed by the party leadership. This resurgence of local autonomy may be a harbinger of greater challenges ahead for the MAS in the upcoming (March 2015) municipal and gubernatorial elections.

In other respects, too, the election results highlight contradictions that call into question the future direction of the “process of change” for communities like Achacachi. While the MAS victory in eight of nine departments has led Morales to proclaim an end to the media luna (the “half-moon” comprising the formerly oppositional eastern departments) and its replacement by the luna llena (full moon) of a “united Bolivia,” the political defeat of the right may have come at a cost—since it has occurred, in part, through the incorporation of significant right-wing elements under the MAS umbrella, including members of the Santa Cruz agribusiness and ranching elites and ex-leaders of the old conservative neoliberal parties.

A more centrist policy drift within the MAS could mean more government concessions to large-scale agricultural and timber interests, and a further slowdown of land reform, at the expense of lowland indigenous groups and highland peasant farmers (such as those in Achacachi). Indeed, the shifting geopolitical base of MAS support can be seen in the regional presidential vote over time. According to a preliminary analysis by the Bolivian Information Forum, while Morales’s percentages increased between 2009 and 2014 in each of the four eastern departments (plus Chuquisaca), they declined in each of the four western departments (La Paz, Oruro, Potosí, and Cochabamba), the traditional bastions of MAS support.

Finally, the Morales government’s growing reliance on extractive industries to finance the popular economic and social programs that brought about its massive electoral victory, in Achacachi and elsewhere poses a continuing contradiction for the process of change. The apparent revival of the controversial TIPNIS highway plan, the expansion of hydrocarbons exploration to the national parks, and the enactment of a mining law that permits water to be diverted from local farming communities to mining operators have highlighted the growing cost of these policies to the environment and indigenous groups. They have also continued to widen the rift between the MAS and critics of extractivism, who are accused of obstructing the process of change and increasingly subject to marginalization, repression, and organizational intervention by the government.

More than the October 12 Morales/ MAS electoral victory, it is these ongoing struggles and contradictions—over local democracy, true gender equality, environmental protection, and the rights of indigenous and peasant communities—that will continue to shape Bolivia in the years to come.