Despite the trauma of family separation, current immigration policy leaves out parents whose children can legally stay in the United States. 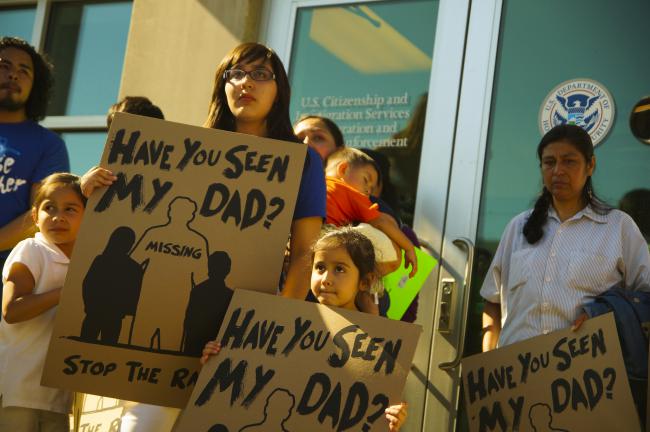 In the 1990s a boy’s father was laid off from a copper mine in Mexico. (I will call the boy David out of respect for his privacy.) David and his family left Mexico for Tucson, Arizona, where they overstayed their tourist visas. They were all undocumented until 2012. Then, in 2012, President Obama issued Deferred Action for Childhood Arrivals (DACA), a policy that allows for undocumented young adults who crossed with their parents as kids to defer removal action for a certain period. It gave David and his brother work permission and relief from deportation for two years at a time. Their mom and dad, however, were still subject to deportation.

The United States is home to thousands of families in a similar situation. Immigration law continues to dismantle families, placing young adults like David in jeopardy. “About 200,000 parents of children who are American citizens were deported between 2010 and 2012,” Sonia Nazaria cited in the New York Times in October 2013. That number does not include parents of DACA recipients.

Last spring, Congress couldn’t pass immigration reform. President Obama promised in June “to fix as much of our immigration system as [he could] on [his] own.” Followed by remarks that perhaps “families would get to stay together.” On September 7, however, he delayed his promise until after the November elections. If he does act, he could expand DACA to include undocumented parents.

I met David in March 2013 in Tucson, Arizona, at BorderLinks, a nonprofit educational organization focusing on border issues where I work. David often volunteers to share his family's immigration story with BorderLinks participants. Now 19, David wishes he could give his DACA status to his parents. They need lawful status more than he does because they have to provide for their family, David said to me in an interview.

On a typical December morning in 2013, David’s mom made him a full breakfast before he left to take his last exam at Pima Community College. She then went out to run errands. Other than David’s exam, there was nothing that set this day apart from the 11 years that they have lived in Tucson.

Later, while at the movies with his girlfriend to celebrate the end of the semester, David’s girlfriend received an urgent text telling him to call his brother. Upon leaving the theater, his brother told him that their mom was being detained at the Border Patrol station.

David and his girlfriend rushed home to find out that the Tucson police stopped David’s mom’s car because of alleged smoke discharging from the exhaust pipe. Once the car was towed, his mom went to a nearby fast food restaurant for a cup of coffee. Minutes later, David told me, two ICE agents came and took her away.

The guards escorted their mom out of her cell and into the visitation room. When she saw her sons she began to cry behind the glass.

“They treat the parents as criminals,” David told me. “Legislators focus on the students. ‘Let’s give the DREAMers this!’” he said, imitating legislators. “But they often forget about the parents.”

‘DREAMers’ are those who qualify for the Development, Relief and Education for Alien Minors Act (DREAM Act). It would have created conditional pathways to citizenship for undocumented high school graduates going to college or enlisting in the military. In light of its stalled failure, Obama issued DACA.

David, however, doesn’t claim the term ‘DREAMer’ for himself. “Our parents are the ones who had the dream of coming over and providing a better life,” he said. They sacrificed a tremendous amount by leaving their families, language, and culture to do so, he explained. “They can’t really work. They can’t get a drivers license. They can’t get healthcare. They can’t really do anything. Yet they had the guts to just make that decision and come over. And they work every day for their kids,” he said.

While some form of  a “deferred action” executive order for adults would be a temporary improvement, it would still not give them the rights of citizens or even residents, as it does not grant lawful status.

In the absence of lawful status, those who benefit from deferred action face unequal treatment from state to state. For example, Arizona Governor Jan Brewer (R) is fighting in court to continue her ban on Arizona driver’s licenses for DACA recipients. While Brewer is not seeking another term, candidate Doug Ducy (R) says he will continue her ban, and candidate Fred DuVal (D) says he will not. Meanwhile, neighboring states, California and New Mexico, do allow DACA recipients to drive.

Currently, David’s mom is fighting her deportation case while out on bail. In the meantime, a future traffic stop for her husband or her possible deportation threaten to dismantle the very family support system she and her husband risked migrating here to create.

The stalled DREAM Act legislation left parents out, and DACA does the same. Undocumented families like David’s will have to wait and see if Obama’s promised executive action will give them relief.

Alex Devoid is a dual masters student in journalism and Latin American studies at the University of Arizona. He is also a United Methodist Young Adult Missionary Alumni having worked in Nicaragua at Acción Médica Cristiana for 18 months and in Tucson, Arizona, at BorderLinks for 18 months where he currently works part time.