How Canada and Mexico Have Become Part of the U.S. Policing Regime

The United States is enforcing its economic borders over its geographic ones. 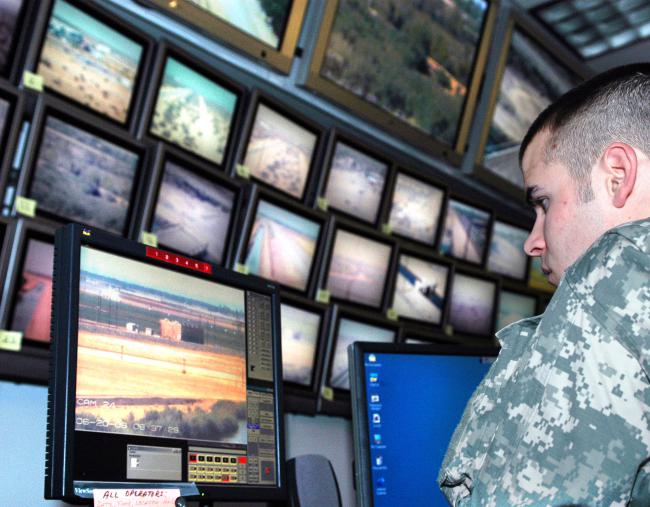 During this summer’s child migrant crisis and the accompanying frenzy around “security” along the U.S.-Mexico boundary, a spotlight was shone on Mexico’s role in protecting the U.S. “homeland.” It helped illuminate what Washington considers the United States’ territorial boundaries: those of the countries associated with the North American Free Trade Agreement (NAFTA). In other words, the territories of Canada and Mexico are part of the U.S. policing regime, under a regional security framework we might call “NAFTA-land Security.”

Evidence of this emerged in July when a Congressional hearing featured a discussion on, as Senator Tom Coburn (R-OK) put it, “what Mexico is actually doing to help us” regarding the unauthorized movement of Central American children. Some lawmakers and officials hinted that insufficient efforts by Mexican authorities made possible the unwanted migrants’ northward movement through Mexico.

In response, administration officials pointed to Mexican President Peña Nieto’s new southern border strategy, one that, as Todd Miller has written, involves the exportation of the U.S. border policing model to Mexico.

The current focus on Mexico’s border with Guatemala and Belize is at once a long-developing story and part of a much larger policy agenda. Partly in response to the terrorist attacks of 9/11, partly the result of security compunctions deepened through the advancement of economic interests by way of North American economic integration, the United States has sought to improve the Mexican state’s policing capacities. In doing so, Washington aims to shape those capacities toward U.S. concerns in order to ensure Mexico’s political economic stability, to better protect the U.S. homeland through “layered defense,” and, in turn, to insulate the highly integrated and strategically crucial North American economic space from internal and external threats.

As Laura Carlsen and I have argued, this aim has underpinned the over $2 billion provided to Mexico under the Mérida Initiative. Ostensibly a counternarcotics aid package, Mérida has in fact been a vehicle for an expansive regional security effort, with roots in the now-defunct Security and Prosperity Partnership (SPP) and other plans for augmenting U.S. and North American security emerging out of 9/11.

Amongst varied goals within the Initiative (a central one being the mitigation of destabilizing drug violence), exporting Homeland Security concepts and approaches to Mexico remains key. This includes increasing the Mexican state’s capacity and willingness to interdict “illicit traffic” at its southern border and to be better able to track and trace movements throughout its territory.

While drugs and terrorists are supposed to be Mérida’s primary targets, the emerging strategy has enveloped ordinary people escaping drug-related violence and/or seeking economic opportunity. As a recent Washington Office on Latin America (WOLA) report attested, it has also had manifest effects at Mexico’s southern border and throughout its territory via a build-up of security forces dedicated to apprehension, and the continued threat of abuse of migrants by those forces. In the wake of this past summer’s crisis, Mexico has cracked down on those moving through its territory to the United States, increasing deportations and pulling people from trains, buses, and hotels.

The southern border of Mexico has long been a site of U.S. interest, not least during the wars in Central America in the 1980s when refugees from Guatemala and El Salvador headed to the United States through Mexico. Cables accessed by the whistle-blower Chelsea Manning and released by the WikiLeaks organization show that it has taken on a new significance in the post 9/11 era. In December 2004, a cable discussed U.S. Congressional research into a new “North American security architecture,” and the relevance therefore of the unwanted “openness of Mexico’s southern border.”

In the cable Guatemala is described as a potential “buffer” between Central and South America and the “NAFTA space,” a position that would allow it to help improve U.S. security. Large numbers of cables from the U.S. Embassy in Mexico refer to the “porosity” of the southern border and contend that “securing this border is of vital importance to U.S. security.” A regional, NAFTA-based security framework that would treat this border as a perimeter for North America was the underlying aim of the Security and Prosperity Partnership (SPP). It was into this wider context that the Mérida Initiative emerged in 2007. The Initiative in fact puts into practice many of the priorities of the SPP.

U.S. officials themselves have explained clearly these overall goals represented within Mérida. One of the “four pillars” of the Initiative under Obama is the creation of “21st Century borders.” The aim is to facilitate the movement of the good stuff (trade in legal items) while keeping out the bad (drugs, guns, illicit cash, terrorists, and, it would seem, desperate people). The 21st Century border is not just envisioned between the United States and Mexico (and the United States and Canada), but at NAFTA’s perimeter.

The exportation of Homeland Security concepts, and the projection of U.S. security in line with the 9/11’s Commission’s claims that the “American homeland is the planet,” is a manifestation of a wider trope in U.S. foreign policy. However, within North America, distinct, deeper logics of security integration exist. The Department of Defense (DoD), through its Operational Command USNORTHCOM, states that its major “Prioritized Strategic End State” is one whereby “allies and partners actively contribute to the cooperative defense of North America.” In this regard, the DoD continues, “USNORTHCOM's Top Theater Security Cooperation Priority is Mexico.”

Moreover, as NORTHCOM strategist Biff Baker stated in a journal article in 2007, “From a bilateral perspective the North American economy and related critical infrastructure is a shared center of gravity that must be defended to preserve our ways of life.” In practical terms this has meant both using the issue of drugs to open Mexican security forces to U.S. influence, and encouraging the Mexican government to take “the gloves off” with regard to Mexico’s cartels.

It has also meant treating NAFTA’s borders as the security perimeter of a distinct political economic space. In a clear indication of this thinking, Allan Bersin, the Department of Homeland Security’s chief international advisor, asserted in 2012 that “the Guatemalan border with Chiapas, Mexico, is now our southern border.” As the WOLA report makes clear, this wider focus is now visible at the southern border zone.

This reflects a binational, multi-agency approach. The Pentagon reports that it has aided Mexican marines (outside of Mérida funding channels) who are now positioned on the Mexican side of NAFTA's buffer zone. U.S. officials have also asserted that, as part of the Mérida Initiative, Blackhawk helicopters are available to assist the Mexican navy's border mission.

This is where things become complicated and troubling. The Mexican military is not legally mandated to apprehend migrants (the DoD states that the Mexican navy’s mission at the border is to intercept “transnational criminal organizations,” the preferred officialese for cartels), but WOLA found that it was in fact engaging migrants and that abuses were occurring.

More broadly though, the entire NAFTA-land Security project and attendant spread of the U.S. Homeland Security model is deeply militarized in its approach. In terms of human security, it is palpably failing. Not only are Mexican citizens dying in the tens of thousands in the continued drug war—which involves corrupt state institutions allied with the cartels—but life for people on the move into and through Mexico—in large part to escape worse drug violence and economic stagnation in their own Central American countries­—is staggeringly brutish.

The persistent criminalization of migrants has helped create a situation in which they are vulnerable to abuse by both agents of the state and criminal gangs (often one and the same). NAFTA-land Security, it seems, does not extend to the ordinary person within its perimeters.

Paul Ashby is a PhD candidate in International Relations at the University of Kent in the UK. His research focuses on the Mérida Initiative, Mexico’s security crisis, and U.S. attempts to further integrate North America’s political economy and security apparatus. He has taught courses on ethics and international relations (IR), IR theory, and the UN system. Follow him on Twitter at @pash84.