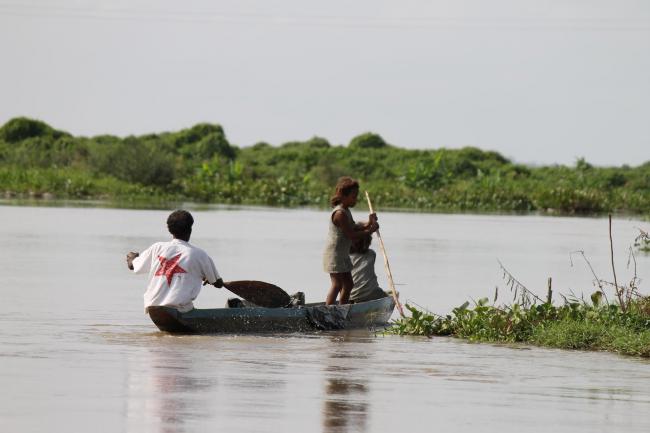 Latin America stands out as one of the regions where the deterioration of water resources is more dramatic than in other parts of the world. According to a recent study, this critical environmental situation is directly connected to an increase in population pressure on a global scale. The experience of the people who face the deterioration of water resources in their everyday life, however, cannot be measured solely by population growth. For thousands of families whose livelihoods depend on aquatic resources, the deterioration of wetlands and rivers constitutes a form of water grabbing associated with the expansion of large-scale predatory economies such as mining and large-scale agriculture. Fundamentally, water grabbing reflects the ways in which different views and meanings of water collide.

Water grabbing is the process in which powerful actors (often, but not always international) take control of bodies of water by diverting, draining, contaminating, or enclosing wetlands, rivers, and even the ocean. Contemporary development often depends on water grabbing for projects such as highway construction, large-scale dam building, monocultures, and mining.

In Argentina, for instance, the enclosure of wetlands to the expansion of agri-business has caused the deterioration of aquatic ecosystems and rural livelihoods. On October 13, 2012, the Families of Small Producers of Gallo Sapukay, in Mercedes, sent a letter to President Cristina Fernández de Kirchner denouncing the Saanto Ignacio S.A. firm, which bought and fenced large swaths of wetlands where they used to work and live. Furthermore, the Families made public the fact that employees of the firm had threatened them, and that it was illegal to build an embankment that would have disastrous effects in the hydrological processes of the wetland complex.

The Families insisted upon their right to work and live in the disputed area, and expressed fears of experiencing a similar situation to one that occurred in the nearby area of Yahaveré, where the firm Forestal Andina—which later became Hacienda San Eugenio S.A. and was involved in other environmental conflicts such as the illegal use of lands pertaining to a natural reserve—fenced a large area of wetlands and built an embankment to introduce large-scale cattle ranching in the area.

In Chile, the expansion of large-scale extractive industries that has led to the deterioration and eventual disappearance of vast swaths of wetlands  has been one of the main drivers of water grabbing. That has been the case of the Aymara community of Cancosa in Northern Chile, which has long suffered the devastating effects of the operations of BHP Billiton on their wetlands. BHP Billiton is a multinational company predominantly involved in copper mining. In Cancosa, this company has extracted copper for more than two decades and, in so doing, it has destroyed many wetlands and wells. By destroying wetlands, BHP Billiton triggered a process of dispossession in the Aymara community of Cancosa: more than 90% of the Aymara families were forced to leave their community because of the deterioration of water resources. As a response to this form of dispossession, the Aymara people filed two lawsuits in 2006 and 2007 against BHP Billiton demanding redress of the environmental and social damages it produced.

Even though little has been achieved thus far in the environmental cases against of BHP Billiton, the mobilization of the Aymara people account for a growing wave of resistance against water grabbing throughout Latin America.

Unlike the Aymara case, however, other groups have mobilized (even pre-emptively) before extractive industries take hold. In 2012, People from Corral de Piedra, Costa Rica, lodged a complaint against Holcim—one of the world’s largest cement companies. According to this complaint, Holcim had purchased a swath of land including a very important wetland. People from Corral de Piedra opposed the arrival of Holcim, concluding that it would pose an imminent threat to the aquatic ecosystems and the environmental sustainability of the area.

Yet the struggle against the insidious connection between the deterioration of water resources and development is not only a struggle against private companies, but also against the state, which has also been an important actor in the production of different forms of water grabbing. This is particularly clear, for example, in the intensification of water grabbing in Northern Peru, where a number of Peruvian activists and organizations have called attention to the disastrous effects of mining operations on The Virrilá Estuary, the San Pedro mangroves, and the Ramón and Ñapique lagoons in the lower Piura river basin.

The Piura river basin is the habitat of numerous species and fishing communities, but it is also becoming the home of international mining companies. Local authorities and people have suggested the creation of a community conservation area of about 54,000 hectares as a way to protect aquatic ecosystems and artisanal fishing from the effects of mining. Yet almost 82% of the proposed area overlaps with seventeen mining concessions granted by the Peruvian state.

The problem of water grabbing in Latin America, however, cannot be explained exclusively as a problem of the permissiveness of the state, or as the consequence of the expansion of market-oriented economies. Urbanization and contamination are also important drivers of the dispossession of people from their water resources. Yet at the center of the problem of water grabbing is a collision of mutually exclusive conceptions around the meanings of wetlands, rivers, and more generally water.

For private companies such as BHP Billiton or Santo Ignacio S.A., water is nothing more than a resource that may or may not be necessary for the expansion of industry. For the fishing communities of Northern Peru, or the Aymara people of Cancosa, water is vital to their habitat, livelihoods, and socio-economic reproduction. When these two opposing visions converge, unequal power relations translate into conflicts, struggles, and environmental deterioration.

The Ramsar Convention—an intergovernmental treaty for the conservation and wise use of wetlands—globally popularized another dominant conception of wetlands. According to the Ramsar Convention, wetlands are ecosystems with important environmental properties for the reproduction of human and non-human species. In fact, many wetlands threatened by the expansion of extractive industries are currently Ramsar sites, which enhance their importance in global ecological terms.

Yet this idea of wetlands as ecosystems is very recent, at least in public policy scenarios. For a long time, wetlands were dismissed as undesirable places where diseases flourished and mosquitoes reproduced. As a consequence of this perception, wetlands were seen as obstacles to development and therefore their drainage was, to some extent, a necessity. In the name of progress, thousands of families were in this way dispossessed of their aquatic habitats.

Despite the fact that all the Latin American countries adopted the Ramsar convention, the idea of wetlands as wastelands and obstacles to development seems to be more powerful. The struggle of Aymara people, fishing communities, and environmentalists is therefore a struggle against the powerful and devastating effects of that conception. These struggles call for awareness that wetlands and rivers are not only sources of water for different purposes; they are also habitat for humans and non-human organisms whose lives depends on aquatic environments.

Finally, given the growing concern about the intensification of land grabbing on a global scale mainly for the spread of large-scale agriculture, the increasing expansion of different forms of water grabbing throughout the global South calls for a more integrative approach to the problem of resource dispossession at large. This is so in part because land and water remain to be seen as separate worlds, but the cases of water grabbing presented here are at the same time instances of land grabbing. This integrative approach also needs to consider the relationship between land and water beyond their material uses to include their cultural and symbolic dimensions. From this perspective, water grabbing is not only a problem of material and economic dispossession, but also a question of cultural disruption.

Alejandro Camargo is a Ph.D. candidate in geography at Syracuse University, and an external researcher at the Colombian Institute of Anthropology and History. Email him at alejandro.camargo@gmail.com or follow at @camargh2o.