Bolivia Revolutionizes Urban Mass Transit: From the Streets to the Sky

How a spectacular urban cable car system and a new municipal bus program are revolutionizing mass transit in La Paz and El Alto, with the help of some political competition. 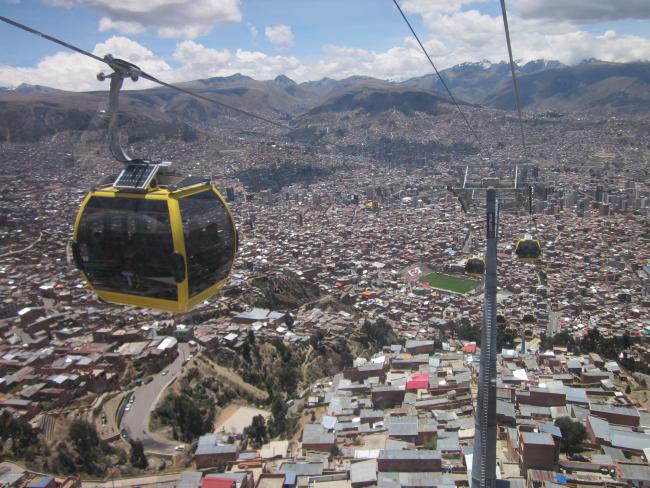 Those searching for revolution in Bolivia may find it in unexpected places. On the streets and in the sky above La Paz, the nation’s capital, and the neighboring indigenous city of El Alto, a genuine transformation of the urban public transportation system is taking shape, against the backdrop of a political competition that is working to the benefit of local residents.

On December 4, President Evo Morales inaugurated the third line of Mi Teleférico (My Cable Car), the spectacular new cable car system launched last May between La Paz and El Alto. With its Red, Yellow, and Green Lines (the colors of the Bolivian flag), 11 stations, and 427 gondola cabins spanning more than 6 miles at 13,500 feet, it is the longest and highest urban cable car system in the world.

Around 100,000 passengers each day—more than 1 out of every 5 commuters between the two cities—are now riding the teleférico to work or school, to buy or sell goods in the local market, or to enjoy family leisure or tourist activities in one location or the other. Compared to the grueling, unpredictable journey in a packed taxi, minivan, or microbus that is the customary mode of local transit, the popular teleférico offers a quick hop in the sky between sleek, modern terminals, with spectacular vistas along the way and free internet at the stations. While the fare of 3 bolivianos (43c) costs more than a minivan ride, passengers who are elderly, disabled, or students pay only half, and the commute takes less than 20 minutes instead of the usual hour.

Morales points to the teleférico as a showpiece of Bolivia’s modernization, made possible by the past nine years of economic prosperity and political stability under his MAS (Movement Towards Socialism) government. It is also being touted as a symbol of integration, breaking down social, economic, and geographic barriers by connecting distant neighborhoods of indigenous migrants to the city’s commercial center, while opening up opportunities for tourism and investment flows to El Alto. As a political project, the teleférico epitomizes the campaign themes of progress, development, technological advancement, and national unity that propelled Morales and the MAS to an overwhelming victory last October.

While the cable system was constructed by the Austrian firm Doppelmayr—one of a handful of companies in the world with the necessary technical expertise—it is also very much a domestic initiative. The $235 million project cost has been financed entirely by Bolivia, with funds amassed largely from hydrocarbons revenues (taxes and royalties) accruing to the government. The construction workforce is largely Bolivian, and Bolivian engineers and technicians are being trained to operate the system.

The teleférico’s capital cost is expected to be amortized in 25 years—earlier than originally anticipated—through a combination of passenger revenues (75%) and commercial income (25%) generated from retail space and billboard rentals at the stations. (Fortunately, no commercial advertising is permitted on the cable cars, which are decorated instead with messages about important Bolivian laws, and, occasionally, with civic symbols such as soccer balls.) While experts remain skeptical, since virtually no public transit system in the world operates in the black, Morales has predicted that profits from the teleférico will soon be used to subsidize the government’s cash transfer programs.

Morales has pledged another $450 million to construct 5 more teleférico lines starting next year, more than doubling the range of the system. Unlike cable cars built in cities like Caracas and Medellin, which reach only a few isolated hilltop neighborhoods, the La Paz/ El Alto teleférico is uniquely envisaged as the core of an urban mass transit system—a “subway in the sky,” as The New York Times has dubbed it. Austrian president Heinz Fisher will travel to Bolivia to sign the new contract on January 22, the day Morales is sworn in for his third presidential term.

Equally popular in La Paz is the new municipal bus system, PumaKatari, (named for the cougar and serpent that symbolize strength and cleverness in Andean culture). Designed to serve the city’s remote and neglected hillside neighborhoods, the system is especially welcomed by poorer residents who live farthest from the center, and are often denied service or charged extra by taxi and minivan drivers. In some cases, angry residents have mobilized to demand the expulsion of minivan lines that provide poor service to their neighborhoods. The municipal buses, with fares of 28c during the day and 43c at night, may cost a little more than prevailing modes of transportation, but offer the same half-price discounts as the teleférico and the convenience and reliability of fixed stops, schedules, and routes.

PumaKatari is the brainchild of Luis Revilla, the popular La Paz mayor elected in 2010 on the left-center MSM (Movement Without Fear) ticket. Revilla supports the teleférico, but insists that it must be part of, and coordinated with, an integrated mass transit system for the La Paz metropolitan region that is efficient, safe, convenient, and meets residents’ needs.

The first phase of PumaKatari was launched in February 2014—just before the teleférico—with 3 routes and 61 buses manufactured by King Long Motors of China. Four new routes and 73 buses have been commissioned for early 2015, with another 4 routes and 60 buses to follow later in the year. The total $30 million capital cost, along with an initial $4 million operating subsidy, is being financed by the municipality, which in turn receives most of its funds from national sources (principally hydrocarbons revenues).

With Bolivia’s departmental and municipal elections scheduled for next March, transportation politics have become a major battleground in the hotly-contested La Paz mayoralty race. Revilla, forced to form a new party when the MSM was decertified after its poor showing in the national elections, collected more than 50,000 signatures in a week to secure standing for the new Sol.bo (Sovereignty and Liberty) ticket.

Sol.bo has since acquired many adherents, especially among MAS dissidents such as former defense minister Cecilia Chacón and TIPNIS leader (and ex-presidential candidate) Fernando Vargas. The party is now organizing a slate of candidates to run for positions throughout the La Paz department, including ex-MAS education minister Félix Patzi for governor.

With Revilla now being mentioned as a potential future rival to Morales, the mayoral campaign and its related transportation issues have become even more competitive and contentious. At the recent official ceremony inaugurating the teleférico’s new Green Line, Revilla was snubbed in favor of La Paz city councilor Guillermo Mendoza, who is also the new MAS candidate for mayor. (Initially, the head of the state cable car company, César Dockweiler, was widely rumored to be in line to run for MAS.)

Tensions have also arisen over the selection of an interim mayor to replace Revilla, who is legally required to resign by the end of the year in order to run again in March. Revilla has expressed concern that the confirmed designee, a MAS-allied city councilor who recently voted against expanding the PumaKatari bus project (for reasons of cost), could work to undermine his transportation initiatives over the next several months.

Still, there are growing signs of inter-jurisdictional cooperation and coordination around transportation planning in the region. Teleférico stations are being coordinated with PumaKatari bus stops, and the first integrated transfer location was established with the new Green Line in December. The municipalities of La Paz and El Alto have signed an agreement to cooperate in implementing a regional mass transit system, and now meet regularly with representatives of the state cable car company as well as the Ministry of Public Works. El Alto’s counterpart to PumaKatari, the new municipal bus Sariri, is scheduled to start operations early next year, with two routes feeding directly into the teleférico.

The Morales government has also taken critical steps to contain opposition by the powerful MAS-allied transportista (taxi- and minivan-drivers) unions which have threatened to derail both the teleférico and municipal bus initiatives. Morales has guaranteed a $100 million loan from China to enable the La Paz and El Alto unions to purchase 2,000 modern vehicles from King Long Motors (the same company that manufactures the PumaKatari buses). The upgraded fleet will run on natural gas, eliminating the cost of federal gasoline subsidies. Additionally, the government will buy up the old minivans for scrap, and the unions will use the proceeds as a downpayment on China’s loan.

So far, Bolivia’s competitive urban transportation politics seem to be working to everyone’s advantage, and especially to the benefit of La Paz and El Alto residents. Having the resources from hydrocarbons revenues for major national and local projects certainly helps. Meanwhile, showcasing its shiny new cable cars and buses, La Paz has just been named one of the “seven most amazing cities in the world.”