Autodefensas Gain Legitimacy Where the Mexican State Has None

That groups of armed peasants are more successful in controlling organized crime than the state should be a terrible embarrassment and public relations disaster for the government of Enrique Peña Nieto.
Tweet
Peter Watt
Mexico, Bewildered and Contested
2/20/2014 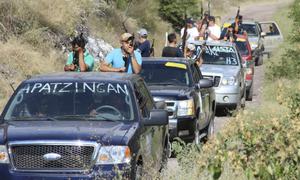 Vigilante groups in Michoacán now claim up to 20,000 members, and have successfully wrested control of several towns, like Nueva Italia and Apatzingán, from the brutal Caballeros Templarios (Knights Templar) cartel. The Templarios have grown massively in the last few years, capitalizing on the economic instability and corruption which characterize the state’s economy and politics.

Michoacán is the jewel of Mexico’s narco-capitalism; its Pacific port receives the raw materials for manufacturing methamphetamine, for example. And it is rich in agricultural land. But it also borders Mexico’s most populated state, that of the state of Mexico. Control of ports and illegal trade routes into the state of Mexico and throughout the country has allowed the Templarios to expand massively their business operations.

A common misperception—at least outside Mexico—is that organizations like the Templarios trade only in contraband narcotics. But their activities are much broader: sex-trafficking, kidnapping, and extortion of businesses and farmers have also become steady and lucrative sources of revenue. Extortion forced many storeowners, restaurateurs, and avocado and lime growers to abandon their businesses. As its operations boomed, the cartel used its lawyers and guns to force citizens to sign away ownership of their homes, business properties and arable land. Or they demanded exorbitant protection money; those who missed a payment or who refused to pay risked their lives.

In light of this, the recent developments in Michoacán are all the more extraordinary. The autodefensas have managed to reclaim hundreds of properties, businesses, and agricultural lands from the cartels and have restored them to their former owners. In some cases, they have even kicked the narcos out of their gaudy luxury mansions. A number of stores and restaurants, closed down because of threats from the cartel, have reopened for business. 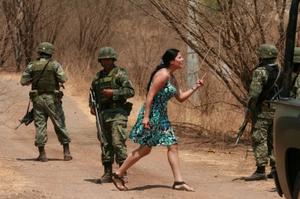 This, of course, is in the context of a seven-year-long militarized drug war in which the government has failed to provide public security. It is a conflict that instead has empowered organized crime syndicates and left the population increasingly vulnerable.

That groups of armed peasants now are more successful in controlling organized crime than the state—with its lavish military resources and support of the U.S. government—should be a terrible embarrassment and public relations disaster for the government of Enrique Peña Nieto. Similarly, the state’s apparent inability to bring the cartels under control confirms suspicions that public officials and members of the police collude with organized crime. Indeed, the self-defense forces have repeatedly accused the PRI state governor, Fausto Vallejo, of having close links to the Knights Templar.

Peña Nieto's campaign for the presidency focused on building a strengthened state and political and economic reform. Yet the pretence that the reforms are leading the country on the path to modernization and economic stability is becoming untenabe, and indeed, absurd. On the one hand, Peña Nieto is celebrated in the international media (see Time magazine’s Orwellian-titled feature on President Peña Nieto, “Saving Mexico,”) as the modern, energetic savior of a country whose neoliberal program never went far enough; on the other, we see impoverished armed peasant militias providing tangible results where the state has been utterly ineffective. 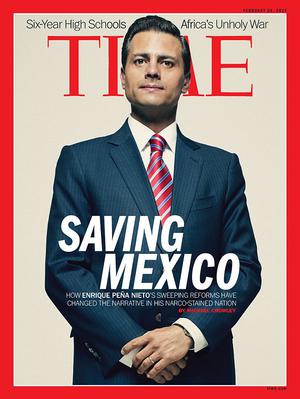 In 2006, when ex-President Felipe Calderón launched a war on the narcos, the army at least retained some degree of popular legitimacy. No sooner did the federal government unleash the army on the streets, however, than the violence escalated to unprecedented levels. Major human rights organizations, for example, have documented the army’s systemic abuse of civilians in the drug war. Thus, when in January 2014 the federal government sent thousands of troops to disarm the autodefensa group in Nueva Italia, members refused. Troops opened fire on protestors and killed four people, including an 11-year-old girl. The ensuing outrage was heightened by the fact that the army had attacked civilian protesters but failed to arrest leading members of the Templarios.

In contrast, the events of recent weeks, combined with the national and international profile of the autodefensas, have compelled the government to recognize the legitimate role of these self-defense forces. On January 27, the government formalized a tacit agreement to collaborate with the vigilantes.

Organized crime’s collusion with the state has a long history in Michoacán, but the latest developments have forced issues of corruption and impunity to the fore. The autodefensas are a manifestation of civil society’s distrust of government and all the state authorities. Not only do the self-defense forces represent a challenge to the authority of state and federal government, but they have the potential to develop into a widespread social movement—a prospect that should terrify Mexico's elites and political dinosaurs who make out so well from the chaotic, bloody, but very lucrative, status quo.