Violence and Vulnerability in Buenaventura, the Dark Side of Development

On Colombia's Pacific coast, Buenaventura has been host to the worst violence seen in Colombia for years, as the interests of developers, local people, and paramilitary groups collide.
Tweet
mboehme
Red Hot Burning Peace
2/24/2014

From the tenth-floor balcony of our hotel in Buenaventura, we sit with community leader Miguel Duarte and watch as the sunset over the Pacific Ocean streaks the sky with peach and mauve before fading to a shroud of lavender-gray and darkness. Below us, teenage girls chase a soccer ball. A few hundred yards away, a patch of the island is covered with tree tops like the heads of broccoli. “Take a photo of that island,” says Duarte, pointing at the tree line. “There are thousands of dead bodies buried on it.” 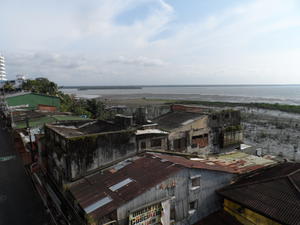 The seafront of Buenaventura, from 10 floors up (Nikki Drake)

“We need a commission from the Attorney General’s office to count the bodies," he continues. "The island is controlled by paramilitaries.”

The violence in Buenaventura is staggering, yet reliable statistics are hard to attain: official documentation is lacking and it’s left to community leaders, like 18-year-old Jesús, to try to compile the data independently. At our meeting, he pulls out his notebook and begins reading off his handwritten list of victims from a recent massacre. He gets to the end of his list, glances up, and says, “Children were cut up and heads were found in barrios Santa Monica and Campo Alegro. Last night Alberto’s cousin was killed in a confrontation. That one made the newspaper.”

According to a report issued in January 2014, the city sees two-to-three murders and three-to-six forced disappearances daily. In November 2013 alone, fighting between different armed groups displaced 2,500 families in Buenaventura.

“We’re convinced of one thing,” says Duarte. “This pressure is so that people leave.”

On the heels of shoot-outs in waterfront neighborhoods, city officials arrive and ask residents if they’re ready to sign documents in which they agree to vacate the zone. On February 5 and 6, local security forces staged an elaborately orchestrated tsunami drill for neighborhoods near the port, with armed men blocking off streets and redirecting traffic into the night. According to Colombian Process of Black Communities (PCN), the exercise was yet another effort to brainwash Buenaventura’s Bajamar residents into believing that it’s not safe to live in the area and that they should be ready to evacuate at a moment’s notice.

Many point out that Buenaventura is dangerous for people who live in neighborhoods slated for commercial development but that, paradoxically, these same areas are safe for tourists. Below our hotel, a seafood fusion-sushi bar does slow business just yards from a neighborhood where armed groups recently did battle.

It’s Friday night in this commerce town, and clubs cater to weekend carousers with pockets full of pesos.  Against a backdrop of giraffe-like cranes, half-built high-rises sprouting rebar, and a balmy breeze dispersing salsa beats, Duarte explains that 15 or 20 years ago, people began to talk about megaprojects in the region: port expansion, a cargo terminal, a tourist boardwalk, and an international airport in nearby Cali. Those conversations coincided with the beginning of the market liberalization process, as the port changed from public to private ownership.

Over the past 15 years, as the armed conflict arrived to nearby rural areas, many residents fled their farming communities at the outskirts of Buenaventura and settled in ocean-front neighborhoods near the city center, joining communities of Afro-Colombians who had arrived generations ago. In 2005, the FARC and Colombian military battled in Buenaventura. In 2006, paramilitaries entered the urban zone to protect businesses and terrorize the local population.

The first interurban displacement in Buenaventura—in which people fled from one neighborhood to another within the city—was in 2009. Today, ground zero for violent displacement coincides perfectly with zones marked for port expansion, a coal warehouse, a massive container storage area, and a tourist promenade.  The violence, PCN states, is “part of the war strategy to control territory and clean out the zone to bring in projects.”

Residents in vulnerable neighborhoods are not opposed to the city’s economic growth, per se. But many feel that projects should benefit all people in the area, not bring prosperity to few while forcing misery on most.

That’s what Remedios’ husband, Eduardo believed. Their home in Caucana, about 45 minutes from the port, is along the road being widened to facilitate port expansion and accompanying projects in order to make Buenaventura competitive for Free Trade Agreement projects.

The old road is narrow, windy, and unpaved, meaning that it currently takes a truck seven or eight hours to make the trip from Buenaventura to Bugalagrande, a town along the Pan-American Highway. The new road will reduce the journey to about an hour.

Eduardo opposed the road expansion through their community because small children play there, and the project was contaminating their air and bad for people’s health. Remedios said, “He’d been looking to strengthen the community. He didn’t want to leave people in misery.” He’d been advocating for the community’s right to Free Prior and Informed Consent for new projects on their land guaranteed under Law 70, or the “Law of Black Communities."

One morning Eduardo got a call that warned him he’d be killed if he ran in upcoming community council elections. For months he lived under the dark cloud of death threats, and on February 23, 2013, he was murdered. A year later, despite the efforts of his wife and other community members to seek justice, the government has made no progress in the investigation of his death.

“It has left me desperate, my kids too. They’re struggling at school. They don’t remember their vowels, just sleep, play, fight, scream….My children want to know why their father was murdered. They’re small, thinking bad thoughts, seeking vengeance. I’m asking for help because I don’t want my kids to become bad people.”

While we are in Buenaventura, a death threat is circulated, naming as military targets indigenous groups, campesinos, Marcha Patriotica members, protestors who block roads, and “guerilla-defending” NGOs—the name often used by paramilitaries to refer to NGOs that work on human rights issues.

Back on the tenth-floor balcony, a man whose community is surrounded by illegal armed groups looks out over the port, past the island of dead bodies, to the green lights blinking at the edge of the bay. He says, “If we don’t act quickly in Buenaventura, there will be more deaths.”

Margaret Boehme is a member of the Witness for Peace Colombia team based in Bogotá. She majored in English at Berkeley.