There’s nothing new about drones flying over Mexican airspace without congressional approval. But Peña Nieto is challenging the most traditional—and also progressive—practices of sovereignty and national development in Mexico.
Tweet
Peter Watt
Mexico, Bewildered and Contested
3/10/2014

Peter Watt: Twenty years after the North American Free Trade Agreement (NAFTA) came into effect, the administration of Mexican president Enrique Peña Nieto is accelerating a deeply unpopular process of neoliberal reform. To what extent does the return of the Institutional Revolutionary Party (PRI) in Mexico represent a cross-party and cross-border strategy of political and economic integration and how do you view the recent resurgence of the PRI? 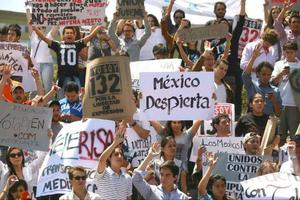