Border Patrol Agents Train for War on the U.S.-Mexico Border 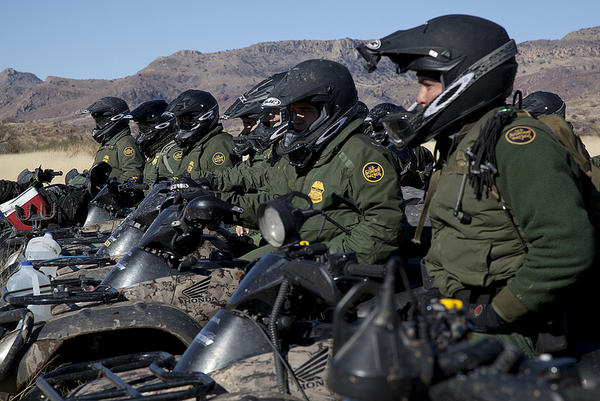 In desert camouflage and combat helmets, the Customs and Border Protection (CBP) agents kneel behind a white truck. One agent has his pistol aimed at an unseen enemy. Another has a semi-automatic assault rifle. In the distance stretches the brown desert landscape, the mountains, the expansive sky.

At first glance, the agents are alert and ready as if in combat theater in the Middle-East. At the White Sands Missile Range in New Mexico, and in the context of the persistent 30-year push of Mexico-U.S. border militarization, maybe this isn’t so far off. This CBP special response team—that in its training unleashes “torrents of fire”—is part of the United States’ largest federal law enforcement agency. With more than 60,000 agents, the Department of Homeland Security’s CBP has become a daunting domestic army.

The U.S. government often portrays CBP agents—especially the “men in green” of the Border Patrol—as professional warriors who “protect,” as former CBP chief David Aguilar puts it, “our way of life.” These agents are on the front lines fending off enemies of many shades, faces, and ideologies who are supposedly eager to penetrate the U.S. international boundary with malicious intentions. However, a Los Angeles Times article, which discusses an independent review by law enforcement experts on the U.S. Border Patrol’s use of deadly force, shows an entirely different reality.

The report claims that Border Patrol agents have stepped out in front of vehicles to justify shootings. It says that agents, out of frustration, have fired at people throwing rocks. Indeed, in fiscal year of 2012 alone, the same year that CBP purchased 36,475,000 rounds of ammunition, agents opened fire on rock throwers 22 times.

LA Times reporter Brian Bennett writes, “U.S. Customs and Border Protection, which had commissioned the review, has tried to prevent the scathing 21-page report,” released in February 2013, from seeing the light of day.

And as if further underscoring the report’s findings, the article came on the heels of another incident in which a Border Patrol agent shot and killed 41-year-old Jesus Flores-Cruz near San Diego on February 19. Again, rock throwing was the justification. The San Diego County Sheriff’s Office went as far to claim that the Mexican national heaved a “basketball-sized rock” at the agents.

The report, which reviewed 67 cases that resulted in 19 deaths, recommended that Border Patrol prohibit agents from shooting at people who throw things that can’t cause serious physical injury and not shoot at vehicles unless “its occupants are trying to kill them.”

“It should be recognized that a half-ounce (200-grain) bullet is unlikely to stop a 4,000-pound moving vehicle, and if the driver…is disabled by a bullet, the vehicle will become a totally unguided threat," Bennett quotes verbatim. "Obviously, shooting at a moving vehicle can pose a risk to bystanders including other agents."

Initially, Border Patrol responded with a “Law Enforcement Sensitive” document by saying that if a drug-trafficking organization knew that Border Patrol couldn’t fire at vehicles, they might be more inclined to run an agent over. And if agents could not fire at rock throwers, it could create an even more “dangerous environment,” since Border Patrol often works in desolate areas.

In other words, Border Patrol argued that they needed to treat the borderlands like a pseudo-war zone, a place rampant with potential enemies.

And why wouldn’t they think this way?

It is an area where Predator B drones—some equipped with “man-hunting” radar systems—hover above like in Afghanistan, and sophisticated armored vehicles such as Strykers rumble at speeds up to 60 miles per hour. Forward operating bases, once reserved for U.S. wars abroad, have now arrived and are "gaining, maintaining and expanding" to isolated locations in Texas, New Mexico, and Arizona. The Department of Homeland Security just awarded Israel’s Elbit Systems—which prides itself on “10+ years securing the world’s most challenging borders,” or "Israeli pacification of Palestinian resistance" as journalist Jimmy Johnson puts it—a multi-million dollar contract to build high-powered surveillance towers in Arizona.

However, on March 7, when the U.S. federal government released the Border Patrol's use-of-force policies, along with a directive from Border Patrol chief Mike Fisher, there seemed to be change in the air. Fisher said that the “level of force applied must reflect the totality of the circumstances surrounding each situation.” He encouraged agents to find alternatives to using deadly force unless their lives were in danger or under serious threat of injury.

Although this was widely reported as a significant change, according to both the ACLU and Border Patrol Union it was much ado about nothing. Both organizations stated it was merely a reiteration of the current policy.

“As overseas contingencies and deployments for U.S. armed forces taper off, Arizona’s citizen soldiers are shifting their focus to domestic missions to gain real-world experience and maintain readiness,” showing the ever-increasing blurriness between “border security” and war. In war soldiers are taught to eliminate the enemy.

It was in 1999 that sociologist Timothy Dunn wrote that the border has served as a “contemporary proving ground” for the militarization of law enforcement. He stated that this militarization happened on a “deeper and broader scale” on the border than anywhere else in the United States.

“These developments justify a close examination of the militarization of border law enforcement and the status of human rights,” Dunn warned long before the significant upsurge, if not epidemic, of Border Patrol shootings we see today. 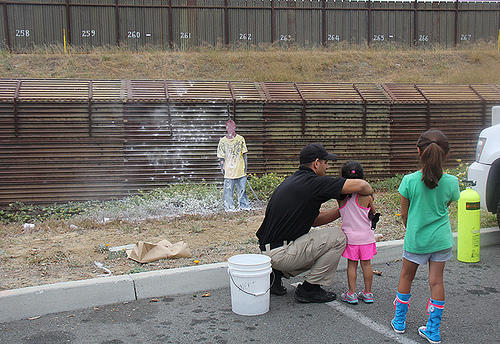 In one photo an agent leans down with his arm around a young girl, dressed in pink, who is looking at a mannequin, dressed in a baggy shirt and blue jeans propped up in front of the border wall. It is impossible to know exactly what the agent was conveying to the girl while he had the pistol in his hand, but newspaper reports alleged that CBP was teaching the kids how to "attack migrants."

Maybe it was just meant, as CBP insisted, to “build relationships and increase awareness about law enforcement,” and to teach the children about “gun safety.” However, if the scathing report and the prophesies of Dunn are any indication, such state violence from this Department of Homeland Security agency is the natural outgrowth of a militarized zone which insists that enemies are everywhere. The guns of the increasingly militarized borderlands are indeed often aimed at people dressed like the mannequin on the border wall, no matter the PR spin.