Upcoming run-off elections in El Salvador and Costa Rice look positive for social democratic candidates. Sánchez Cerén and Solís take their policies to the polls.
Tweet
ramirof
NACLA-CLACS Student Blog
3/7/2014
El Salvador and Costa Rica will hold run-off presidential elections on March 9 and April 6 respectively, and campaigns promoting an increasingly popular political position will be put to the test.
Social democracy, which attempts to establish socialism within global capitalism, utilizes reforms to incorporate welfare programs and limits on corporate greed while promoting open markets. The political ideology, which gained popularity following the end of the Cold War, is generally regarded as taking a moderate economic approach.
In Central America, social democracy is certainly catching the attention of numerous politicians, as candidates endorsing the position are taking a larger slice of the voting pie. 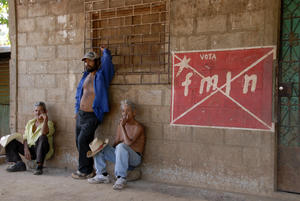 Salvador Sánchez Cerén, representing El Salvador’s Farabundo Martí National Liberation Front (FMLN) party, won 48.9% of votes in the first round of the presidential election on February 2. The former guerilla leader was just a few percentage points short of earning 50% of votes required for a one-round election. Rival candidate Norman Quijano of the Nationalist Republican Alliance (ARENA) earned 38.9% of votes.
Luis Guillermo Solís, representing Costa Rica’s Citizen’s Action Party (PAC), walked away from the first round of the presidential election, which also took place on February 2, with 30.6% of votes. Solís’ major opponent, Johnny Araya of the National Liberation Party (PLN), earned 29.7%.
Although El Salvador and Costa Rica may have dramatically different political histories, the first round of presidential elections demonstrated one reality: Candidates running on social democratic platforms received the largest number of votes. It is important to note, however, that both leading candidates have not always embraced social democracy.
Sánchez Cerén is the current Vice President of El Salvador under the center-left administration of President Mauricio Funes who took office in 2009 as the exponent of the FMLN’s social democratic wing. Despite belonging to the Marxist-Leninist Liberation People's Forces (FPL), one of the five groups that eventually merged to form the FMLN in 1980 in the course of the country’s brutal civil war, the former guerilla leader, like many other leftists following the collapse of the Soviet Union, traded his revolutionary vanguardist outlook for a reformist one. Calls for the eradication of the foundations of capitalism as an economic system in El Salvador were eventually replaced with rhetoric promoting equal distribution of wealth by building the country’s trade economy.
Throughout Funes’ ongoing administration, many far-left FMLN constituents have and continue to view warily the journalist-turned-politician’s moderate stances on privatization and foreign investment, citing his disregard for the exploitation of labor through capital in the country’s market-oriented export system. Those on the center-left, however, praise his ability to maintain healthy relations with international investors and conservatives all the while that he put forward social welfare programs that were alien to El Salvador prior to his 2009 election. Sánchez Cerén, although still slightly to the left of Funes, rebranded himself as a social democrat throughout his recent presidential campaign, emulating Funes’ tenure as national leader. Consequently, far-left FMLN party leaders will monitor the success of diluted socialist oratory and examine social democracy’s ability, or inability, to win votes in the upcoming run-off election.
But the testing of social democratic campaign strategies in the second round of elections will also be analyzed by the country’s conservative sector.
Norman Quijano, who resigned from his post as mayor of San Salvador last August, represents El Salvador’s hardline right-wing community, with ARENA at the helm. From employing violent, militarized tactics like the controversial mano dura policy in combatting gang crime to condemning the perpetuation of social programs for the working class during his time as mayor, the staunch conservative is far from embracing a social democratic or even center-right campaign approach. Although he is praised by other fiscal conservatives for leaving San Salvador with a $4 million surplus in 2011, his coercive approach to controlling  the country’s gang violence and his connections with former President Francisco Flores’ corruption scandal involving the embezzlement of a $10 billion donation left many Salvadoran progressives under the impression that his views are outdated. Growing discontent with Quijano’s traditional crime-fighting tactics was especially evident when Funes, his political adversary, received praise from many conflict analysts in 2012 for spearheading a non-coercive truce between leaders of El Salvador’s two largest gangs: the Mara Salvatrucha 13 (MS-13) and the Mara Calle 18 (18th Street).
ARENA’s leaders, battling the loss of popular support among younger voters, will surely monitor Sánchez Cerén’s social democratic trajectory as it is put to the test next month. If Sánchez Cerén emerges victorious, which seems likely, Quijano and ARENA leaders may consider borrowing a few campaign tactics from the FMLN’s handbook that appeals to both centrist and leftist voters.
In Costa Rica, the outcome may take similar shape.
Solís, who dominated the first round of elections with slimmer margins of success, was originally a member of the PLN, which has moved from center-left to center-right politics within the last few years. The Tulane University-educated candidate left the party in 2005 after accusing its leadership of corruption and mounting conservative policy. Although not as leftist as Sánchez Cerén, Solís also consolidated a lead in the first round of elections promoting social democratic causes, supporting low-cost healthcare and improved regulation of environmental management.
Araya, Solis’s primary competitor and former PLN colleague, embodies the center-right political course on which current President Laura Chinchilla has embarked.. Chinchilla, supportive of Araya’s campaign, took an especially conservative turn throughout her presidency when she opposed amendments promoting the separation of the Roman Catholic church and the Costa Rican government and banning emergency contraceptives altogether. Although the PLN is nominally a social democratic party, most Costa Ricans have acknowledged the alternative path it has taken toward conservatism. Chinchilla and her party’s leadership experienced an almost 10% loss in voter approval in 2011.
The PLN’s conservative cadre, along with far-left politicians, who have historically not had much success in Costa Rican elections, will certainly keep their eyes peeled on Solís’ performance in the second round and monitor the success of reformist, center-left and social democratic campaigning.
Overall, both run-off elections in El Salvador and Costa Rica will test the strength of social democratic campaigns, the candidates who have embraced center-left politics and those on both the far right and left who are hesitant to implement this approach.
Ramiro S. Fúnez is a Honduran-American political journalist and activist earning his master's degree in politics at New York University. Follow him on Twitter at @RamiroSFunez.
Tweet