After 34 Years, Walter Rodney's Assassination in Guyana now Under Review

The new Commission of Inquiry (COI), which began in Guyana on April 28, will provide a chance for the PNC government to finally set the historical record straight regarding the assassination of Walter Rodney.
Tweet
Kevin Edmonds 5/7/2014 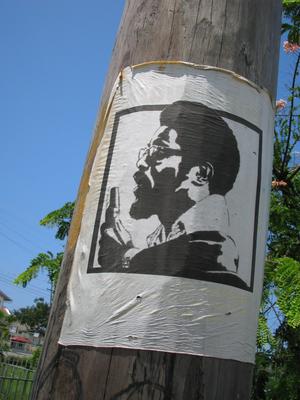 Just after 8pm on June 13, 1980, Walter Rodney was assassinated by a bomb hidden in a walkie-talkie at the height of his political activism. Rodney was a bright light in a Guyana trying to navigate its way through political chaos, and his assassination ushered in a dark time for those who hoped to bring about grassroots social transformation in Guyana, and throughout the Caribbean.

For nearly 34 years, the untimely assassination of Walter Rodney had gone virtually uninvestigated—a coroner's inquest in 1988 concluded that Rodney had perished either "by accident or misadventure." However, while the long delay and reluctance by the Guyanese government has led to several of the most prominent figures escaping justice, it is hoped that the Commission of Inquiry (COI), which began on April 28, will provide the chance for the PNC government to finally set the historical record straight.

In his short life, Walter Rodney displayed incredible intellectual ability, earning his PhD at the age of 24 and, only a few years later, producing the classic How Europe Underdeveloped Africa, a brilliant account of how the poverty and inequality that Africa currently faces is a direct result of Europe’s colonial violence and domination. In addition to these achievements, Rodney was an individual who best exemplified the idea of praxis—linking his intellectual analysis with political activity, dedicated to organizing and empowering the masses who had historically been excluded from exercising political power. As such, Rodney has been repeatedly referred to as “the prophet of self-emancipation”—a firm believer and practitioner of People’s Power and Pan-Africanism.

Rodney’s political activism was deeply shaped by Guyana's turbulent political history. In 1950, the People’s Progressive Party (PPP) started out as the first mass, multi-ethnic party in the country, running upon a pro-independence platform (at the time Guyana was self-governing, but not formally independent), stressing economic development and the creation of a socialist society. Cheddi Jagan and Forbes Burnham were both founding members of the PPP, however in the aftermath of a coup organized by the British government in October 1953, Jagan and Burnham split—resulting in a fracturing of political representation along ethnic lines. Jagan and the PPP were largely considered to be the party of the Indo-Guyanese population, while Burnham and the People’s National Congress (PNC) became the party of the Afro-Guyanese.

During the late 1970s, Guyana’s neo-colonial political system experienced a deep crisis due to the Burnham government’s repeated electoral fraud, concentrating power through unconstitutional amendments and responding to the backlash with beatings, imprisonment, and harassment of political opponents. It was in the midst of this crisis whereby the Working People’s Alliance (WPA), a newly formed opposition political party uniquely organized along the lines of racial and economic diversity, sought to transcend the establishment tactic of ruling via manipulating the country’s racial divide. Thus due to the important origins of the WPA and their political line, party members were quickly singled out by the authoritarian government of Forbes Burnham as enemies of the state. This state of repression against Burnham's political opponents, which included Walter Rodney, continued until 1992, when Cheddi Jagan was elected president.

Aside from Forbes Burnham, the “intellectual author” of the assassination who passed away in 1985, the individual widely suspected of being the behind the assassination was an ex-sergeant of the Guyana Defence Force and electronics expert, Gregory Smith. Smith quickly disappeared after the assassination of Rodney, eventually resurfacing in French Guiana under the name Cyril Johnson. Due to the repeated dismissal of calls for Smith to be extradited back to Guyana, Smith eventually escaped justice—passing away from lung cancer in 2002.

Even the U.S. State Department “declared that from the available evidence the government [of Guyana] was involved in the assassination of Walter Rodney and the removal of key witnesses to the tragedy," according to Arnold Gibbons in The Legacy of Walter Rodney in Guyana and the Caribbean.

The current COI aims to investigate and uncover the truth behind a brutal period of Guyana's history. According to the highly contested “Terms of Reference” of the COI, the three designated commissioners will “examine and report on the actions and activities of the state such as the Guyana Police Force, the Guyana Defense Force, the Guyana National Service, The Guyana National People’s Militia, and those who were in command and superintendents of these agencies to determine whether they were tasked with the surveillance of, and the carrying out of actions, and whether they did execute those tasks and carry out those actions against political opposition from the period January1, 1978 to December 31, 1980.”

The WPA has disputed the narrow timeframe of the inquiry, as repression occurred over a longer period. In addition to the narrow timeframe, the Chairman of the COI, Sir Richard Cheltenham has argued that the COI “is not intended to prosecute anyone, but to bring closure to an unresolved issue in the country’s history.” This stipulation was met with resistance by the WPA and the Guyana Human Rights Association, as the initial call for an inquiry into Rodney’s death was to be a matter ultimately concerned with justice—not only as a means to reconciliation.

During the first week of the COI, several key individuals close to Rodney testified about the threats, intimidation, and acts of state terrorism routinely faced by Rodney and WPA supporters. However, and perhaps revealing efforts to undermine the investigation, Crime Chief Leslie James revealed that seven out of the ten Guyana Police Force files on the assassination of Walter Rodney have gone missing.

Despite these obstacles, there is a very strong, organized effort to make sure that the COI is conducted in a fair and transparent manner. Spearheading that effort is the Justice for Walter Rodney Committee, made up of concerned Guyanese and supporters around the world. The second nine-day session will begin on May 27.

In addition to the deep scar on Guyana, the assassination of Walter Rodney must be situated as part of a sustained effort to eradicate the potential of the new left from taking root in the Caribbean—which included the murder of Grenada’s Maurice Bishop, leader of the New Jewel Movement in 1983.

As put forward by Aaron Kamugisha in Caribbean Political Thought: Theories of a Post-Colonial State, “His assassination at 38 deprived the Caribbean and the third world of one of its leading radical intellectual voices, and for many, was one of the decisive defeats of the early 1980s from which the Caribbean left has never recovered, stumbling from structural adjustment to neoliberal globalization in the decades that followed. Rodney for many is both remembered as the most brilliant radical intellectual produced in the Anglophone Caribbean’s post-colonial history as well as a reminder of the authoritarian lengths of the elites that govern its states."