The conflict over Bolivia's new mining law offers a window into the complexity and contradictions of the country's mining sector, as they play out during the run-up to October’s presidential election.
Tweet
Emily Achtenberg
Rebel Currents
5/9/2014

After three years of negotiations, followed by six weeks of sometimes violent controversy, Bolivia is poised to adopt a new mining law. It is the first major overhaul of the country’s mining sector since 1997, when ex-President Gonzalo Sánchez de Lozada (Goni) inaugurated the existing neoliberal mining code as part of an overall plan to privatize Bolivia’s economy. 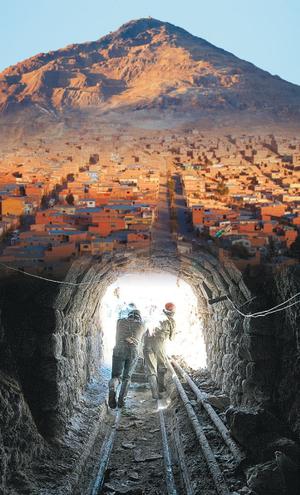 The new law seeks to bring the mining sector into conformity with Bolivia’s 2009 Constitution, and with a 2007 decree promulgated by President Evo Morales which declares Bolivia’s mineral wealth to be a patrimony of the state. The conflict offers a window into the complexity and contradictions of Bolivia’s mining sector, as they play out during the run-up to October’s presidential election.

The immediate controversy was precipitated in March, when the Chamber of Deputies refused to accept the “consensus” bill negotiated by Morales with Bolivia’s three mining sectors (state, private, and cooperative). In a surprise move, the legislative body—controlled by Morales’s MAS (Movement Towards Socialism) party—rejected a provision allowing cooperative miners to contract directly with domestic and transnational firms, as a violation of the Constitution. As MAS deputy Jaime Medrano explained, “the state can’t turn over mineral-rich areas for companies to commercialize as private property.” The deputies also asserted that the Constitution requires legislative approval of all mining contracts.

Cooperative miners, through their national federation FENCOMIN, insisted on their right to associate with private firms, since the Constitution recognizes a plural mining economy and the validity of pre-existing contracts. The mixed contracts with businesses, they argued, are essential to increase the productivity of precarious cooperative associations, which are typically composed of individual proprietors with no access to capital, technology, or other resources.

Five days of road blockades launched by thousands of cooperative miners across the country left a tally of four dead, more than 100 wounded, and substantial economic damages. Morales announced that the proposed law would be scrapped and renegotiated.

At the same time, he sealed the offices of COMIBOL (the state mining agency), ordered audits of 42 questionable mixed cooperative-private contracts, and vowed that the officials responsible for approving them would be prosecuted for treason. Mining minister Mario Virreira was fired. The new mining minister revealed that 100 of the state’s 1,642 registered mining cooperatives (6%) had contracts with private firms, which he characterized as “million-dollar” giveaways—apparently approved by COMIBOL, both before and after the new Constitution.

Under the revised law, now in its final approval stages, all pre-existing mining contracts will be respected. Any contracts whose terms and conditions do not conform to the new law can be renegotiated over 12 to 18 months.

In the future, cooperative miners will be barred from contracting directly with private firms, but can form mixed business companies with, or through, COMIBOL. All new contracts must be approved by the Legislature, but will automatically be deemed effective if no action is taken within 90 days. The Legislature is expected to approve some 600 new cooperative contracts as soon as the law becomes operational. 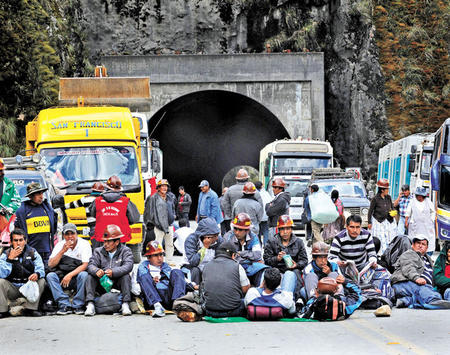 The Morales government has pledged more loans to support the cooperative sector, and will provide special support to 5,000 cooperative tin miners in the north of Potosi through a joint venture association. Legal action has been initiated against ex-COMIBOL officials allegedly responsible for approving seven illegal co-op contracts with private companies (both before and after the start of Morales’s presidency). After further review, the Attorney General has concluded that the vast majority of the 42 contracts were legitimate.

Even with the latest changes, most analysts agree that the new law reinforces the privileged position of Bolivia’s cooperative mining sector. What explains this apparently contradictory result for a government which, at least in theory, is a defender of the state’s mining patrimony?

Bolivia’s powerful cooperative mining sector is a legacy of the 1980s, when pressure from international financial institutions and a catastrophic fall in mineral prices led to a shutdown of the government mines, displacing 25,000 salaried miners. Privatization of the mines in the 1990s under neoliberal structural adjustment policies further weakened COMIBOL and destroyed Bolivia's miner-led revolutionary trade union movement, once the most combative in Latin America (and perhaps the world).

Encouraged by successive neoliberal governments to buffer the consequences of massive mining dislocations, the cooperative mining sector also flourished, allowing ex-miners to eke out a modest subsistence by exploiting accessible veins—including the mineral-rich surface dumps left by private operators—with virtually no investment, and then selling their products at depressed prices.

In recent years, with skyrocketing mineral prices, the cooperative mining sector has expanded dramatically. With 115,000 workers, the sector now generates 88% of all mining employment, dwarfing the state and private mining workforces with around 8,000 employees each. Cooperative mining now accounts for 48% of Bolivia’s $3.7 billion total mining exports. (The private sector, with its highly mechanized mines, contributes 46% of exports, with only 6% of the mining workforce. The state sector, also with 6% of the workforce, accounts for the remaining 6%.)

Critics charge that many mining co-ops today have strayed far afield from their original collective and social purpose. Rather, they have become another hierarchical form of private enterprise, controlled by small, increasingly privileged groups of associates (stockholders) who subcontract to an exploited, temporary workforce, paid only for what they produce. 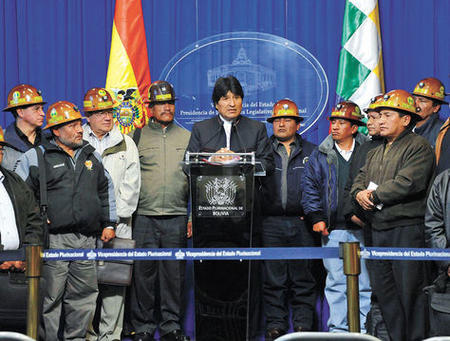 Cooperative miners reach agreement with Morales (La Razón).An estimated 75% of cooperative mineworkers do not receive health insurance or pension benefits. The sector commonly ignores health and safety laws and uses primitive extraction techniques that exploit the environment and shorten the life of the mine. Cooperative miners are exempt from paying taxes to the state (compared to 37.5% paid by the private sector, plus royalties). Historically, this privileged tax status has applied even to co-ops that associate with private companies, a practice that will terminate under the new mining law.

Politically, cooperative miners have constituted a critical support base for Morales, whose policies have continued to favor the sector. Over the past 8 years, concession areas granted to mining cooperatives have increased by more than 500%. Morales has generally respected FENCOMIN’s resistance to nationalization and increased state regulation, which cooperative miners fear will rob them of the increased earnings that they now consider their due, after decades of a struggling existence.

Critics say the new mining law shows the extent to which the Morales government, which has nourished, strengthened, and privileged the cooperative mining sector, is now hostage to its growing political clout, especially during a presidential election year. The important role of the sector in absorbing cyclical dislocations, strengthening domestic demand, and bolstering local economies in neglected peripheral zones is a related critical factor. 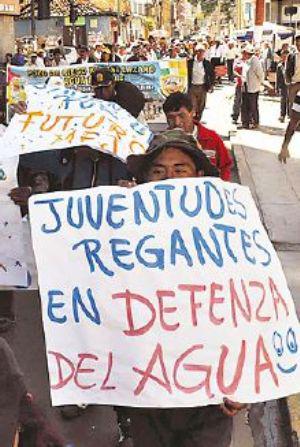 Pablo Villegas, investigator for the respected Bolivian NGO CEDIB, notes that the new law will continue to allow private mining companies to maximize profits and dodge labor and environmental obligations through their existing exploitative contractual arrangements with cooperative miners (although their tax liabilities may increase). In many cases, these “grandfathered” contracts extend for 30 years, or even in perpetuity. Through these and other concessions to cooperative miners, Villegas argues, the law will further backdoor privatization of the mining sector and erosion of the public reserve, representing more continuity than change from the neoliberal Goni era.

The new mining law has also been heavily criticized by grassroots organizations representing farmers, irrigators, and indigenous sectors for privatizing water rights to mining operators, restricting consultation by affected communities, and criminalizing protest activities against mining. Popular organizations like CONAMAQ, the highland indigenous people’s federation which has been at odds with Morales over mining—and extractivist policies generally—on indigenous lands, were excluded from the negotiations altogether. While irrigator groups exacted some concessions during the renegotiation, a "social summit" of 800 delegates from civil society groups has denounced the law as unconstitutional, and is demanding a referendum to develop a new, socially responsible mining code.

While the new mining law may represent the best political compromise that could be achieved in time for the elections, it has not resolved underlying tensions and contradictions within the mining sector, or competing visions for the future of mining in Bolivia.