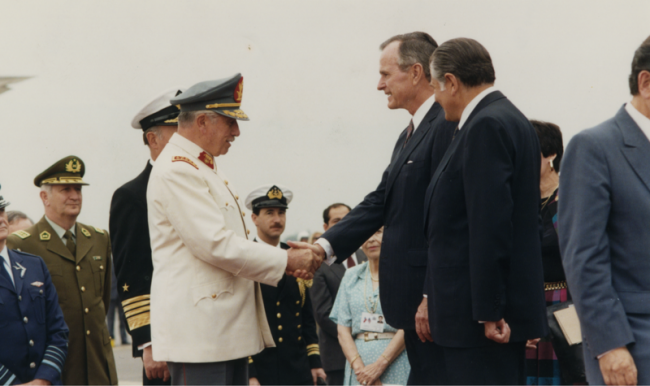 At first glance I was intrigued by Matthew Yglesias’s recent post “American Democracy Is Doomed,” since it seemed to critically address the U.S.’s partisan gridlock problem. But a few paragraphs in, anyone with their head not in the sand will have one of those early 21st century WTF moments, when Yglesias quotes an apparent hero of his, Spanish-born political scientist Juan Linz. As part of his thesis that democracies with strong presidents tend to collapse more easily than those dominated by parliaments, Linz observes that “aside from the United States, only Chile has managed a century and a half of relatively undisturbed constitutional continuity under presidential government—but Chilean democracy broke down in the 1970s.”

Yglesias–whose Atlantic background places him squarely in the mix of moderate liberal commentary–goes on to say that “The exact reasons for why are disputed among scholars,” and those scholars he is referring to are narrowly concerned with a particular style of democracy, presidential- or parliamentary-dominated in terms of who really wields power. He points out that “American-style systems are much more common in the Western Hemisphere and parliamentary ones are more common elsewhere,” concluding that “Latin-American countries have experienced many episodes of democratic breakdown, so distinguishing Latin-American cultural attributes from institutional characteristics is difficult.”

Given that the historical consensus is that the US has long wielded disproportionate influence in Latin America, and that the CIA, with the tacit approval of Secretary of State Henry Kissinger, had been directly involved in destabilizing the Chilean democracy, Yglesias’s seeming confusion about the exact reason for the fall of Chilean democracy in 1973 is perplexing. He asserts as well that “American-style" [president-oriented] systems are “much more common” in the Western Hemisphere, as if it were an accident that the U.S. has had designs on the region since Manifest Destiny (coined by a newspaper editor of course) was used to justify a 19th century US war with Mexico that wound up inhaling the entire American Southwest from Mexico.

I was hoping that Yglesias would be offering a new analysis of the 2010 Citizens United ruling and the proliferation of Koch Brothers and other well-funded Conservative think tanks, PACs, and non-profits that have created a situation more dire than previously imagined when K Street lobby shops loomed large as shadow governments in the making. But his lengthy essay reveals the problem with political discourse written from within–and only within–an ontological sphere of political governance, set on maintaining the “scholarly” status quo by erasing the history of US intervention in and hegemony over Latin America.

The fault I find in Yglesias’s reasoning is beyond my general disagreement of a political equivalence between “Liberals” and “Conservatives” in American politics. When he alludes to the idea that Bush and Obama have been “dangerously exceeding norms of executive authority,” he is right in critiquing Obama’s lack of deviation from Bushian gambits developed during the onset of the “War on Terror,” but is it because “Liberalism” has lost its mind and become totalitarian, or is Obama merely ceding political territory that he cannot intervene in because of extra-executive forces like the military industrial complex that a Republican president named Eisenhower once warned against? And in terms of Obama’s unilateral action on immigration–one not unprecedented, by Republicans or Democrats–hasn’t his hand been forced by the current Republican strategy of blocking at every turn almost every single Democratic position?

Yglesias’s recap of the evolution of American politics from the Gilded Age to the breakup of the Democrats’s Southern strategy, written in a predictably post-racial tone, is nuanced and offers a glimmer of rigor, but barely manages to advance his argument to prepare us for what he calls “The Honduras Scenario.” He offers a bizarre disclaimer by saying that “not all breakdowns of constitutional processes are as violent as the American Civil War,” only to ignore the fact that the Chilean coup and the subsequent Pinochet dictatorship, as fed by the broad reach of Operation Condor, was arguably as violent as the War Between the States. What follows is at best obscure and at worst revealing of a possible backdoor motivation.

In the section “The Honduras Scenario,” Yglesias makes the case that President Manuel Zelaya’s overzealousness in his attempts to re-write his country’s constitution were to allow himself to be re-elected. Because “the military typically assists with election logistics,” Zelaya tried and failed to have the military distribute ballots with his additional referendum included, and when met with resistance he fired the chief of the military. A month later the military deposed him.

This account appears to be more tempered than the one that Yglesias originally wrote, since the correction at the end the most recent version says the piece was “updated to more accurately reflect the series of events surrounding the coup…” Yet again, Yglesias treats Honduras in a geopolitical and historical vacuum. Throughout the height of the manifestation of US cold war policy in Central America, the 1980s, the Honduran military had death squads trained by the CIA and FBI. In 1995 the Honduran government launched prosecutions of some military officers, but its “presidential democracy” can hardly be seen in historical isolation from this dark era.

Aside from that, when purely observed within the context of the 21st century, there is ample evidence that the US government either directly participated in the overthrow of Zelaya through its ambassador and influence over the national media, or was at the very least sluggish, unresponsive, and in the end tacitly approved of the coup. So how can Yglesias seriously claim that it is a scenario, that, while not exactly congruent, could “likely play out in the United States.”? Is it that Honduras or some other country’s ambassador or intelligence agencies have power to sway the US government and its voters?

No, says Yglesias, it’s because of America’s dangerous flirtation with “constitutional hardball,” exemplified by Obama’s “handling of K-12 education policy” and of course, that troubling decision to “protect millions of unauthorized migrants from deportations.” This “new frontier” of executive policymaking leads Yglesias to muse that “Obama (or some future president) could have his political opponents murdered on the streets of Washington and then issue pardons to the perpetrators.” He continues, “This would be considerably more legal than a Zelaya-style effort to use a plebiscite to circumvent congressional obstruction — just a lot more morally outrageous. In either case, however, the practical issue would be not so much what is legal, but what people, including the people with guns, would actually tolerate.”

So this is what it’s come to. Making a case that an imperial Obama presidency is easily comparable to the briefly lived tenure of a left-leaning Central American president ruling a country with a military that is charged with distributing ballots and is only 25 or 30 years removed from running CIA-trained death squads, and since Zelaya’s departure, has reinvented death squads as a tactic used to assassinate gang members under the rubric of the War on Drugs. This might make since if you assume that good old fashioned blowback brought home the Latin American Cold War to US politics a long time ago, probably in 2000 during an infamous election re-count in a state with a Spanish name, la Florida.

Of course, maybe there’s a method to this madness. Isn’t it Hillary Clinton that seems to be running at least partly on a platform of ending partisan politics? “I’d like to bring people from the right, left, blue, red, get them into a nice warm purple space where everybody is talking and where we’re actually trying to solve problems,” she said last week in California. And wasn’t it Hillary Clinton who, in terms of history, will take the brunt of the blame for the U.S.’s inaction during the Zelaya coup?

It’s tempting to read between the lines here. While his Vox.com running-mate Ezra Klein–yeah the same one who thinks politics “makes us stupid“–seems to have doubt about Clinton, Yglesias seems to be more concerned about how a lack of strong candidates in the field would hurt her (and the party). They also both seem ambivalent about the current Clinton scandal about using a private email server to cloak her conducting of official government business. But regardless of any such motivation, one thing is clear. Straining for governmental analogies in Latin American countries that have been totally dominated, if not wholly owned subsidiaries of the US since World War II is a myopic, and calculatedly obfuscating way of writing about hemispheric politics.