How Human Rights Organizations Are Implicated in Migrant Deaths 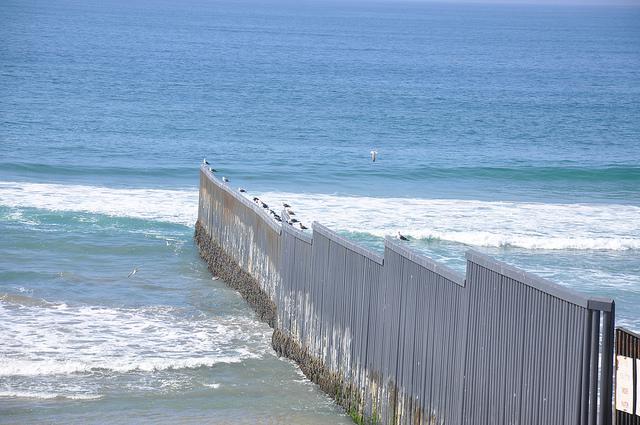 The deaths of unauthorized migrants have long scarred the U.S.-Mexico borderlands. But as evidenced by a single incident on Sunday, April 19, the Mediterranean is the global epicenter of such fatalities.

An estimated 850 migrants—from a variety of countries, including Eritrea, Syria, Sierra Leone, and Bangladesh— perished when their less-than-seaworthy vessel capsized in the waters between Libya and the Italian island of Lampedusa. According to one report, “authorities described a grisly scene of bodies floating and sinking in the warm waters, with the majority of the dead apparently trapped in the ship at the bottom of the sea.”

In response, Italy’s prime minister, Matteo Renzi, borrowed a page from the talking points of U.S. authorities by pointing the finger at migrant smugglers. Using words that obscure how the growing strength of the European Union’s border policing apparatus—what many call “Fortress Europe”—effectively requires migrants to rely on professional smugglers and take ever-riskier routes to reach their hoped-for destinations, Renzi called smugglers “the slave drivers of the 21st century.”

It is hardly surprising that officials charged with policing national territorial boundaries do not indict the very system that kills migrants: the nation-state and its associated apparatus of exclusion for those deemed undesirable or unworthy. In the case of international human rights organizations, however, one can and should expect much better. Instead, one gets (at best) handwringing and calls for governments to make greater efforts to rescue endangered migrants. Meanwhile, these same organizations uphold and legitimize the very practices that make migrant fatalities inevitable, and thus help reproduce them.

Consider Amnesty International’s response to the deaths of about 400 migrants in the Mediterranean the week before the most recent mass tragedy. The organization criticized European governments, writing that their “ongoing negligence towards the humanitarian crisis in the Mediterranean has contributed to a more than 50-fold increase in migrant and refugee deaths since the beginning of 2015.” In addition, it called upon leaders of countries of the European Union to “throw their full weight behind a robust and concerted humanitarian operation in the Mediterranean.” But Amnesty never questioned the principle of exclusion or defended migrants’ freedom of movement.

In other words, the problem for the world’s preeminent human rights organization is not how state efforts to repel desperate migrants inevitably puts them in harm’s way, but that those responsible for creating the dangerous conditions of passage don’t do enough to save those who they have imperiled. As Isabel García of the Tucson, Arizona-based Coalición de Derechos Humanos asserted a number of years ago regarding migrant rescue efforts by the U.S. Border Patrol and its auxiliaries, such endeavors are like “throwing a child in the ocean and then throwing in floaties afterward.”

Worse still, human rights groups often explicitly endorse immigration controls by countries of power and privilege. In late February, for instance, Benjamin Ward, the deputy director of Human Rights Watch for the European and Central Asia division, wrote an article for the online news outlet, Quartz, asking “what should the EU do about” all the migrants attempting to cross the Mediterranean to Europe? While calling for more liberal immigration policies by EU states and additional rescue efforts, Ward asserted that “[t]here is nothing wrong with border control or enforcement efforts.”

After all, given the war-related brutality, environmental deprivation, and profound socio-economic insecurity that plague many countries (violence and instability often produced in large part by the world’s most powerful nation-states—see here, for example), the realization of human rights often requires the ability to go to spaces where the necessary resources are located. And in our world of historically produced inequalities between countries and regions, a grossly disproportionate share of those resources is concentrated within EU countries and the United States.

These sorts of inequalities and restrictions likely compelled Hannah Arendt, the great political thinker, to speak of the “right to have rights.” If having human rights is part of being a human being, denying people freedom of movement and residence—and thus the effective ability to access a whole host of other rights—is to essentially deny their very humanity.

For too long, mainstream human rights organizations have done little to challenge this denial. To the contrary—not least in relation to the U.S.-Mexico borderlands—they have often affirmed it, and thus helped to legitimate the apparatus of exclusion.

As a report issued last September by the International Organization for Migration made clear, border policing regimes have proven quite deadly. The study established 40,000 migrant deaths across the globe, the majority in the Mediterranean, and about 6,000 in the U.S.-Mexico borderlands, since 2000.

Because the bodies or remains of many who perish in the seas, deserts, and mountains that divide the rich from the poor, the relatively privileged from the disadvantaged, and the largely white from the nonwhite are never found, this remains a conservative assessment.

Even if human rights organizations like Human Rights Watch and Amnesty International begin to directly challenge the machinery of nation-state border policing that produces this massive loss of life, the fatalities will surely continue. But by calling the principle of exclusion into question, the organizations would help to delegitimize the very practices and structures that make the deaths all too predictable—a necessary first step to dismantling this institutionalized injustice.

More migrant deaths in the Mediterranean, the U.S.-Mexico borderlands, and along many other zones of spatial division are sure to occur in the foreseeable future. Will the human rights establishment continue to aid and abet the state forces of death, or take a fundamentally different stance, one consistent with its highest principles?

Joseph Nevins teaches geography at Vassar College in Poughkeepsie, New York. Among his books are Dying to Live: A Story of U.S. Immigration in an Age of Global Apartheid (City Lights/Open Media, 2008) and Operation Gatekeeper and Beyond: The War on “Illegals” and the Remaking of the U.S.-Mexico Boundary (Routledge, 2010). For more from the Border Wars blog, visit nacla.org/blog/border-wars. Follow it @NACLABorderWars.