Top Ten Issues for the Pope's Visit to Bolivia 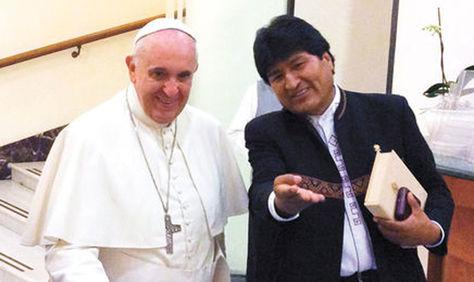 Bolivia is in the international spotlight this week, sandwiched between Ecuador and Paraguay on Pope Francis’s three-country itinerary for his first visit to Spanish-speaking Latin America. It will be the first time Bolivia has hosted a pope in 30 years.

The three-day visit to Bolivia is projected to generate $123 million in economic activity. Some 2 million of the faithful (residents and tourists) are expected to crowd the streets and plazas of El Alto, La Paz, and Santa Cruz to catch a glimpse of the “Popemobile.” Many will participate in the Papal mass, to be delivered in four languages (Spanish, Aymará, Quechua, and Guaraní). A national holiday has been declared for the affected departments.

From the Church’s perspective, the main (although not overtly stated) purpose of the visit is ecclesiastical recruitment. While there are more than 425 million Catholics in Latin America, constituting nearly 40% of the world’s total Catholic population, devotees have deserted the church in record numbers in recent decades for other faiths, or for no religion at all.

Competition from evangelism is especially strong among indigenous populations, including in Bolivia, where 77% of the total population still identifies as Catholic (as compared to 89% in 1970).  With his immense popularity, folksy style, and message of identification with the indigenous poor that resonates widely in Bolivia and elsewhere in Latin America, Pope Francis is expected to breathe new life into the Church as a relevant and vibrant twenty-first century institution.

But the Pope’s visit to Bolivia is also highly charged politically. Not surprisingly, both President Evo Morales and the country’s combative social movements are looking to the Pope to advance their own agendas. Here are a few issues that are likely to play out—either openly, or under the radar—during the Pope’s Bolivian tour.

1. Church-State Relations. Relations between the Bolivian government and the Church hierarchy have been strained since Morales first came to power in 2006. Initially, Morales branded the Church as a vestige of colonialism and an “instrument of domination, spreading injustice and inequality.” In the wake of the 2009 Constitution which made Bolivia a secular state, Morales clashed with the Church over its role in education, and with bishops who backed conservative lowland elites in their demand for regional autonomy (bringing Bolivia to the brink of civil war).

In recent years, the Church has criticized Morales on human rights issues and the persecution of political opponents. But the growing relationship of mutual admiration  between Morales and Pope Francis has opened new doors for dialogue and collaboration, as evidenced by the unprecedented cooperative planning which took place in preparation for the papal visit. As the head of the Bolivian Episcopal Conference recently explained, “The Pope is coming (to Bolivia) to have a good relationship with President Morales.”

2. Maritime Dispute. In view of the Pope’s recent starring role in international diplomacy between the US and Cuba, Morales is hoping to enlist his efforts in resolving a long-standing dispute with Chile to regain Bolivia’s sovereign access to the sea. In a legal brief presented to the International Court of Justice last May, Bolivia argued that Chile has not lived up to its treaty obligations regarding the 250 miles of coastline taken from Bolivia in a 19th century war—a lapse which has compromised Bolivia’s access to export markets, with significant economic consequences. A recent UN study concludes that landlocked countries, on average, have a per capita GDP which is only 57% of the GDP achieved by their maritime neighbors.

While Chile has rejected the notion of Papal mediation, at least for now, Bolivian government officials note that the Pope is paying “close attention” to the matter and has encouraged a peaceful, negotiated solution between the parties. The Pope has also requested a copy of Bolivia’s “blue book” documenting its historical and political case for sovereign access to the sea. Any action by the Pope to help resolve the dispute would bring immense political benefits to Morales, whose judicial initiative—framed as a case of national sovereignty—has galvanized and united public opinion in Bolivia across regional, class, and ethnic lines.

3. Climate Change. The Pope will present his recent ground-breaking encyclical on climate change to an international summit of indigenous and popular movements in Santa Cruz, where Morales will also showcase the Bolivian government’s 16-part manifesto on the same topic. Social movements allied with the Morales government can be expected to emphasize the coincidence of the two documents, especially with respect to concepts such as climate justice, climate debt, and the causal relationship between capitalist exploitation and global warming.

At the same time, environmental and indigenous groups opposed to the government’s extractivist and developmentalist policies hope to use the occasion to highlight the discrepancy between Morales’s pro-environmental rhetoric on the international stage and the costs of his destructive domestic practices. In particular, they cite Morales’s recent directives promoting oil and gas drilling in Bolivia’s national parks, advancing the controversial highway that would bisect the TIPNIS reserve and indigenous territory, and threatening to expel NGOs that interfere with extraction in protected areas.

4. Coca. The Pope’s request for coca leaves to help ward off altitude sickness upon his arrival in El Alto has been widely touted by the Morales government as an endorsement of its long-standing campaign to promote the medicinal and nutritional benefits of coca. The coca leaf is legally cultivated in Bolivia, subject to an innovative system of social control by the coca growers unions, and is an important part of the country’s cultural patrimony.

In 2013, Morales succeeded in getting the UN to recognize coca -chewing as legal in Bolivia under international law, despite the leaf’s long-term classification as a narcotic, and against strong opposition from the US. Some 20,000 bags of organically-grown coca leaves will be distributed free of charge to the multitudes awaiting the Pope, courtesy of the coca growers unions and the Bolivian government.

5. Prisons. In Santa Cruz, the Pope is scheduled to meet with inmates of the Palmasola prison, site of a recent riot and fire that killed 32 and injured more than 60. The visit will shine a spotlight on Bolivia’s notoriously overcrowded prison system, which boasts the highest rate of inmates in pre-trial detention (93%) in the Americas.

These conditions reflect the country’s poorly-functioning and seriously backlogged judicial system, as well as the legacy of dictatorship-era laws—promoted by the US—that provide stringent penalties for minor drug offenses. Human rights groups hope that the Pope’s visit will focus international attention on the need for structural reforms to Bolivia’s judiciary and penal systems.

6. Luis Espinal. Also at the behest of Bolivian human rights groups, the Pope will commemorate the site in La Paz where revered priest Luis (”Lucho”) Espinal—a fellow Jesuit—was found after being tortured and murdered by the dictatorship’s paramilitary squads in 1980.  Espinal, a radical champion of Bolivian miners who was also a poet, journalist, and filmmaker, helped lead a 1970s hunger strike which is widely credited with bringing down the dictatorship and paving the way for Bolivia’s enduring—albeit with its ups and downs—democracy.

Espinal was murdered in Bolivia two days before Salvadoran Archbishop Oscar Romero’s assassination in El Salvador, a coincidence not lost on Bolivian human rights and Jesuit activists. Mindful of the instrumental role played by Pope Francis in the recent beatification of Romero, they are also demanding sainthood for the martyred Espinal.

7. Abortion and LGBTQ Rights. While the Pope appears open to reconsidering some of the Church’s most reactionary doctrines on family issues, in Bolivia its traditional patriarchal and anti-gay policies remain firmly entrenched. In anticipation of the Pope's arrival, members of the feminist collective Mujeres Creando (dressed as pregnant nuns) staged a symbolic protest in La Paz this week, which was disrupted by police. Among other things, the Bolivian Church continues to undermine Bolivia’s therapeutic abortion law, and vigorously opposes a proposal for same-sex civil unions which has languished in the legislature for two years.

8, 9, 10. Sectoral Mobilizations. Also ahead of the Pope’s visit, Potosí civic groups have been marching on La Paz with a list of 26 regional demands, while cooperative miners have threatened mobilizations to coincide with the event if their issues are not addressed. Striking butchers resisting a newly-imposed tax recently paralyzed downtown La Paz and have threatened to escalate their tactics.

While the Morales government accuses these groups of “blackmail” and officially refuses to negotiate under pressure, it appears to have sufficiently placated—or intimidated—them to avoid any potential disruption. If not, the Pope may have a taste of Bolivia’s vibrant social movements in action, perhaps a useful reality check for his “church of the poor.”