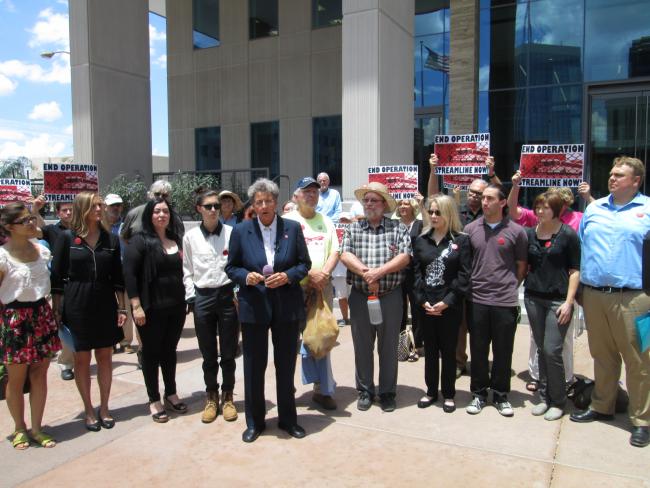 Editor’s note: On July, 20, 2015, a Pima County judge sentenced to time served 12 individuals who blocked two buses transporting apprehended migrants in Tucson, Arizona in 2013.  Convicted earlier this year for obstruction of a highway and public nuisance, the group was protesting Operation Streamline.

Implemented in 2005 by the Department of Homeland Security (DHS) and the Department of Justice, Streamline, in the words of former DHS head Janet Napolitano, is “a geographically focused operation that aims to increase the consequences for illegally crossing the border by criminally prosecuting illegal border-crossers.” The border-wide program processes hundreds of apprehended Mexican and Central American border-crossers daily through the federal court system and convicts them of the misdemeanor of illegal entry. Upon pleading guilty (which they invariably do), defendants receive sentences of anywhere from time served to six months and then are formally deported, thus making it a felony if they return and making them liable for anywhere from two to 20 years in prison. Streamline has made so-called illegal re-entry the most commonly filed federal charge and dramatically increased the criminalization and vulnerability of unauthorized U.S.-Mexico border crossers.

Below is the statement that one of the defendants, Steve Johnston, made to the court prior to sentencing.

My name is Steve Johnston.  I am 70 years old. I was born and grew up in Alabama in the 1940’s and 50’s.  I have worked with No More Deaths since 2005, making two water patrols into the desert just this past week.  I have volunteered at Casa Maria soup kitchen since 1990.  I have been doing country research to verify asylum claims for the Asylum Program of Arizona since 1999.  I have volunteered at Brother David Buer’s homeless cooling center and the Central City homeless shelter since 2003.  I have been volunteering at the Arizona Sonora Desert Museum since 1999, taking care of fish, amphibians, snakes and lizards.  Until my arrest, I volunteered for three years on a Community Justice Board, a restorative justice program for teenagers run by the Pima County Attorney’s Office.

For my close friends, the Huerta/Ortiz/Perez family, who immigrated to Tucson from Mexico in 1991.  Some of them have gained green cards; some hope for DAPA relief (Deferred Action for Parents of Americans) as parents of U.S. citizens.

But, for Carlos Omar Perez, who drove with me to Baltimore for my brother’s wedding when he was 14, life became a nightmare after a traffic stop.  Omar arrived here when he was 6 years old.  Very bright and quick, he was the family translator till everyone else learned English - a Tucson High graduate, Pima Community College student, restaurant worker from age 14, rising to head chef.   He was arrested illegally ‘driving while brown’ in a white neighborhood but still turned over to Border Patrol and ultimately deported.  He returned, of course, and lived quietly for a couple of years, gaining a U.S. citizen wife and two beautiful daughters, Josie and Sophie.  Again he was caught and arrested on trumped up charges (“kid’s stuff”, in Margo’s words, who helped defend him) and after spending 18 months in Eloy, he was again deported.  After tremendous emotional trials, desperate economic struggles and five years of hard, hard work, at age 30 he now owns and operates a Modelorama [a beer and wine store] in Nogales, Sonora. His U.S. citizen children go to Mexican schools to keep the family together. A more valuable citizen we could not have, but he’s barred from entry into the U. S. for 10 years.

The rest of Omar’s family of seven now numbers 15.  They have worked hard and saved, volunteering for the entire 25 years at Casa Maria soup kitchen, raising talented and honorable kids.  They are the kind of people our country needs, but one traffic stop tomorrow and they could be whisked away from their families, rushed through some fantasy court proceeding, and deported, perhaps to be caught up in Streamline while returning across the desert to the family.

Why did I crawl under the Streamline bus?  Because of the children known as Tunnel Kids– many of them pre-teens discarded by their families - filthy, covered with sores and often drug-addled from sniffing glue.  In the early 1990’s, these children - boys and girls - crossed the border every day, risking their lives by hopping on the Nogales to Tucson train to jump off near Casa Maria for a cup of soup and a sack lunch, returning every day to the grave dangers for a child living in the sewers of Nogales of beatings, murder and sexual slavery.

Why?  In memory of Beatriz Adriana Sanchez Salazar, aged 23, who died of hyperthermia in the mountains south of Ruby Road [southern Arizona] on the 4th of July, 2005, during my first week working in the desert with No More Deaths. Margo [Margo Cowan, the long-time civil and human rights activist and lawyer who defended the twelve protesters] and I happened on the scene and learned that Beatriz had fallen ill in the crushing heat and the steep, dangerous mountain trail.  She was carried and died on a stretcher fabricated from dead tree limbs and their own belts and clothing by her fellow travelers.  They continued to carry her over one of the most rugged trails in Arizona and, reaching the Ruby Road, gave themselves up to Border Patrol rather than abandon her body.

Why?  In memory of Lucresia Dominguez Luna, who, days without water, died on the King Anvil Ranch, and her son, Jesus, 15 years old, who was alone with her that horrible day, and her father, Cesario Dominguez, who came from his village in Zacatecas and spent six weeks searching the Altar Valley for her remains, finding the bodies and bones of three other people who had perished in that terrible heat before finding her animal-scattered remains, which he could only identify by the rings on her blackened fingers.

Why?  In honor of Yolanda, a week in the boiling desert, overcome by injuries and deserted by her coyote, she was found and carried many miles by three young Mexican men who had never seen her before.  They found Cesario searching for his daughter, who called No More Deaths.  We had to cut the shoes off Yolanda’s swollen, bloody feet and extracted hundreds of cactus spines from her tongue, mouth, face and body – for she had tried to suck moisture from prickly pears.  We took her to St. Mary’s Hospital and she recovered and moved on to reunite with her family.  Cesario said, “I may not have saved my daughter, but I helped save someone’s daughter.”

Why?  For José, 25 years in Phoenix working as a stone mason, arrested and deported for running a stop sign on his bicycle, who we luckily found semi-conscious and near death under a juniper in a wash away from any trail.  He and many others thanked us for saving their lives.

Why?  In loving memory of Josseline, 14, from El Salvador, crossing with her 10 year old brother to reunite with her mom in Los Angeles.  Stricken with illness on the trail, she was cruelly abandoned by their coyote.  Josseline died a gruesome death after spending two weeks alone in the freezing February wilderness, in such anguish and despair that she finally removed her shoes, tiny blue Keds, and carefully placed them by her side and then put her feet into a freezing pool of water.  Her body was found a week later by four No More Deaths volunteers.  Her death caused No More Deaths to go to a year-round program in the desert, which has undoubtedly saved an unknowable number of those who followed.

Why did I climb under that bus?  For Emmett Till, who in 1955 was tortured and killed at age 14 just a few miles from where I was summering with my grandmother in Holly Springs, Mississippi.

For Dr. Martin Luther King, Jr., after reading “Letter from a Birmingham Jail,” whose murder the day after I heard his last speech - “I’ve been to the mountain top and seen the promised land” - completely changed the direction of my life.

And most especially for sweet John Fleming, the nicest man you’d ever know. The father of 12, he worked as a school custodian and at night cleaned out the insides of concrete truck mixers with an air hammer - a loud, nasty, dangerous job - until a driver mistakenly turned on the truck which crushed and dismembered him. Until we reached puberty, I had played with his children on the cotton plantation where his ancestors were enslaved.  I will never forget the sadness and despair on the faces of his wife and children at his funeral.  John’s death showed me the way to the civil rights movement in 1968 in Memphis and, ultimately, to this court room.

For today, the worldwide civil rights movement of the 21st Century is represented right here by the cruelty of Operation Streamline and a border policy of deterrence based on imprisonment and death.