Trade Efficiency and Border Security at Odds on the U.S. Mexico Border

Through technological fixes and greater collaboration, the U.S.-Mexico border prepares for a smoother interchange of goods, while becoming an even more dangerous barrier for everyday people. 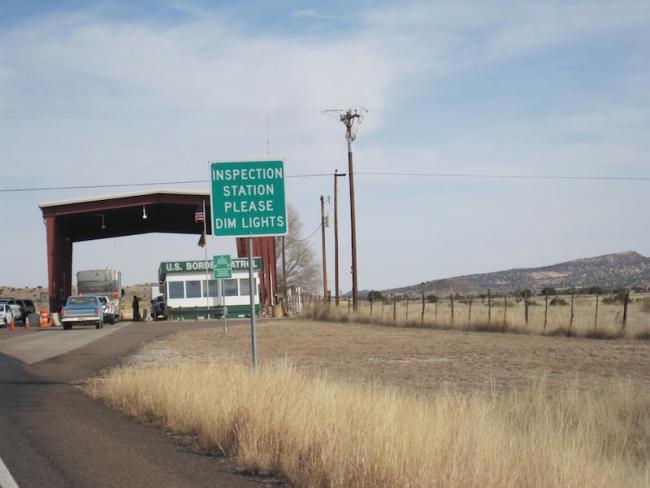 While Republican presidential candidates make outrageous statements regarding refugees, unauthorized migrants, and a supposedly under-resourced U.S. boundary policing regime, many pundits paint the Democrats as the party of reason. However, this simplified dichotomy, while no doubt reflecting certain truths and real disagreements, obscures how Republicans and Democrats are singing from the same hymn sheet with regard to a new reality for the policing of U.S. boundaries. This applies especially to the U.S.-Mexico border, and the movement of migrants moving northward from Central America and through Mexico and across the country’s divide with the United States, one result being ever-more dangerous barriers to human mobility.

The Obama administration made this clear at a recent conference on the U.S.-Mexico border in El Paso, Texas. As U.S. officials articulated at the “2015 United States−Mexico Summit: A View from the Border” gathering, the framework centers on two fundamental points. First, it sees the U.S.-Mexico boundary as a securitized site of economic interchange. Legitimate goods, services, money, and the ‘right kinds of people’ should move back and forth across the line with the most minimum interruption. Meanwhile, U.S. authorities will work to keep out illegitimate goods, money, services (not least drugs), and the ‘wrong kinds of people’. Second, the current framework will continue to involve the southward shift of U.S. boundary policing into the interior of Mexico.

Some rather large developments have been taking place towards these ends. A number of pilot projects are utilizing pre-inspection methods, whereby the Mexican government allows armed U.S. agents to inspect cargo within Mexico prior to its crossing into the United States. Pushed by the United States to reduce wait times for shipments, these test cases, if deemed successful, will pave the way for the implementation of such methods at other border points of entry (POEs).

At the El Paso conference, administration officials gave heavy weight to the importance of these projects. As one panel discussed a “vision” for North America based on continued integration— a seamless market with minimal interference or delay for legitimate cross-border traffic—William H. Duncan, the chargé d’affaires at the U.S. Embassy in Mexico City, exclaimed, “that is the vision.” He also noted that the pre-9/11 world of minimal security checks and short border wait times was, “not coming back.” Instead, the border would remain a security site, albeit a “smarter” one. Gil Kerlikowske, head of U.S. Customs and Border Protection (CBP), the parent agency of the Border Patrol, outlined a similar picture.

The cross-party consensus around such efforts is clear. Republican bashing of Democrats over the insufficient attention being paid to “border security” does not reflect the structural realities of U.S.-Mexican economic interdependence. Both Republicans and Democrats, for the most part, have searched for a magic bullet that would allow them to both police the border, and keep it open to economic interaction.

While the efforts to create a simultaneously business-friendly and heavily militarized boundary go back at least as far as the early to mid-1990s, what the White House now calls “smart borders” took on a new intensity in the aftermath of 9/11. Agreements with Canada, and then Mexico, sought to create frameworks that would further secure the border, but do so without adversely affecting free trade. A number of policies came to pass as a result. Importantly, this did not mean that the post-9/11, hardened border security regimes of increased staff, checks, walls, and division would melt away; rather, it only meant that they would affect commerce as little as possible.

The Obama administration updated these efforts in 2010, via a joint declaration with Mexico. Referred to as “Twenty-First Century Border Management,” this initiative has sought to deepen collaboration on border security and trade facilitation further still. In Mexico specifically, this notion of integrating trade and border security has become part of the Mérida Initiative aid package, as well as the High-Level Economic Dialogue.

Such endeavors illustrate that “establishment” Republicans are not protectionists by any stretch of the imagination. They seek a strong U.S.-Mexico relationship, with borders simultaneously open to trade, and closed to unauthorized immigration, terrorism, and trafficking. Even Trump, who has been strongly protectionist in his campaign, wants a door in his Mexican-funded fantasy wall so that “good” people can still enter the United States.

In this context, what might be called the NAFTA-land security project, whereby Mexico is pulled into the defense of the U.S. “homeland” and the NAFTA economic space, is crucial. Mexico is tasked with improving U.S. border security by tackling “threats” before they reach U.S. territory, thus further protecting the “21st Century border” that is heralded in the Mérida language. Its most visible human consequences are for Central Americans moving through Mexico. Spurred by the child migrant crisis in the summer of 2014, Mexico is now deporting migrants, refugees, and asylum seekers (the distinctions between these three categories are not clear cut) at record levels.

The United States is deeply involved in this effort, reflecting what cables obtained through Wikileaks suggest is the long-term aim of having Mexico participate fully in the U.S.’s border security regime. It seems very likely, for example, that U.S. pressure preceded the most active intervention by the Mexican state on this issue ever seen: Mexico’s Plan Frontera Sur. The result of U.S. collaboration and aid, that initiative has effectively cracked down on the movement of migrants from Central America. The efforts of the U.S. to integrate Mexico into its policing regimes for North America are in this way bearing fruit.

These efforts give the Obama administration the opportunity to crow about reduced unauthorized entries into the United States, but, tragically, human rights abuses at the southern border have occurred at shocking levels. A Washington Office on Latin America report indicates that migrants face intimidation, robbery, and sexual assault from Mexican state agents. The report also describes the routine denial of legal rights to Central Americans fleeing violence and persecution as they seek asylum and safety. In other words, the 21st Century border initiative’s “smartness” appears to rely on Mexico’s use of some pretty blunt instruments to screen for  unauthorized human traffic, long before individuals enter the United States’ sovereign perimeter.

This is the new reality of U.S. border security within the North American economy, and it’s a reality that will likely survive the racist zealotry of Donald Trump. The U.S. contiguous borders are set to remain permanently securitized spaces where “positive” interchange is facilitated while “negative” interchange – as defined by a U.S. state that considers immigration, drugs and terrorism its targets – is challenged and deterred. Mexico will act as a buffer space in this system, a policed territory for people desperately trying to escape violence and economic hardship.

Several participants at the El Paso conference gamely argued for a more socially just approach to 21st Century borders. Academics and activists with the Border Network for Human Rights and Annunciation House, for instance, advocated policies that would safeguard the rights of migrants across North America. Their proposals would downsize the border policing apparatus to a sane level, and recognize the cross-cultural reality of the continent through an engaged focus on civil society and people, rather than just a blithely expressed reliance on markets and economics to create positive change.

Unfortunately, for too many in official Washington, such policies are not even imaginable.

Paul Ashby is a Lecturer in Security Studies at the University of Texas at El Paso. His research focuses on the Mérida Initiative, Mexico's security crisis, and U.S. attempts to further integrate North America's political economy and security apparatus. Follow him on Twitter at @pash84.