Fighting Displacement in Barcelona and Beyond 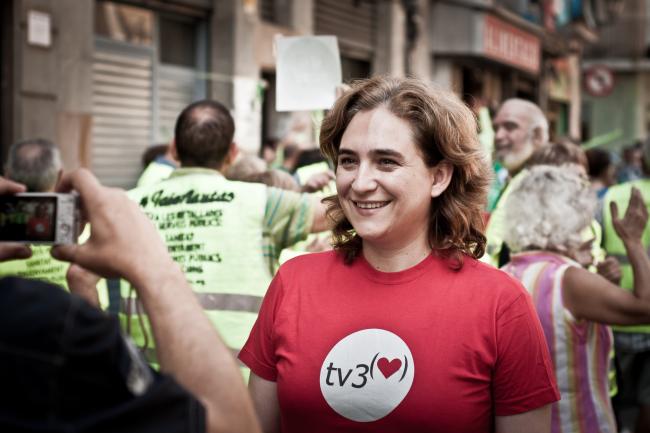 Spain's politics are begining to look a lot more like Latin America's. On December 20, the insurgent leftist party Podemos won 21% of the vote in Spain’s parliamentary elections, depriving incumbent conservatives of the majority they need to form the next government and upending the traditional two-party system that has dominated the political landscape for the past 40 years.

Podemos’s strong national showing builds on a string of local electoral victories last May, when progressive candidates with roots in the M-15 Indignados movement (the precursor to Occupy Wall Street) won control of four of Spain’s five largest cities, with Podemos’s backing. Some Podemos leaders, who draw political inspiration from Latin America’s “pink tide” leftist governments, see possible parallels between this trajectory and the evolution of Bolivia’s MAS party, which progressed from its grassroots origins through municipal government takeovers to become a powerful, integrated, nationally-popular “party of the social movements.” For Portuguese sociologist Boaventura de Sousa Santos, “Podemos is the end result of a learning process originated in the [global] south,” where popular movements have turned into governments.

At the epicenter of Spain’s local and national insurgency is Barcelona, a city with a long tradition of political and social struggle. At the outbreak of the Spanish Civil War in 1936, worker and neighborhood militias seized control of the city, collectivized most of its commerce, industry, and housing, and played a historic role in the resistance to Franco’s dictatorship. Eighty years later, a network of combative grassroots organizations and a newly-elected activist mayor are working to challenge national austerity policies and global real estate and banking interests in order to protect local residents from displacement, with parallels to recent urban movements in Brazil, Argentina, and elsewhere in South America.

Ada Colau became Barcelona’s first female mayor last May with the backing of Barcelona En Comú (Barcelona for All), a coalition of social movements and local political forces that topped the ticket in the municipal council election. Colau is a founder of the Plataforma de Afectados por la Hipoteca (Platform of People Affected by Mortgages - PAH), an extraordinary grassroots organization launched in Barcelona in 2009 that has mobilized hundreds of thousands in response to Spain’s housing and mortgage crisis.

The Housing Crisis and Mass Tourism

In 2008, the Spanish housing bubble burst in the wake of the global financial crisis, following a period of frenetic bank-fueled construction, land speculation, over-valuation of real estate, and the proliferation of sub-prime mortgages, financed indirectly by U.S. banks. In the ensuing recession, brought about by the draconian austerity policies of  successive neoliberal governments, housing values plummeted—but high unemployment rates left many homeowners without the means to pay their mortgages. Since the implosion of Spain’s real estate market, an estimated 650,000 homes have been subject to foreclosure and more than 400,000 families have been evicted.

While foreclosures have slowed in recent years with the partial economic recovery, forced evictions—now disproportionately targeting tenants—are on the rise.  Recent legislative changes have conveniently simplified the eviction process for non-payment of rent.

At the same time, former homeowners face continuing high debt burdens under Spain’s punitive mortgage laws, which dictate that only part of the debt is wiped out through foreclosure. The rest (plus interest, penalties, and court costs) remains as a personal liability. Unlike in the U.S., former homeowners can’t declare bankruptcy to escape this life-long debt, and may be blacklisted from buying a new home or car, or even from renting an apartment— a desperate situation which has taken a personal toll in the form of “foreclosure suicides.”

Worst of all, while tenants and homeowners struggle to keep a roof over their heads, a record 3.4 million homes and apartments (representing 14% of Spain’s housing stock) were listed as vacant in the 2013 census—the highest number of any European country. Most of these units are owned by banks.

The housing crisis has been especially acute in Barcelona, Spain’s second largest municipality, where evictions continue at the rate of 15 per day and more than 30,000 families languish on waiting lists for social housing. In this globalized port city, displacement is now driven largely by a tourist boom that has fueled speculative investment, boosted rents, and transformed stable working class neighborhoods into homogenized enclaves catering to more affluent and transient populations.

Over the past four years, tourism in Barcelona has increased by 18%, while the income gap between rich and poor city residents has widened by 40%. Barcelona is now the third most visited city in Europe, with new hotels—among the most expensive on the continent—opening at an average rate of 10 per year. Tens of thousands of once-affordable apartments are marketed to tourists through on-line platforms like Airbnb.

Lately, private equity firms and Wall Street hedge funds have been snapping up choice residential properties and mortgages in Barcelona and Madrid that are ripe for “repositioning.” New York City-based Blackstone—the largest vulture fund in the world, and the biggest buyer of foreclosed single-family homes in the US—recently purchased a massive portfolio of defaulted mortgages from the Catalonia Bank at bargain basement prices, following the bank’s bailout with public funds, putting thousands of families at risk of displacement.

During the past six years, the PAH has spearheaded the struggle against displacement and for the right to affordable housing in Barcelona and across Spain. Through a combination of mutual self-help, institutional pressure, and direct action—including civil disobedience such as eviction blocking and building occupations, where necessary—the PAH has succeeded in paralyzing more than 1,600 evictions and in rehousing 2,500 people. Organized through local assemblies with a participatory, horizontal structure, the PAH now has more than 200 affiliated chapters, located in every region of the country.

The PAH has also been successful in legislative advocacy. In July 2015, it pressured the regional government of Catalonia (where Barcelona is located) to adopt a popular housing initiative that represents a “paradigm shift” in the housing and mortgage system.

The law mandates an end to “debt for life,” allowing foreclosed homeowners to liquidate their remaining debts with the bank—including retroactively—and start afresh. It effectively imposes a moratorium on evictions, requiring large landlords and banks to concede a “social rent” to vulnerable homeowners and tenants for 3 years, and prohibits utility shut-offs for at-risk families.

The law also allows municipalities to fine owners who hold apartments vacant for more than 2 years, and, in some circumstances, to take over the units for temporary use as affordable housing. The PAH is now working to enshrine these principles into national law, and to make sure they are effectively implemented in Catalonia and, especially, under the new progressive regime in Barcelona.

While Ada Colau and the 10 other elected representatives of Barcelona en Comú campaigned on a promise to “win back the city and its public institutions,” and have pledged to “govern by obeying” their constituents, they do not control a majority on the city council. Still, they have amassed a significant record of accomplishments over the past 6 months, especially with respect to anti-displacement and housing initiatives.

In response to the demands of activist neighborhood groups that have occupied new luxury hotels and plastered Barcelona’s working class portside neighborhoods with anti-tourist graffiti, the city has declared a one-year moratorium on licensing for new tourist accommodations, halting 30 pending projects. A municipal council has been established to develop a new plan for sustainable tourism, with the participation of affected neighborhoods.

Under a pilot program for owners caught renting unlicensed tourist apartments through Airbnb or similar platforms, the city will forego 80% of the fine (which can be as high as €90,000) if the owner agrees to turn the apartment over to the city for use as social housing, for 3 years. Owners of some 330 short-term rentals have already been sanctioned, and are being pressured to participate.

Under continuing pressure from the PAH, the city is starting to crack down on banks with long-term vacancies. In an initiative aimed at halting sales to vulture funds, the city has declared its “right of first refusal” to match the purchase price of any bank-held home or apartment that is offered for sale after a two-year vacancy, and is in the process of acquiring a package of 17 units at prices that are considerably less than the cost of new construction.

Fines have also been levied against three banks for holding 12 properties vacant, with 62 more cases in process. Still, the PAH has publicly rebuked Ada Colau for not moving quickly to capture vacant bank-owned units for desperately needed social housing, as authorized by Catalonia’s new law.

In a precedent-setting action, the city recently announced that it will take over 200 units from SAREB, a government-owned company that manages the assets of four failed Spanish banks, for a period of eight years. Half the units are illegally occupied by squatters, whose tenancies will be negotiated. The city will pay a token monthly rent. Another 300 units will be transferred in a second phase.

The city is also directing banks to make vacant units available for refugee resettlement,  with municipal resources and support. This is part of an effort spearheaded by Ada Colau to create a network of Spanish “safe cities ” among the dozen or so municipalities with elected leftist governments (including Madrid, Valencia, and Zaragoza), to challenge the conservative national government’s anti-refugee stance.

Barcelona, Latin America, and Beyond

Clearly Barcelona is testing the limits of what can be accomplished at the municipal level to confront the anti-democratic politics of national and global institutions and actors.  It has provided a model for local anti-displacement and affordable housing strategies in gentrifying cities, and for reinventing urban democracy.

Barcelona’s experience also demonstrates how local demands can be scaled up through regional, national, and even international alliances. In the recent national elections, Barcelona en Comú joined forces with Podemos to run a winning slate of regional congressional candidates, while the PAH made its anti-displacement platform (endorsed only by Podemos) a central issue in the campaign. The PAH has spearheaded international mobilizations against Blackstone, joining forces with anti-eviction allies in the US, London, and elsewhere.

In Barcelona, social movements are engaging in electoral politics without seeming to compromise their autonomy or activist identity. Despite its participation in the Barcelona En Comú convergence and the prominent role played by activists like Ada Colau, the PAH has maintained its organizational independence and is not beholden to any political party (including Podemos, another member of the coalition). This is a welcome departure from recent Latin American experience, where independent social movements have been coopted, subsumed, marginalized, or crushed by successful leftist parties that have captured state power, such as the MAS in Bolivia.

A perennial question generated by the experience of Latin American social movements and leftist governments is whether the impetus for progressive change comes from inside the institutions, or from the streets. In Barcelona today, it seems that both strategies are needed, and are working. While Barcelona’s combative grassroots movements do not always see eye to eye with elected municipal officials or with Podemos party leaders, their relationships at the moment seem to be strengthening the progressive left, both inside and outside the political arena.  “There is a difference in what you can achieve in each framework,” says Ada Colau, “but they are both indispensable. For real democracy to exist, there should always be an organized citizenry keeping an eye on government—no matter who is in charge.”