Why Bolivian Workers Are Marching Against Evo Morales

The shutdown of ’s state-run textile company calls into question the alliance between President Evo Morales and the Bolivian Workers Central at a crucial political and economic juncture. 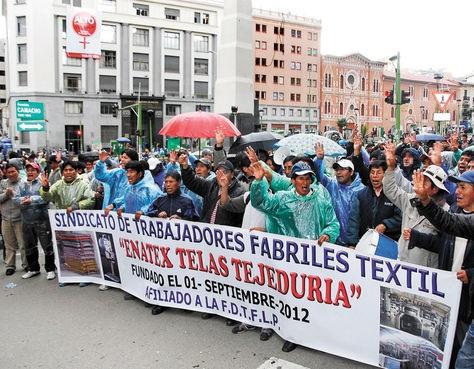 Over the past 2 weeks, thousands of factory workers, miners, teachers, and health care providers have mobilized and blocked roads in La Paz and Bolivia’s other departmental capitals to protest the firing of 1,000 state textile workers. The workers were abruptly dismissed last month, when Bolivian President Evo Morales announced the closure of Enatex, the state-run textile company.

In response, the Central Obrera Boliviana (COB or Bolivian Workers Central, the national trade union federation) demanded the workers’ reinstatement and called for an escalating national strike— the first in more than three years. Ramping up from 24 to 48 to 72 hours, the mobilizations have intensified along with the predictable police response, with thousands tear-gassed, hundreds arrested, and scores wounded.

Enatex was created in 2012, when the Morales government took over the failed textile manufacturer Ametex. It was a highly symbolic action, underscoring Morales’  commitment to protect Bolivian workers, nationalize strategic enterprises, and promote industrialization.

Four years later, the state company’s demise is equally symbolic. It casts doubt on economic choices made by the Morales government and on the viability of Bolivia’s industrial policy in the context of global economic constraints, especially those dictated  by U.S. trade preferences. It also calls into question the tactical alliance between Morales and the COB at a crucial political juncture for Morales and the ruling Movimiento al Socialismo (MAS, or Movement Towards Socialism) party, and at a time when the threat of austerity poses critical new challenges for Bolivia’s popular movements.

Founded in 1965 by Polish immigrants, Ametex was a successful Bolivian company—perhaps “the most modern private business in Bolivia,” according to the Fundación Milenio—that produced high-quality textiles for U.S. conglomerates like Tommy Hilfiger, Polo Ralph Lauren, and Nautica. At its height, Ametex employed 4,000 skilled workers in seven factories, at an average wage 135% higher than Bolivia’s minimum wage, and produced one million pieces of clothing per month.

The key to Ametex’s success was the Andean Trade Protection and Drug Enforcement Agreement (ATPDEA), a U.S. treaty that, from 1991-2008, allowed Bolivia to export textiles and other products duty-free to U.S. markets. Originated under the “War on Drugs,” APTDEA was designed to provide Andean producers with alternatives to coca production, and required annual certification of the country’s compliance with coca eradication targets.

In 2008, after Morales expelled the U.S. Ambassador (followed by the Drug Enforcement Agency) for allegedly assisting efforts by eastern lowlands secessionist elites to destabilize his government, the US retaliated by decertifying Bolivia from continued participation in ATPDEA. Ametex suffered massive losses and teetered on the brink of bankruptcy with substantial debts and liabilities, including to the state pension fund.

In the new “framework agreement” negotiated with the U.S. in 2011 to provide the basis for renewed diplomatic ties, Morales elected not to negotiate the restoration of tariff protections, in the interest of asserting Bolivia’s national sovereignty. After Ametex workers paralyzed downtown La Paz for several days, the government arranged a $2 million line of credit from the Bank of ALBA in an effort to keep the company afloat (on top of a previous $5 million loan designed to offset the new U.S. tariffs).

In 2012, after Ametex declared voluntary bankruptcy, the Bolivian government—with much fanfare—took over operation of its five remaining plants, assumed its $17 million pension liability, and ultimately purchased its assets for $15 million (to pay off creditors). Government officials pledged to secure replacement markets for Bolivian textiles in Venezuela and Brazil, and promised that Enatex would sell 30% of its output in the domestic market.

These promises did not come to fruition. Venezuelan and Brazilian markets proved to be unreliable, especially with the decline in commodity prices and resulting shrinkage of these economies. The “Buy Bolivia” campaign orchestrated by the Morales government to encourage consumers to purchase locally-made textiles was largely unsuccessful. Even with a drastic reduction of its workforce (down to the 1,000 remaining today), and a $69 million government investment over the past four years, Enatex, according to Vice President Alvaro García Linera, has never produced a profit and now faces growing debts and pension liabilities.

For García Linera, Enatex’s failure is largely attributable to structural changes in the global economy. The restructuring of textiles from a labor-intensive, factory-based enterprise to a highly technological computer-driven industry, he argues, has left Bolivia at a severe competitive disadvantage. With low productivity, high costs, and the inability to even produce its own cotton thread, Bolivia has seen its textile exports decline in value by 52% over the past 13 years, while textile imports (principally from China) have grown by 91% since 2008. It would be irresponsible, García Linera has said, for a socialist government to maintain a failed enterprise.

In response, Enatex workers and their allies blame the Morales government for allowing the domestic market to be undermined by cheap Chinese imports and illegal contraband, especially used clothes smuggled across the Peruvian border. Critics say the government packed the new state company with inexperienced but well-paid, MAS-affiliated administrators, while continuing to hollow out its workforce. According to Bruno Rojas of El Centro de Estudios para el Desarrollo Laboral y Agrario (CEDLA), a highly-respected Bolivian economic research organization, the government from the beginning lacked a vision of how Enatex could be sustainable.

A true pro-worker industrial policy, critics contend, would aggressively impede contraband, restrict or prohibit textile imports, and create a sustainable domestic market— for example, by commissioning uniforms for the military, police, health workers, and students. In contrast, Enatex workers and COB leaders charge that the shutdown is an anti-worker, anti-popular measure signifying a return to neoliberal austerity politics by an increasingly conservative MAS government, in response to the looming economic downturn. Symbolically, COB Executive Secretary Guido Mitma has characterized Supreme Decree 2765, which authorized the closing of Enatex, as the “evil twin” of Supreme Decree 21060, the infamous 1985 edict that shuttered the state-owned mines, privatized other state enterprises, and dislocated thousands of government workers.

The government responds that it is not privatizing or even fully closing down the state textile firm, but restructuring it as a technical support center for the industry — albeit with only 200 workers, whose labor will be governed by a regime that provides considerably weaker protections  Now that more than 80% of  Enatex workers have accepted severance pay, officials contend, the issue of reinstatement is moot.

While Morales insists that the decree will not open the door to further public sector layoffs, he appeared in mid-June to announce the closing of Ecobol, the deficit-ridden state postal service that currently employs 700 workers. Workers say the government has undermined its own enterprise by continuing to use private mail services. The announcement was quickly walked back by cabinet officials, who are meeting with postal workers to discuss restructuring options.

Defying rumors that the state-owned mining sector, plagued by falling mineral prices, will be next on the chopping block, Morales in mid-June committed a $36 million loan to Huanuni, its flagship tin mine and Bolivia’s largest. Perhaps not coincidentally, this strategic action effectively neutralized a key COB affiliate on the eve of the strike.

Does Enatex represent a unique situation, or does it foreshadow a new era of austerity politics in Bolivia? To date, the impact of the global decline in commodity prices has been blunted by the economy’s continued growth, and the availability of substantial reserves which Morales has diligently accumulated. The official government strategy calls for continued pursuit of the Patriotic Agenda 2025, an ambitious program of accelerated public and private investment in infrastructure, energy, hydrocarbons, and industrialization to diversify the economy and bolster internal demand.

Still, the warning signs are inescapable. In June, Moody’s derailed a new bond offering for hospital construction, citing Morales’s refusal to cut government spending even as government revenues have declined by $6 billion in the past 2 years.  Budget deficits are expected to reach a 13-year high in 2016. Government debt, at 37% of GDP, is more than double its 2014 levels, causing significant investor concern.

This past May 1,  in keeping with tradition, Morales announced minimum wage and public sector salary increases of 9% and 6% respectively, well ahead of inflation. He also confirmed that the double end-year bonus (doble aguinaldo), which companies have been required to pay since 2013 when economic growth hits 4.5%, will continue. At the same time, for the first time in his ten-year administration, he imposed a freeze on retirement pensions and conditional cash benefits for the elderly, pregnant mothers, and schoolchildren, among the most vulnerable popular sectors.

The COB and the GOB

The May 1 compromise package was negotiated with, and fully endorsed by, the COB, which for the past 3 years has supported the Morales government in a strategic alliance. Previous relations between the two sectors were often stormy, with the COB leading popular mobilizations against government fuel subsidy cuts (the 2010 Gasolinazo), limited wage increases (2011), repression of the TIPNIS marchers (2011), and proposed pension reforms (2013). The COB even supported the formation of an independent workers party to challenge Morales's re-election in 2014. .

However, at the end of 2013, the COB, under new pro-MAS leadership, agreed to back Morales in exchange for the legally-mandated doble aguinaldo and the Agenda Patriotica, promising continued economic expansion and jobs. In October 2014, 15 COB leaders were elected to the Plurinational Assembly on the MAS ticket. Last February, the COB actively supported Morales’s failed referendum bid for a fourth presidential term in 2019..

Despite erroneous reports in the western media, the COB has not formally broken with the government. Still, the Enatex controversy has strained its relations with Morales virtually to the breaking point, with escalating rhetoric on both sides. The COB leadership is exploiting the threat of a split to maximum advantage, and has pointedly refused to align itself with the MAS-affiliated social movements’ call for a repeat referendum.

A rupture with the COB would be highly symbolic and detrimental to Morales at this political juncture. In the wake of his referendum defeat, Morales needs the COB to help restore his credibility, and that of the MAS party, outside of their traditional rural peasant base.

Still, the COB—once the vanguard of the most combative trade union movement in Latin America, and perhaps the world—is today a shadow of its former self, with only 30% of Bolivia’s labor force engaged in the formal economy.  And while the COB disputes the government's claims of minimal strike participation, it’s unclear how many of its affiliates have actually joined in the mobilizations.  In its currently weakened state, the COB may be equally in need of maintaining its strong relationship with the government.

At this writing, the COB leadership is in negotiations with top government officials. Discussions are focusing on additional benefits for laid-off Enatex workers with special needs, a prohibition against the closing of additional state enterprises, and guaranteed retention by Senatex of the 180 workers who have not accepted severance pay, with full labor protections. The outcome could be critical in shaping Bolivia’s post-referendum political landscape, and in prefiguring how Bolivia's popular movements will fare in responding to the coming austerity challenges.