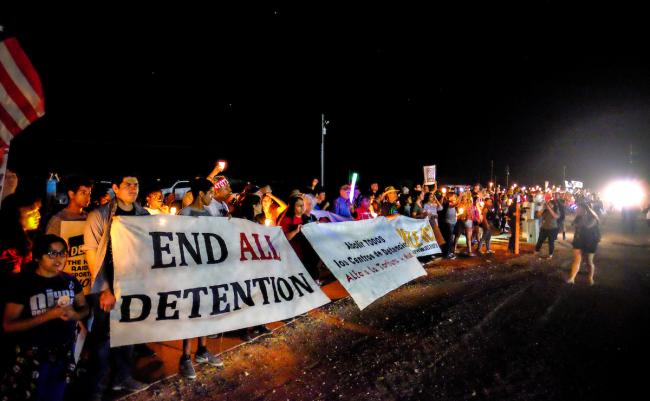 In August 2016, the Department of Justice (DOJ) announced that it was rethinking its use of private contract prisons that incarcerate a segregated group of immigrants. The DOJ decided that it would permit the contracts to expire, eventually halting the use of for-profit jailers in this particular subset of the federal prison system. For persons concerned about prison privatization, this was welcome news, inspiring hope for a wider riddance of corrections corporations in the prison system. However, despite their notoriety and the great deal of agitation against them, private prisons are drops in the bucket of the sprawling U.S. penitentiary system. As well, the decision to cut back on for-profit prisons at the DOJ fails to address a much larger problem: the Department of Homeland Security's (DHS) extensive migrant detention regime.

Many tout the scathing analysis of investigative reporters as the central reason behind the DOJ's decision. Seth Freed Wessler's 2016 series in The Nation about "immigrant-only" prisons raised alarm bells about the deadliness, corruption, and secrecy at the intersections of criminal justice and immigration enforcement. Wessler zeroed in on medical care at the Bureau of Prisons' (BOP) eleven privately run Criminal Alien Requirement (CAR) prisons and found striking abuses and high rates of death—a total of 137 persons died in the CAR prisons between 2008 and 2014—that resulted directly from medical neglect.

The critical analysis, however damning, and the decision to end privatized BOP prisons, however promising, is limited to just one of the cottage industries built around incarcerating immigrants. The segregated, immigrant-only prisons are not migrant detention facilities—they are for federally convicted prisoners who are also noncitizens. Unlike prisoners, detainees are administratively confined—meaning, detained simply to facilitate their removal—triggering far fewer protections, but still subject to prison conditions. The DOJ's decision, therefore, does not affect the DHS's swath of privatized detention centers, where corrections corporations have a much larger footprint, incarcerating over half of migrant detainees.

For its part, the DHS followed the DOJ's decision by initiating a review of its unparalleled reliance on private detention to "evaluate whether this practice should be eliminated." Given the DHS's cozy relationship with the private prison industry, most advocates are skeptical of the forthcoming review. In the weeks that followed, the DHS extended the contract for the largest facility in the nation to 2021. ICE director Sarah Saldaña has also warned against turning away corrections corporations, fearing the potential upheaval because, unlike the prison system, detention centers "are almost completely contractor-run."

If the horrifying conditions at CAR prisons justify their reduction, then shuttering migrant detention centers should be a no-brainer as well, especially when you consider their similarities. Nearly all CAR prisoners are future migrant detainees who will be placed in deportation proceedings at the conclusion of their sentences. CAR prisons carry the same perils and usually the same prisoners/detainees as the detention regime does. Together, they represent a one-two punch, criminalization accompanied by prison followed by detention and deportation.

A single "crime"—usually unlawful entry or re-entry—can initiate a migrant's imprisonment and later detention. Prosecutions of crossing the U.S. international boundary line without authorization are on the rise and suspect. They represent an unrecognized form of double jeopardy for migrants and double profitability for private jailers. Over half of all federal prosecutions in 2013 for example, were for entry and re-entry, and in the border districts of Arizona, New Mexico, and Texas, this figure is over 80 percent, according to the ACLU. Prior to the Bush and Obama era Operation Streamline—which criminally prosecutes unlawful border crossers—persons caught for unlawful entry were not prosecuted, but returned quickly and rarely deported formally. In other words, CAR prisoners are purely an invention of criminalization practices, and the private prison industry capitalizes handsomely.

The substandard and dangerous medical care identified by Wessler is also a common feature of the larger landscape of immigrant incarceration and detention centers nationwide. This landscape includes a migrant detention regime with 250 public and private facilities peppered throughout the nation, jailing 37,500 people each day and over 400,000 annually in recent peak years.

Detention facilities hold undocumented migrants, legal permanent residents, asylum seekers, and growing numbers of children. Larger in scale than the BOP's migrant-only prisons, this system reflects the same outrageous conditions of confinement, unnecessary and preventable deaths, in addition to the incarceration and emotional harm of child detainees. Like CAR prisons, many of the migrant detention conditions are guided by a system of substandard standards and weak or absent oversight by federal officials. The oversight system effects little accountability (often protected by various levels of legal indemnity) but vast amounts of institutional legitimacy for a carceral regime that operates in the shadows.

National standards for migrant detention are recent inventions of immigration enforcement. So too is government accounting for deaths of migrant detainees. Instead of ushering in an era of increased safety and humane conditions, "improved" detention standards have signaled a new period of futility as they are implemented haphazardly, oftentimes unenforced or legally unenforceable, and replete with loopholes reducing them to benchmarks and mere suggestions for prison operators. For example, small non-federal facilities holding less than fifty detainees—which represent half of all facilities—are permitted to self-assess and are not subject to annual audits that determine contract renewal. As well, local county and city jails are permitted to sub-contract to private corporations who in turn can "adapt" or "establish alternatives" to the standards' various components, according to a report by the National Immigrant Justice Center.

Whereas the oversight system is designed to present a sense of order, scrutiny, and accountability among government jailers and its subcontractors, noncompliance and repeated abuses are persistent and largely without consequence. The present system of standards, audits, and oversight is a systematic failure, usually rubber-stamping the most dangerous facilities with approval. Detention centers with concentrated deaths, high rates of assault or suicide attempts, or other hazardous conditions regularly receive passing grades from the auditing process, according to the same report.

The reluctant implementation of stringent and enforceable detention standards that prioritize the well-being of administrative prisoners, if it were to happen, would be one small step—a baby step really—toward improving conditions for detainees. But the private prison industry flexes its muscles in this arena, slowing reforms, lobbying politicians, and seeking increased revenues for escalations in standards. For example, according to the Government Accountability Office, it is "more efficient and cost effective" to ask that facilities adhere to more stringent inspection processes than to "open negotiations for the entire contract" during which the private facility can request higher per bed fees. Reflective of the industry's negotiating leverage, recurring presidential administrations have blocked enforceable detention standards arguing that such protocols and "rule-making would be laborious, time consuming and less flexible." In a similar way, a cessation of DHS's heavy reliance on the private corrections industry would also be an important but sluggish reform, as multiyear contracts would likely expire slowly, one-by-one.

Better federal oversight and a transition to all-federal detention facilities are not magic bullets, as federally run detention centers, much like their local and private counterparts, are persistently sites of physical and emotional danger, neglect, and mistreatment. About one third of the 140 deaths in immigrant detention between 2003 and 2010 occurred in federal service processing centers or Bureau of Prisons lockups.

While it's unclear what an incoming President Trump will do with the innards of the detention regime, his edicts and pompous assertions suggest an expansion of the system which could only be accomplished with an even larger partnership with corrections corporations.

As such, a move away from for-profit detention in the waning days of the Obama administration would thus mirror the futility and mathematical insignificance of shuttering CAR prisons. Instead of scratching the surface of the migrant detention regime with minor reforms and institutional procrastination, Obama's DHS should scrap the detention regime all together, utilize the existing alternatives to detention, and rethink the reputed necessity to incarcerate migrants for administrative purposes. Immigrant advocates too must find a way to balance the pragmatic goals of improving detention conditions with the vision of ending the system altogether.

David Hernández is an assistant professor of Latina/o Studies at Mount Holyoke College.