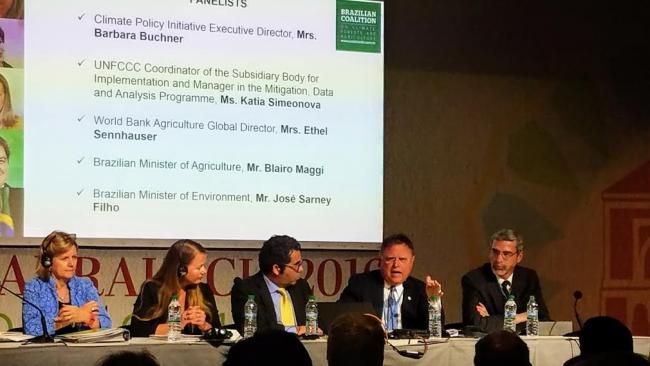 The government of Brazil would have liked this month’s Marrakech Climate Change Conference (COP22), to provide a venue to boast about their past environmental accomplishments and reassure the world of their ongoing commitment to the environment despite the country’s recent political turbulence. Instead, Brazil’s Minister of Agriculture, Blairo Maggi, faced a barrage of criticism from civil society over the country’s commitment to combat climate change and protect the environment. Although just a few years ago, Brazil was held up to the world as an environmental success story, the situation has recently taken a turn for the worse.

Since the early 2000s, Brazil has developed an enviable environmental reputation. This was largely the result of its remarkable success combating deforestation. From around 2004 until just a few years ago, Brazil reduced its deforestation rates by more than two-thirds. This achievement earned the country a steady stream of praise from environmentalists and led to its use as an example of a country that is taking climate change and environmental protection seriously. It was in this context that Brazil made a national commitment to combat climate change ahead of the Paris Climate Summit in 2015 and received accolades due to the inclusion of its goal to reach zero illegal deforestation by 2030 in the Brazilian Amazonia.

Government support for environmental protection has also waned in recent years, which can be seen in some of Brazil’s recent appointments to government posts that play key roles in protecting the environment. Two notable examples include Aldo Rebelo, a climate change skeptic, who served as Minister of Science and Technology (a ministry the current government is actively undermining) in 2015, and the appointment of Katia Abreu, also known as the “chainsaw queen,” and “Miss Deforestation,” to lead the Ministry of Agriculture, in 2015. Under the Temer government, neither currently hold these posts, but their appointments are illustrative of the government’s lack of dedication to environmental protection.

This trend has continued under the Temer administration. The current Minister of Agriculture, billionaire farmer Blairo Maggi, represented Brazil in his official capacity at COP22. Prior to his appointment, Minister Maggi was known as the “soya king” for being one of the largest producers of soybeans in the world. He is also remembered for having been awarded a golden chainsaw by Greenpeace in 2005 for his outsized contribution to deforestation in Brazil as the state governor of Mato Grosso. Under his administration, deforestation surged in the state, and from 2003 to 2004 accounted for almost half of all deforestation in the country. To be fair, he later earned grudging respect from some environmentalists when he reduced those rates. Nonetheless, his recent sponsorship of a proposed constitutional amendment (Proposal 65) that would largely eliminate the licensing requirements for large infrastructure projects, such as dams and mines, has left few with any illusions about his concern for the environment.

The government has no interest in being seen as going from country that was regularly referred to as doing more for the climate than almost any other country in the world to one that is a major contributor to climate change and not doing its fair share to reduce emissions. But members of civil society at COP22 saw through the façade the Brazilian government was projecting and continuously questioned it.

As one might imagine, given his background, the member of Brazil’s delegation most targeted by civil society was Blairo Maggi. Environmental activists at the conference repeatedly challenged Maggi on the frequent assassinations of environmental activists in Brazil. During the Global Landscapes Forum (GLF), a daylong event held during COP22, Niria Garcia, a member of the SustainUS delegation, 13 climate youth climate justice leaders from the U.S., asked how Maggi could use the word “harmonious” to describe the situation regarding enforcement of environmental laws in Brazil when over 150 activists have been killed in the last few years. As one might expect, Minister Maggi mostly ignored the question, only trying to clarify that he didn’t mean to depict everything in the country as being harmonious while reiterating that the situation in Brazil was in fact very positive.

At a side event put on by the Brazilian Coalition on Climate, Forests, and Agriculture later that week at COP22, a Brazilian audience member challenged Maggi again on the topic of the killings of environmental activists, but this time took a step further. He also asked about the recent spikes in deforestation, the influence of the agribusiness lobby, and the ambitiousness of Brazil’s climate commitment. Minister Maggi decided not to substantively respond to the comment on the deaths of environmental activists, but instead responded flippantly, calling out questioners for their inconsistent use of numbers. He stated that at the GLF he had been told that 150 environmental activists had been killed, but that the following day, that number had changed to 50, so he was happy to hear that those other 100 activists didn’t actually die. In fact, the figures cited by activists had referred to different durations of time – but this did not seem to bother Minister Maggi.

Maggi didn’t provide any straightforward responses, but his answers reveal why many are concerned the government is not dedicated to improving the country’s environmental situation. First of all, he ardently defended the ambitiousness of Brazil’s climate commitment—despite the fact that Climate Trackers analysis has found that Brazil isn’t doing its fair share— and tried to downplay the power of the agribusiness lobby, claiming that “we have a lot of money, but we’re not rich.” During this same event, another audience member confronted Maggi about the role of corruption on environmental destruction in Brazil. Despite Minister of Environment José Sarney Filho’s comments that recent increases in deforestation were related to the political turmoil in Brazil, Minister Maggi stated that corruption was “not something we should talk about here at the COP.”

The finishing touch on Minister Maggi’s interactions with civil society came after the Brazilian Coalition event, when a group of Brazilian youth from the NGO, Engajamundo, entered the room and ceremoniously bestowed the Minister with a pearl necklace. “Pearls in Brazil are referred to when someone says a lot of stupid things that make no sense,” one of the youth group’s members told me. “And that is exactly what the Minister has been doing at the COP, particularly when he declared that the death of 50 environmentalists per year is a very low rate.”

Evidence from the conference and beyond strongly suggests that the country is taking a turn for the worse when it comes to protecting both environmental defenders and the environment more broadly. The new Brazilian government came to COP22 hoping to continue to prop up its image—already weakening under Dilma Rousseff’s government—as a strong actor on behalf of the climate.

While Brazil’s worsening environmental outlook is worrisome for many reasons, perhaps it is most sobering from a climate perspective. As the UN Emissions Gap Report made clear, even with the pledges made under the Paris Agreement, the world is currently on track to see a disastrous temperature rise of between 2.9 and 3.4 degrees Celsius. When deforestation is taken into account, Brazil is one of the world’s main contributors to this temperature rise. Add to this that one of the other largest emitters, the United States, has just elected a new President who is likely to increase fossil fuel production and reduce the U.S.’s contribution to international cooperative efforts to address climate change. Given these circumstances, it is critical that Brazil does its part and plays a leadership role within the region to help the world avoid the worst consequences of climate change and limit global warming.

Orion Cruz is a lawyer who focuses on environmental law and policy, human rights, climate change, and Latin American affairs. He received his J.D. from Lewis and Clark Law School and has a master's degree in environmental policy from Vermont Law School.