The Growing Resistance to Megadams in Bolivia 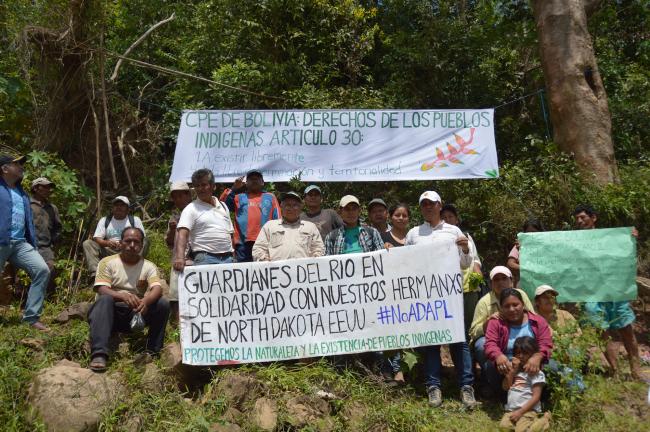 Last November, representatives of 17 indigenous communities held a vigil at the site of two megadams—El Chepete and El Bala—that President Evo Morales plans to build in Bolivia’s Amazonian region. The protesters blocked access to the site by Geodata, the Italian firm hired by the government to study the dams’ feasibility. Twelve days later, Geodata’s engineers withdrew their equipment, announcing, “If there’s no [community] consensus, the conditions don’t exist for us to work.”

The episode represents a small but important victory for indigenous groups, environmental activists, and civil society organizations that have resisted construction of the dams for several years.  It also poses at least a symbolic challenge to Morales’s stated goal of converting Bolivia into South America’s leading energy powerhouse, primarily through the production and export of hydroelectricity—with potentially devastating social, environmental, and economic consequences for Bolivia.

The two dams, proposed to be completed over next 10-15 years, will be located north of the capital city of La Paz on the Beni River, which divides the La Paz and Beni departments. With the combined capacity to generate 3700 mw (megawatts) of electricity, Chepete/ El Bala will be Bolivia’s largest hydropower source, and one of most significant megadam projects in the region.

Since Bolivia already has the capacity to produce the electricity it needs for domestic use, the energy generated by the new dams will be used almost exclusively for export, primarily to neighboring Brazil and Argentina. In fact, Chepete/ El Bala is the centerpiece of the Morales government’s ambitious $27 billion program to develop 35 hydroelectric plants (including 23 megadams) throughout the country by 2025, that will generate 11,000 mw of electricity, including at least 8,000 for export.

According to Vice President Alvaro García Linera, this strategy is the key to diversifying Bolivia’s economy, which historically has been heavily reliant on natural gas exports. With its gas reserves dwindling and hydrocarbons prices plummeting, García Linera argues, Bolivia must shift its energy matrix not only to generate cleaner energy sources but to develop alternative export products to secure its economic future. Underscoring this new focus, the Morales government has created a new cabinet-level Energy Ministry to oversee the generation and export of electricity, as well as the development of lithium and, potentially, nuclear energy.

The Morales government revivied the long-dormant plan for Chepete/El Bala in 2007, with a Supreme Decree declaring the project a national priority. Geodata completed a preliminary feasibility study in 2015. In July 2016, a second contract for more detailed design feasibility was awarded to same firm, to be completed in 15 months, leading to the exploratory testing that has now been suspended.

While no formal environmental impact study has yet been commissioned, critics say the project will have devastating social and environmental consequences.

Pablo Solón, former UN Ambassador and climate change negotiator for the Morales government, and a leading opponent of the project, says the dams will inundate an area larger than the city of La Paz, creating the second biggest lake in Bolivia after Lake Titicaca (now that Lake Poopó has dried up). Some 4,000 inhabitants of indigenous Amazonian communities (including Tsimanes, Tacanas, Mosetenes, and Uchupiamonas), who have relied on the river and forest for subsistence for generations, will be directly or indirectly displaced.

The affected zone includes portions of the Pilón Largas and Madidi National Parks, home to thousands of rare plant and animal species and one of the world’s most biodiverse regions. Critics say deforestation caused by the dams will release enormous quantities of greenhouse and toxic methane gas, accelerating environmental disequilibriums and the negative impacts of climate change, not only in Bolivia, but throughout the region.

The environmental damage will also stifle tourism in the two parks, which receive some 30,000 visitors (domestic and foreign) annually. Much of this ecotourist industry is run by indigenous communities, generating up to $15 million in yearly revenues for community economic development initiatives.

What’s more, according to Solón and Pablo Villegas, a principal economic investigator with CEDIB (the Bolivian Center for Information and Documentation), it’s not at all clear that the Chepete/ El Bala project is economically beneficial or feasible. The Morales government’s projected costs for the dams ($6.3 billion), they note, do not include the necessary transmission pipelines to Brazil, which will add another $3 billion according to CEDIB's calculations. Even without these additional costs, the project represents the largest single energy-related investment in Bolivian history, amounting to 1.5 times the current external debt, with financing sources still undetermined.

While the government argues that the sale of electricity from Chepete/ El Bala will generate $1.25 billion annually, allowing it to recover its investment in five to seven years, Solón and Villegas say these claims are purely speculative. No contracts have yet been signed with Brazil or Argentina. Leaked data from the preliminary feasibility studies--which have not been fully disclosed to the public--suggest that the projected price of electricity needed to amortize the high cost of the dams will far exceed the price currently paid by Brazil for domesticaly generated electricity in the regions closest to Bolivia.

Not only Brazil, but also Chile, Paraguay, and Peru already have or are developing extensive renewable energy systems based on hydro, thermal, and solar power, that can satisfy domestic needs more cheaply than imported energy. In effect, Solón argues, the Chepete/ El Bala megadams reflect an obsolete, 20th century energy development and export model that is no longer economically viable in the region.

Most recently, the Morales government has sought to promote Chepete/  El Bala as a solution to the water emergency in La Paz, where rationing has been in place since November. “We must build more dams to prevent water shortages,” Morales asserted in December.

Environmentalist Silvia Molina, among others, has been quick to point out that Chepete/ El Bala is not designed to collect water for domestic consumption, but only to create energy for export. Moreover, further disruption of Bolivia’s rain cycles due to dam-related deforestation will only exacerbate the water crisis in a country that is now experiencing its worst drought in 30 years.

A major concern of groups opposed to the dams has been the government’s failure to seek the prior, informed consent of affected indigenous communities, in good faith, as required by the Bolivian Constitution and international conventions to which Bolivia subscribes. Initially, ENDE, the state energy company, took the position that a consulta was required only for proposed hydrocarbons projects.

Last year, Bolivia's national energy company, ENDE, has promised to carry out a formal consulta in the affected zone, but only after the design of the dams has been elaborated and the environmental impact study completed. At the same time, García Linera has vowed that the government will ignore opponents of the project, whom he dismisses as externally-funded agents “paid to impede Bolivia’s development and foment water shortages.”

If local opposition to the dams persists, Morales says he will seek a department-wide referendum in La Paz, which he is confident will support the project. La Paz Governor Félix Patzi—a somewhat unpredicatable indigenous former Minister of Education in the first Morales government, who was elected on a rival center-left party ticket—has endorsed the project, hoping to capture a significant share of hydropower profits for his department’s use. As a further incentive to Patzi, García Linera has openly warned that La Paz’s economic and political leadership will be “at risk” if Chepete/ El Bala does not proceed.

For their part, indigenous groups in the affected zone, represented by the Amazon Defense Coordinating Committee (the “Coordinadora”), reject the newly-promised consulta as “too little, too late.” They are planning a popular initiative to challenge the project legally before Bolivia’s Constitutional Court.

At the same time, the Coordinadora has proposed a national referendum on the Chepete/ El Bala megadams. “The problem of the dams is not only ours, but a problem for all Bolivians because these national resources belong to all of us,” says leader Valentin Luna. “And who will pay this multi-million dollar debt? How strategic is this project when the world is going in another direction?”

For many, the current struggle over Chepete/ El Bala evokes bitter memories of the  2011-12 TIPNIS conflict, when indigenous, environmental, and other popular sectors broke with Morales over his plan to build a highway through protected indigenous lands elsewhere in the Amazon. It was a watershed moment in Bolivia’s contemporary political history, bringing into public focus for the first time the costs of Morales’s extractivist development model, and marking a realignment of popular forces into pro- and anti- government factions which persists to this day. 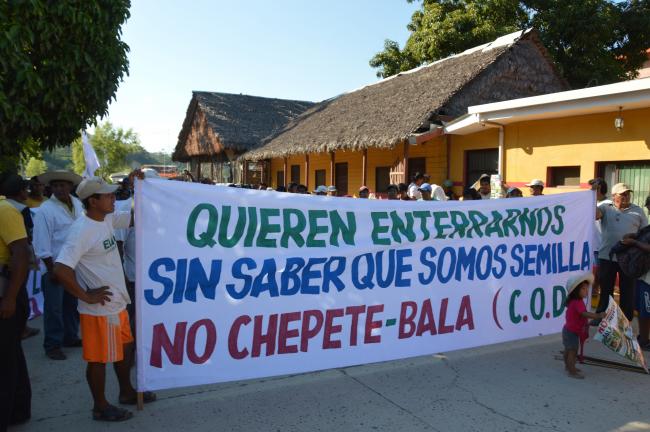 While the government appears to have learned few lessons from the TIPNIS controversy, activists like Pablo Solón are encouraged by the new and growing resistance to megadams. In contrast to the TIPNIS case, he notes, Chepete/ El Bala has provoked widespread debate about alternative economic models—in this case, for alternative energy—in academic, political, and social movement circles. “El Bala will be the funeral of the megaprojects” that have preoccupied the Morales government, he predicts.

Bolivia is already investing in decentralized and truly environmentally-friendly energy solutions, such as a new $100 million, 50 mw solar plant in Oruro that will cover half of the department’s energy needs. Solón envisions a massive government-funded solar program (along with small-scale wind, thermal, and micro-hydropower initiatives) that could make Bolivia not a regional energy powerhouse, but a regional model for decentralized, locally-based, and government-supported alternative energy. Similar networks of government-assisted, community-based agroecology, agroforestry, and ecotourism projects also exist and are ripe for expansion.

Groups in the forefront of the current resistance to megadams, such as the Coordinadora, appear to have a broad structural perspective that goes well beyond local concerns. A recent youth mobilization in defense of earth and water, organized simultaneously in La Paz, Cochabamba, and Santa Cruz, focused on the relationship between extractivism, water shortages, and the proposed megadams, and emphasized the need for alternative development strategies.

In the words of the ever-optimistic Solón, “Another Bolivia is possible.”

Watch the documentary by Theresa Edwards on the indigenous resistance to Chepete/El Bala below: