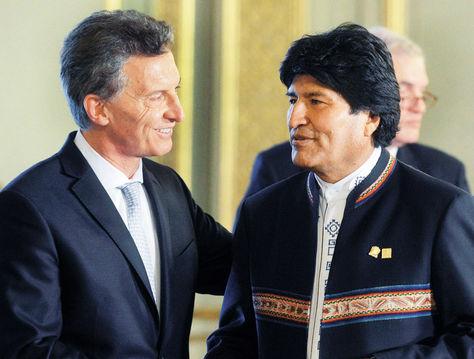 A recently-elected president—a billionaire and former real estate magnate—issues a controversial order cracking down on migrants who seek to enter the country and making it easier to deport foreign nationals. Congressional allies call for a border wall and a special immigration police force.

This isn’t Trump’s America, but Argentina, where President Mauricio Macri’s recent immigration decree has ignited a fierce national debate and raised regional diplomatic tensions—especially with neighboring Bolivia, which has one of the largest immigrant populations in Argentina.

Under the emergency decree, promulgated on January 30, immigrants can be deported or barred from entering Argentina not only if they have committed a major crime, but also if they have been accused of virtually any criminal offense, even if not yet convicted. This includes, for example, minor infractions such as selling illegal merchandise in the street, or participating in a road blockade or land occupation. Argentinian judges and prosecutors are now legally obligated to report such criminal charges to immigration authorities, paving the way for expulsion.

What’s more, the deportation process has been modified to bypass the courts, circumvent due process rights, and expedite the timeframe for removal. A special detention center has been established in Buenos Aires where accused migrants will be held in custody, pending deportation. A new National Border Commission will crack down on entry by suspected criminals.

The emergency measures are ostensibly designed to curb a rising wave of drug-related crime, which the Macri administration has linked to the influx of predominantly indigenous and poor migrants across Argentina’s northern border. Government officials point to statistics showing that 22% of Argentina’s federal prison inmates, and 33% of those imprisoned for drug trafficking, are foreign nationals. According to Security Minister Patricia Bullrich, “Many Paraguayan, Bolivian, and Peruvian citizens act as investors, mules, or drivers, or as part of a [supply] chain in the world of drug trafficking.”

The allegations prompted an angry response from Bolivian President Evo Morales, whose country sends more immigrants to Argentina than anywhere else in the world.  “These discriminatory policies that condemn migration and blame it for crime, drug- and people-trafficking, [and] terrorism…are a shameful regression in the face of the rights conquered through the struggle of our peoples,” Morales charged. “Brother Latin American presidents, let us be a great homeland; let us not follow the migratory policies of the north.”

The new decree has unleased a wave of xenophobia against Bolivian immigrants in Argentina. Since its promulgation, numerous raids have been carried out in immigrant neighborhoods and at bus terminals in Buenos Aires. Immigrants have been held for 12 hours while their backgrounds are investigated, striking fear into communities where Bolivian families have lived, in many cases, for decades.

Argentina's fraught and sometimes contradictory relationship with immigrants and indigenous peoples has been central to its history. The 19th century "wars of conquest" killed off most of the native indigenous population. In the early 20th century the government welcomed millions of European migrants to help populate and develop the country, associating immigration with economic prosperity. An estimated 79% of Argentinians today—including Mauricio Macri—are descended from European immigrants.

Since the late 20th century, strong demand for unskilled low-wage labor has made Argentina a regional magnet for economic migrants, especially from poorer nations in the Southern Cone. Historically, Bolivians, Paraguayans, and other migrants have occupied niches in the labor market that Argentinians are unwilling to fill, in food processing, textiles, and more recently in the informal service economy. These darker-skinned immigrants have periodically faced intense xenophobic campaigns from the national and local government as well as labor sectors, especially during economic downturns when they have been scapegoated for rising unemployment, social welfare costs, and crime.

Under the notorious “Videla Law” of 1981, immigrants from Bolivia and other border nations were regarded as a threat to Argentina’s national security and treated as criminals. The law created a vast population of unauthorized workers who were subject to intense exploitation by factory and agribusiness owners, while their families were denied health, education, and other social benefits.

Twenty years later, after pressure from immigrant and human rights organizations, as well as other South American nations, a 2003 law recognized immigration as a democratic, human right and allowed immigrants from neighboring countries to live and work freely in Argentina. It granted migrants universal access to education and health care, free legal representation, and a right to family reunification.

The new law, supplemented by “free transit” agreements among the Mercosur (Free Market of the South) nations (Argentina, Brazil, Paraguay, Uruguay, and Venezuela, plus allies Bolivia and Chile), has been lauded by the UN and international migrant rights organizations as a model approach to “open borders.” For the past 13 years, it has regularized immigration flows and provided a steady stream of low-wage workers for Argentina’s growing economy, while encouraging immigrants to pay taxes in exchange for legal protections. In 2016, Argentina received the largest number of immigrants of any country in South America.

To be sure, Bolivians and other poor, indigenous migrants have continued to experience the effects of ethnic, racial, and class discrimination in Argentina’s highly stratified economy and society. An estimated two-thirds of Bolivian immigrants in Argentina still live and work “off the books,” often under precarious and exploitative conditions. Recurring fires at clandestine garment factories—including one in 2006 that killed six Bolivian immigrants—highlight the persistence of illegal sweatshops and the need for improved government efforts to legalize undocumented workers.

Still, Macri’s new decree, along with the inflammatory xenophobic discourse that has accompanied it, has inaugurated a new repressive chapter in Argentina’s immigration history. The real purpose, many argue, is to distract attention from the failing economy, a year after Macri was elected, promising growth from market-friendly economic policies.

“The real problem is the economic crisis,” says Juan Vasquez, a Bolivian activist in Argentina.” The textile sector, where most Bolivians work, is in a bad way because the country is opening up to imports. All the workshops are breaking the law to some extent. Now they can expel you for whatever reason.”

Others see the measure as a strategic political ploy by Macri to shore up the rightist “voto duro” ahead of Argentina’s mid-term legislative elections scheduled for later this year, by appealing to the xenophobic impulses of working class and middle class voters, who are suffering after a year of rising unemployment and economic insecurity. Critics note that the decree was promulgated without the benefit of Congressional approval—which could be challenging to obtain in an election year, with Macri’s party lacking a majority in either legislative chamber.

Like Trump, Macri is a right-wing populist leader who has ridden anti-immigrant sentiments to power, albeit under disguised auspices, as María Esperanza Casullo wrote for NACLA shortly after Macri's election. In 2010, as Mayor of Buenos Aires, Macri blamed the occupation of a city park on “uncontrolled migration” from Bolivia, and forcibly evicted thousands of squatters who were demanding affordable housing, leaving at least 4 dead and scores injured. A prominent clothing manufacturer owned by Macri’s wife and brother-in-law has been accused of exploiting undocumented Bolivian workers.

Macri’s ties to Trump stem from business as well as politics. As real estate developers in the 1980s, Macri and his father worked with the Trump family, their erstwhile business rivals, on a New York City project that they ultimately sold to the Trumps. Prior to his election, Trump was developing plans for a new tower in Buenos Aires, a project that is on hold for now.

While polls show that Macri’s decree has considerable domestic support, it has also galvanized a popular coalition in opposition that could extend to a broader range of domestic issues. Within the region, pushback from Bolivia, Paraguay, and the other Mercosur nations has already had some impact, with Macri and Morales agreeing to establish a bilateral commission to address Bolivia’s immigration concerns.

While regional politics are in flux, the consolidation of Macri’s identification with Trump due to their respective anti-immigration initiatives is not necessarily a plus for Macri, given the general disaffection with Trump in South America. Even Macri publicly supported Clinton during the U.S. presidential campaign. To the extent that Macri aspires to be the leader of a resurgent center-right in Latin America, turning against the common interests of his regional neighbors in favor of Trumpismo on the border could instead be a recipe for Argentina’s isolation.