Republicans have been some of the most vocal critics of Trump’s proposed cuts to humanitarian aid in Central America.
Tweet
Nancy Hiemstra
Border Wars
7/25/2017 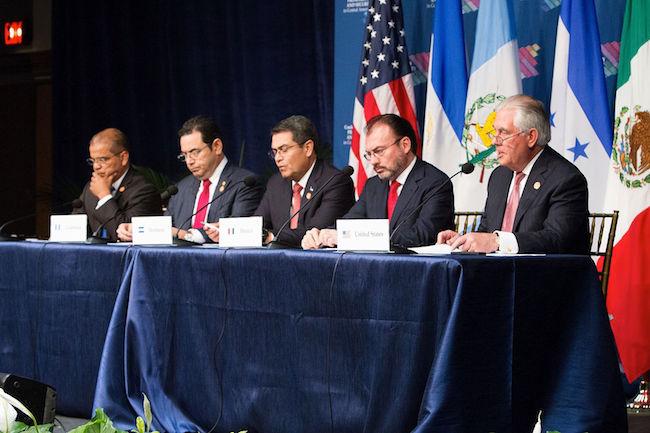 Donald Trump and his administration have made their intentions to “crack down” on immigration crystal clear, from calls for a border wall to an immediate expansion of the detention and deportation machine. With most of his anti-immigrant policies, Trump generally seems to have the unwavering support of Republicans in Congress. But he has faced bipartisan and Republican dissent when it comes to his strategy for stopping undocumented migrants before they arrive at U.S. borders – particularly in his proposed cuts to humanitarian aid in Latin America. Many Republicans see these cuts as harmful to the U.S. exercise of soft power in the region, making transparent the true aims of U.S. foreign assistance.

Immigration and Border Policing Under Trump: A National Security Issue

Many of Trump’s international border-policing strategies are simply a continuation or escalation of Obama-era policies. These policies include the Obama administration’s expansion of military and “security partnerships” with the Mexican and Central American governments, ongoing joint border control initiatives, and the provision of training and equipment to police and military units throughout Mexico and Central America.

Trump has also jumped on the Obama administration’s encouragement of the idea that private investment and corporations must play a role in improving living conditions and slowing outward migration in Central America. This encouragement culminated in the Alliance for Prosperity, an agreement between, El Salvador, Guatemala and Honduras—with significant encouragement from the United States, in 2014. The plan calls for $22 billion to be invested in the region to develop infrastructure, promote trade, exploit natural resources, and attract foreign investment over five years, with most of the money to come from Inter-American Development Bank loans and foreign investment.

Trump’s unswaying belief in privatization and foreign investment was on full display at the Conference on Prosperity and Security in Central America, in Miami this June, led by Secretary of State Rex Tillerson and Homeland Security Secretary John Kelly. The first day focused on “prosperity,” providing a forum for multinational corporations (such as Coca-Cola, Monsanto, and Walmart) and international financial institutions (including the World Bank, International Monetary Fund, and Inter-American Development Bank) to discuss investment opportunities with Central American leaders as a way to deter migration. But it did not offer any new funds to directly improve regional “prosperity.”

During discussions on the second day of the conference, which focused on security, the United States extracted promises from Central American countries to expand their own border policing, cooperate with U.S. operations, and accept additional training and equipment for such purposes from the United States.

Other actions by the Trump administration, in contrast to those regarding private investment and security, show sharp departures from Obama-era policies, and also signal dramatic breaks with longstanding approaches to relations with the United States’ Latin American neighbors. Secretary of State Rex Tillerson skipped the 47th annual General Assembly meeting of the Organization of American States (OAS) in June, sending a deputy in his stead— a decision that many interpreted as a snub to the organization. This was after the current administration boycotted a hearing of the OAS’s Inter-American Commission on Human Rights in March that questioned Trump’s policies on immigration and asylum, an action in line with Trump’s apparent relinquishing of the United States’ role as a defender of human rights.

In line with this attitude, Trump’s proposed 2018 “skinny budget” plans to cut humanitarian and development aid to Latin America and the Caribbean by 36% (including slashing funding for USAID by nearly 75% in Central America and 62% in the Caribbean), reduce funding for refugee services by over 30%, and zero out all money to the Inter-American Development Bank. In effect, the budget nearly eliminates money to address causes of immigration in the region, while maintaining State Department programs that directly contribute to security and military activities, including policing immigration. The impact of humanitarian and development aid has been critiqued for having a “negligible impact” on decreasing immigration due to misuse of funds, corruption, and competing agendas. But these programs at least projected the impression that the United States valued non-military solutions, and recognized a degree of responsibility in finding solutions for Latin American immigration.

In addition to these cuts, Secretary of State Rex Tillerson is planning to fold USAID into the State Department, to create one larger agency, which a former USAID administrator warns would deeply politicize foreign aid and detract from international diplomatic efforts. According to Adam Isacson, “Kelly’s department [DHS] has taken over the direction of security policy for every country north of Panama.”

Importantly, opponents of cuts to foreign aid and the State Department have been bipartisan and represented a number of interest groups– from religious leaders framing their disapproval on humanitarian grounds to efforts by Democrats for the U.S. to restore its role as a regional defender of human rights. Prior to the conference, 37 Democratic members of Congress also sent a letter to Secretary Tillerson, urging him to use it as a forum to insist on the protection of human rights.  Over 100 human rights-focused organizations from the United States, Latin America, and beyond signed a letter to Secretary of State Tillerson regarding the conference, beseeching him to foreground human rights concerns amidst any efforts to address the causes of migration.

Most Republican members of Congress have generally—and often enthusiastically—supported Trump’s anti-immigrant and hard-border policies. But contrary to what one might expect, some of the most vocal critics of Trump’s proposed changes to the State Department are from his own party. Six Republicans were among the 43 U.S. senators who sent a letter in April to ranking members of Senate’s Budget and Appropriations Committees, expressing support for continued “robust funding” of Congress’s proposed International Affairs budget, which the Trump administration’s budget slashes. The letter states, “deep cuts to the International Affairs budget would undermine our country’s economic and security interests, as well as the humanitarian and democratic principles we support.”

Secretary of State Rex Tillerson’s Senate testimony on June 13 regarding Trump’s proposed budget provoked outright derision. Republican Senator Bob Corker (R-TN), Chair of the Senate Committee on Foreign Relations, and a vocal advocate of tougher immigration and border policing measures, promised to block the proposed budget. “The budget that’s been presented is not going to be the budget that we’re going to deal with,” he said. “What comes out of Congress will not resemble what is presented today, so it would be a waste of time to go through it because it’s not what is going to occur.”

This open disapproval of the proposed changes is important for a number of reasons. First, in their rejection of Trump’s changes to the State Department and foreign aid, opponents are articulating—with unusual candor—the self-serving goals of foreign “assistance.” In February, Republican House Representative Tom Cole (R-OK) expressed distaste for the rumored cuts to the State Department budget, and explained, “People seem to think foreign aid is charity. It’s not,” Cole said. “It’s given largely in the interest of the United States.” While the United States has long used “humanitarian” and “development” assistance as tools of influence and intervention in the Americas, these aims are rarely stated explicitly. But former Bush-appointed USAID director, Andrew Natsios stated to Foreign Policy magazine, that by cutting development aid, “what you’re basically doing is eviscerating the most important tool of American influence in the developing world.”

These debates speak to a bipartisan perception that cutting development aid is “radical and reckless when it comes to soft power,” as declared by Republican Senator Lindsey Graham from South Carolina, Chair of the Senate Appropriations Subcommittee on State, Foreign Operations, and Related Programs, who called the budget proposal “dead on arrival.” In a February tweet, Republican Senator Johnny Isakson (R-GA) called the President’s proposed cuts to the State “unacceptable.” He said, “Soft power helps us achieve diplomatic goals of promoting democracy & high standards worldwide.” These members of Congress seem to understand that “soft power” is important for legitimizing and facilitating the exercise of “hard power,” acting as a kind of smokescreen for the more unsavory policies.

Indeed, Trump’s unwillingness to at least feign concern with human rights and an interest in regional diplomatic cooperation may already be eroding the United States’ position in the region. During the OAS meeting in June, the United States’ candidate lost in an election for the Inter-American Commission on Human Rights, only the second time a U.S. candidate has lost in the history of the IACHR.

The surfacing of the underlying goals of the State Department and foreign aid also offers a rare opportunity for public discussion of fundamental flaws and negative consequences of longstanding approaches to migration and border policing in Latin America. These approaches show continued failure to successfully address the real reasons for migration, such as poverty and violence—which are often linked to past and present U.S. interventions, the favoring private interests at the expense of human rights, and government instability and corruption.

Perhaps buried in discussions of soft and hard power is an understanding that the State Department and foreign aid monies ultimately make immigration policing—and dealing with its consequences—cheaper and less messy. Senate Majority Leader Mitch McConnell recently stated that any budget with steep cuts to the State Department would “probably not” pass. “I for one…think the diplomatic portion of the federal budget is very important, and you get results a lot cheaper, frequently, than you do on the defense side,” he said. By enlisting other governments in policing borders, the United States prevents more U.S.-bound migrants from reaching the U.S.-Mexico border and accessing rights and resources to which they would be entitled there.

The current Congress has already shown a willingness to defy Trump’s efforts to cut foreign aid. In a huge omnibus spending bill passed in early May that would keep the government running through September, Senate members worked in provisions to counter proposed cuts. In addition to continuing funding for existing foreign assistance programs and adding money for famine relief, one inserted provision required that the executive branch consult with Congress before any significant restructuring or closing of aid missions.

Congress is not ready to relinquish what it sees as a critical tool for extending immigration enforcement outside its own territory: a careful mix of hard and soft power. Donald Trump is trying to force a shift to a less nuanced approach, and a more open, aggressive militarization of border policing.  How much of his own vision Trump is able to push through will have profound consequences not just for immigrants, but for U.S.-Latin American relations at large.

Nancy Hiemstra is Assistant Professor in the Department of Women’s, Gender, and Sexuality Studies at Stony Brook University in New York. Her research focuses on embodied consequences of U.S. immigration policies in Latin America and the United States. She is co-editor (with Deirdre Conlon) of Intimate Economies of Immigration Detention: Critical Perspectives (Routledge, 2016), and she is working on a book about geopolitical reverberations of U.S. deportation and detention in Ecuador. Follow her on Twitter @NancyAHiemstra.