Joe Arpaio, A Devil in a Cast of Villains

President Trump’s pardoning of Joe Arpaio is despicable. But many politicians who have denounced it have also supported anti-immigrant policies and helped fuel the violent drug war in Mexico. 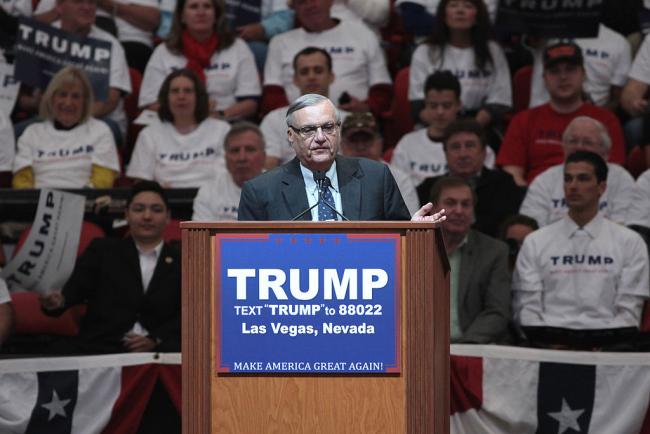 Growing up, I remember my Mexican family and friends hating Pete Wilson, the former Republican governor of California. I was too young to understand, but they hated him because he was a proponent of Proposition 187, an initiative that aimed to create a state-run system to verify the legal status of people accessing public benefits like public education and healthcare. Wilson wanted to officially make undocumented children ineligible for public education. Every time his name was invoked in my house, someone would follow it up with a string of expletives. I even remember my grandmother spitting on her own floor on one of these occasions.

Today, invoking former Maricopa County Sherriff Joe Arpaio’s name would probably elicit similar responses for similar reasons, and it’s easy to understand why. He’s terrorized Latinx communities for decades, he helped elect Donald Trump, and his sadism is nearly impossible to overstate: A former prisoner in Arpaio’s infamous “tent city,” an outdoor jail Arpaio boasted was a “concentration camp,” where temperatures sometimes reached 120 degrees, described the conditions he faced in a Washington Post article. “There was no cold water, only water from vending machines; and eventually, the machines would run out. People would faint; some had heatstroke. That summer, ambulances came about three times. One man died in his bed.”

On Friday, Trump pardoned Arpaio, sparing him the possibility of serving jail time for criminal contempt, a charge that began with a 2007 case in which a Mexican man with a tourist’s visa was wrongfully detained for nine hours. The man sued the Maricopa County Sheriff’s Office and Arpaio for racial profiling. But there were so many abuses that the case grew into a class action suit for all Latinx motorists in the county, which found that the Sheriff’s Office had racially profiled and unlawfully stopped Latinx drivers. Arpaio openly defied the court’s injunction, and after first being charged with civil contempt, was referred to a judge for criminal contempt. He was charged in late October 2016.

The pardon has understandably caused uproar among people whose communities have been affected by his cruelty. More complex to parse is the uproar it’s caused among members of our political class who want to signal their virtue by condemning him. Some, in the process, might want to absolve themselves of their own sins.

Joe Arpaio has been a recurring character in our sick American reality TV show. He’s had a two-decade career and is making headlines today. But it is important to recall that he gained national prominence as former President Barack Obama’s heel, and kind of scapegoat—an idea that’s often used in a more one-dimensional way to refer to individuals or groups that are blamed for things they didn’t do. What’s often glossed over, though, is what the scapegoat means for those doing the blaming: a community transfers its sins onto the scapegoat and then banishes or sacrifices the animal, thus symbolically cleansing the community of those sins. But scapegoating also means that the actual causes of those sins are left untouched.

Arpaio is no innocent sacrifice, but sending the Justice Department after Arpaio allowed the Obama administration to appear to be doing something for Latinx communities and immigrants. But at the very same time, his administration was topping off record-breaking deportation numbers, advancing border security policies that fueled the death and disappearance of thousands of migrants, and separating countless families for crimes like broken taillights. The administration was also funding Mexican security forces via the 2008 Mérida Initiative, despite many credible reports that the Mexican state was intimately involved in massacres and disappearances.

Indeed, government condemnations of Trump’s pardoning of Arpaio came from the mouths of lawmakers who have supported and benefited from policies fueling bloodshed in Mexico. For example, Congressman Luis Gutiérrez (D-IL), who today co-chairs the Congressional Hispanic Caucus Immigration and Border Issues Task Force, released a statement condemning the pardon, but has supported legislation that has been harmful to Mexicans and to immigrants. As a young member of Congress he, along with 203 other Democrats, voted to pass the Mérida Initiative in 2008, a security cooperation agreement between the United States and Mexico that helped Mexico to launch its own theater of the drug war. The results of the Mérida Initiative, modeled after Plan Colombia, have been horrendously violent. Since the launch of the Mérida Initiative, homicide rates have spiked—the Mexican government has reported that 164,000 people were murdered between 2007-2014, 61,000 more than the number of civilian deaths in Iraq and Afghanistan during the same period.

Meanwhile, Senator Richard Blumenthal (D-CT) received thousands of “likes” on Twitter for a string of tweets condemning Trump’s “disgraceful and immoral attack on the Courts and constitution” by pardoning Arpaio. But  Blumenthal has profited economically and electorally from the overwhelming violence of the Mexican drug war through contracting the Sikorsky Aircraft Corp., a source of local jobs in his district, to build military equipment to send to the Mexican army and police forces. In a press release announcing a Sikorsky contract with the Marine Corps, Blumenthal promised to “ensure that Connecticut remains the arsenal of our democracy—so critical to our national defense and our economy.” Through these contracts, Blumenthal has “been a “direct political beneficiary” of the overwhelming violence of this part of the drug war, as Christy Thornton, a historian of Mexico, wrote in Al Jazeera. Politicians like Blumenthal have a “political interest in increasing government contracts for the firms: not only to maintain the jobs that they bring locally but also to keep their campaign war chests full with contributions from the firms’ political action committees,” Thornton concludes.

Certain U.S. politicians repackage the same tired narratives – seeming to take a moral stance while quietly fueling violence— and roll them out again and again with great success. When Pete Wilson ran for reelection in 1994, part of his campaign was to endorse Proposition 187. Californian voters were split on the measure mostly along partisan lines, so when it came time for Democrats to campaign for local seats, then-president Bill Clinton made the rounds in November campaigning for his party and publicly opposing the measure, saying it would “punish the children.” And yet, two months earlier, in September, he’d announced Operation Gatekeeper, the border security initiative that radically shifted United States border policy to one of militarization, a shift that has killed thousands of people and continues to punish many children. A few months before that, in December of the previous year, Clinton had signed the North American Free Trade Agreement (NAFTA) into law, the economic pact that many experts credit with causing massive job losses and internal displacement in Mexico that, in turn, fueled migration to the United States.

Both Wilson’s and Arpaio’s assaults on immigrant communities have been cruel and brutal—there is not one shred of doubt about that—but we must understand these figures in their proper context: decades of bipartisan foreign and domestic military and economic policies that have created both the conditions that drive migration to the United States and the mechanisms to punish, maim, and kill those who make that trek North. In this sustained hemispheric assault against our communities, we’ve rarely found a friend in the U.S. political class instead encountering mostly the enemy vanguard and rearguard. Trump and Arpaio certainly occupy a special place in all of this, and they make a natural pair: two media-hungry racists who take every opportunity to reap the political gains of inflicting suffering on others. But it’s important to never lose sight of the fact that one is a bit player, and the other is just one of an ensemble cast.

José Roach Orduña is Assistant Professor of English at the University of Nevada, Las Vegas. His first book, The Weight of Shadows: A Memoir of Immigration and Displacement, was published by Beacon Press in 2016.